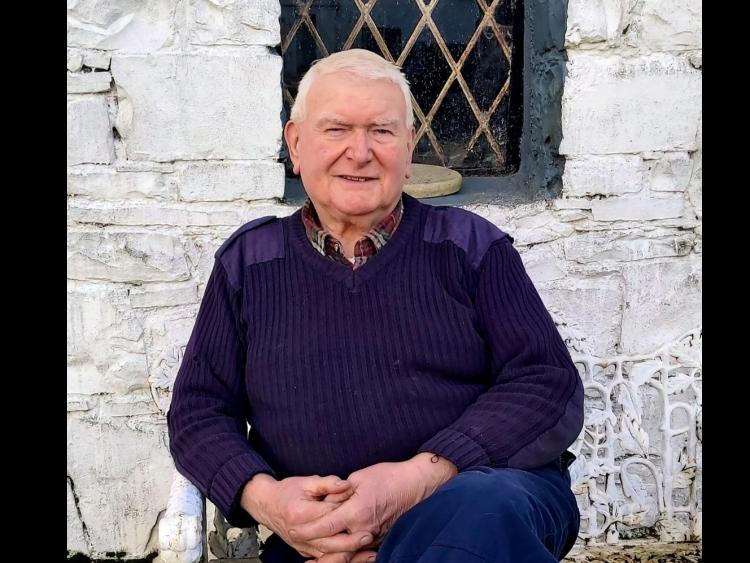 This week, Pat McCafferkey remembers five decades of life in Killeigh in the ongoing “People of Kileigh & Beyond” series.

My mother was a Hanley from Claremorris and met my father, a builder from Ballycroy, when she starting working in his local post office. They moved to Dublin in 1938; where my father continued in the building trade while my mother bought and ran a post office/drapery shop in Glasnevin. While the drapery shop is long gone, I believe there’s still a post office there.

With World War II escalating, my parents bought a farm in Athleague, Co. Roscommon and moved there shortly after I was born in 1940. Sadly, my mother fell ill with cancer and passed away in 1946. Soon after my father and I moved back to Dublin, he returned to building while I attended school at Passion Convent and then Marino School in Clontarf. My favourite subjects were History, Geography and English and to this day, reading remains one of my greatest passions. I love nothing more than rambling around book shops looking for a good read, and a bargain!

In 1952 my father left the building trade and bought a farm in Straffan. I attained my primary certificate (junior cert) in 1956, then started working the farm with my father. I spent a short time in Wales working on farms in 1963 before returning to Kildare to continue working on the home farm. Dublin in the mid 1960’s had a more appealing social scene than Kildare, so my friends and I would often go to the dances held in the city. It was at one of these nights out that I met my wife Marie who was training to be a nurse at the time.

We were married in 1970 and settled for a while in Kildare. However, I suppose wanting to start out on my own, I saw a farm for sale in the Irish Independent in 1971. We went to view the farm and were shown around by a local, Peter Nolan who lived just down the road. As soon as I saw the farmhouse in Newtown, with its farm buildings and fields around it, I fell in love with the place. Some of the land needed work but I was a fit and healthy 32-year-old, who was up for a challenge and I knew I could turn it into good grazing land. The house needed a lot of work and while we thought about building a new house, I’m glad we didn’t and it became the home where we raised our five children.

Moving to Killeigh in 1972, my first impression of the village was that it was a quiet place but had good facilities including a primary school; a recently constructed church; two shops; a pub; post office; and, a Macra Hall. It strikes me now that Killeigh village had more facilities back then than it does today.

Despite having not played hurling for a few years due to a bad knee, I found myself travelling one evening with Pat Spollen for a training session in Killurin. With the pressure of getting the farm up and running, I only played junior hurling for one year (1973) with Killeigh. David Lawlor was the trainer, I think that year and I remember training on the Green under the street lights. While it was only one year, I got to know many of the locals including John Cox who would help me out on the farm from time to time; he was a great man. As time went on, I became more involved in the local community and was persuaded by my neighbour, Dinny Plunkett to get involved with the local NFA (now IFA). I was Chairman of the Killeigh branch for a couple of years and got to know a lot of the local farmers.

Having attend a large meeting in the Macra Hall sometime in the late 1970’s, I became involved in the fundraising efforts for a new school in the village. Given the state of the economy in the 80’s, it was a long hard effort but driven on by an energetic Chairperson (Father Byrne) and a determined committee, the local community really got behind us. We had a monthly payment scheme, very much like the current Patron Scheme for the new community centre. I remember money was so tight, there was no raffle or anything like that, we just put all the money towards the school. We also held massive ‘sales of works’; two I think, in the Macra Hall and we finally reached our total which was 1/10th of the overall cost. Built on a site donated by the Parish, it was such a proud day for the whole community when the new school opened in 1988.

I continued being involved with the community doing a couple of years on the Parish Council. I also was part of the committee that came together to upgrade Graigue Bog; the plots firstly and then the access laneway. John Brady of Fenter was Chairman. It was tough work but many of the locals came together and there was great comradery. Despite not having a plot at Graigue, I remember Mick O’Rourke getting involved, and sure being Mick, he brought great energy and laughter to the work, along with a good deal on some gravel! To be honest, it was probably a nice distraction from the farm as the late 1980’s were tough times for farming. Back then, a lot of farmers in the area grew beet; we use to bring the loads of beet to Ard Station near Geashill. I remember there was a huge meeting of concerned beet growers in the Macra Hall when the industry was in trouble during the late 80’s. It was the biggest crowd I had ever seen in the hall.

Having been approached by David Lawlor, I joined the committee of the local Group Water Scheme in 1989. Back then, we use to have our meetings in the supper room of the Macra Hall and still to this day, I can feel the chill sitting in that room, you nearly needed an extra overcoat to put when you went in! As the condition of the Macra Hall deteriorated, we eventually had to stop using it and held our meetings in the Little Hall beside the old graveyard which wasn’t ideal but was certainly a lot warmer.

At that time, I was involved with the GAA and part of the fundraising efforts to purchase the field where the pitch is today. As I had the equipment, I sowed the grass seeds for the pitch. One of the most memorable events during my time as chairperson was a trip to Ballycroy in Mayo with the Junior football team. The further west we drove, the worse the weather got! It was so bad that shortly after leaving Claremorris after a bit of grub, the windscreen wipers broke off Billy Byrne’s bus but sure the wind coming from the west was so strong, that it kept the rain off the windscreen so we made it to the Mulranny Railway Hotel in one piece.

We may have only stayed one night but I think that was enough to leave a lasting memory of Killeigh GAA with the locals! I somehow managed to round everyone up and onto the bus the next morning for Mass. We were late but they delayed the Mass for us! Despite about a third of the pitch being under water, we won the match and had a presentation of medals in the Ballycroy Community Centre which had just opened. Ballycroy made a return trip to Killeigh to 1991 and levelled the score. That match was played in Heffernan’s field at the back of the national school and was followed by a mighty night in the local pub which was owned by Joe Malone at the time.

I suppose as I’ve gotten older, my involvement in the community has reduced. I remain a member of local Group Water Scheme and after 32 years, it would nice to have our meetings again in the Macra Hall, hopefully soon to be the Killeigh Community Centre.

I keep myself busy with jobs around the farm and continue to read; there’s still plenty of books that I’ve picked up over the years which I haven’t read. I enjoy learning about local history and have attended a couple of talks in the Mucklagh Community Centre about their area. Killeigh is steeped in history and it’d be lovely to have similar talks like that in the village.
In recent years, I have gone to the Christmas Party for the Killeigh Senior Citizens held in the Bridge House; they use to be held for many years in the Macra Hall. I have thoroughly enjoyed those events and it was nice to meet people that I hadn’t spoken to in a long time. I see other communities with active retirement groups or similar being held in their local community centres and if there was a group like that in Killeigh, I think it would be something I would enjoy being part of. It’s hard to believe its nearly 50 years since we moved to Killeigh and while I may not have grown up in the village, I’m glad to call it home.”