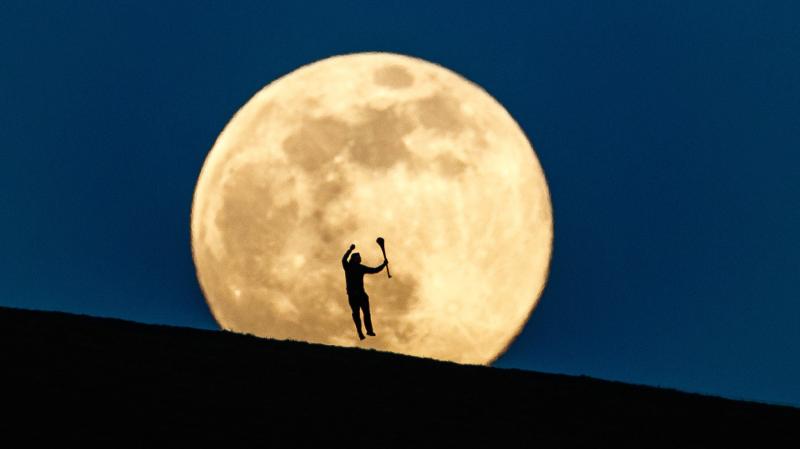 Ballycommon resident James Crombie has been named the ‘Press Photographer of the Year’ for 2021.

The ‘Press Photographer of the Year’ 2021 title was awarded to James Crombie of Inpho Photography, whose portfolio the judges cited as “A marriage of superb features work, creative portrait work and solid sports photography.”

James received two category awards – first prize in sports action for his sublime image ‘Foggy Semi-Final’ as fog descended during the All Ireland Senior Football Championship Semi-Final between Mayo and Tipperary and second prize in sports non-action for his iconic image ‘He is Risen’ taken as a fan watches St. Brigid’s play Boyle in the Roscommon GAA Senior Football Championship Semi-Final over a graveyard wall.

Also last year, James snapped the image at the top of this article, a hurler leaping to catch a sliotar silhouetted on the moon over Croghan Hill in Offaly.

Speaking about the awards, Crispin Rodwell, President of the Press Photographers Association of Ireland, said; “Many congratulations to our colleague James Crombie on being named the ‘Press Photographer of the Year’ 2021 with his tremendous portfolio of images.

"Tonight’s awards have been very different to how they are usually marked, but we are delighted to share the awards with such a wide audience online. I would also like to take this opportunity to thank everyone who took part in the ceremony and really brought it alive. It has been an extraordinary past twelve months in the country’s history, during which the members of the PPAI have served their vital role in producing a visual record of the pandemic, which will be preserved in the nation’s archives”.

To view the winning and highly commended images, which form the Press Photographers Association of Ireland ‘Press Photographer of the Year’ Exhibition please visit www.ppai.ie. Depending on government and HSE guidelines, the exhibition may go on tour to various libraries and venues around the country throughout the year.