FEATURE: Daffodils are like poetry on a bleak day in Offaly

A symbol of hope and rebirth 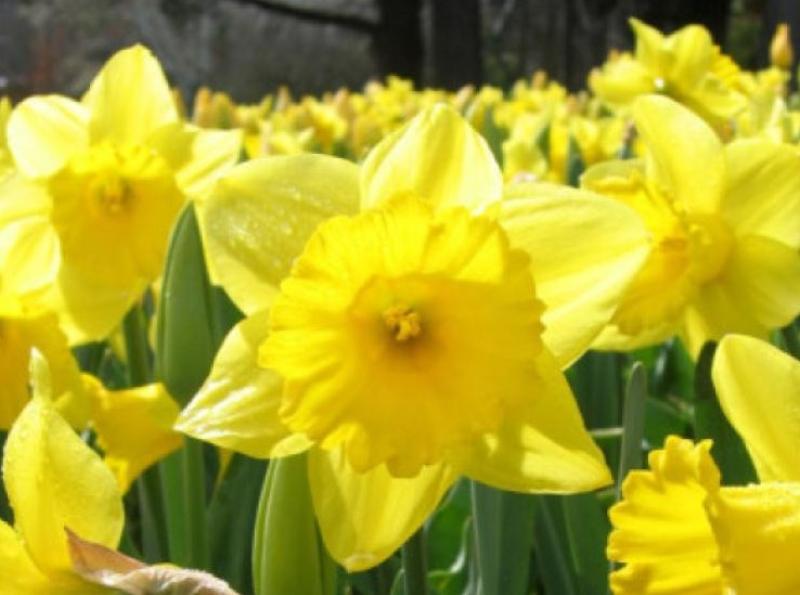 On a bleak, overcast day recently, when the dark stratus clouds covered the sky like a grey tombstone, and while feeling mentally weighed down by the neverending Level 5 restrictions, I turned a corner in the path and saw three daffodils in full bloom. This was most unexpected. I did not think daffodils would be coming out so early in the year. I looked around the large park. They were the only daffodils in bloom (since then they have been joined by dozens others and golden banks of the flower are now waving in the chill February wind).

When I saw my three, unexpected daffodils it gave my heart a jolt; a jolt upwards. My mood lifted and there seemed to be a singing in my chest. Nature's eternal secret was whispering once again in my ear, namely that no matter how bleak, cynical and stupid things may become there is a force for good and beauty in the universe, and it is this force which is our lord and master and which will have the ultimate say.

Part of the daffodil's charm is its gorgeous yellow colour, which exudes a warmth filling our minds with a sense of hope that better things are on the horizon. Sometimes the daffodil has to contend with frost and strong winds which makes its symbolism even stronger, because we too, being human, have to contend with the adversity of life, an adversity which can be minor or very serious indeed.

As we walk through the bleakness of a wintry day our minds can be stuck in sorrow as we look back over our lives, or in worry as we might be considering things like our financial circumstances, our enemies and an uncertain future. As Ralph Waldo Emerson said, “Sorrow looks back, worry looks round, faith looks up.”

It is in fact not uncommon to see daffodils in early February. The three daffodils I saw were unexpected to me because I had not been expecting the blooming of the flowers until late February. I was wrong in my expectations (as I often am) and it was a welcome surprise to see this symbol of hope when everything was feeling a bit rundown and absent of positive purpose. In the coming days and weeks we will see more types of flowers, bringing more beauty into our lives – primroses in the hedges and gardens, violets, early tulips in our gardens, forsythia, flowering trees (such as the much-loved and short-lived cherry blossom), camellias, and dandelions in our hedges and fields.

Daffodils represent rebirth, new beginnings and the triumph of life over death. Their Latin name also contains a warning for some of us. The Latin name is Narcissus who, in Greek mythology, was the son of a river god. Narcissus was handsome but arrogant (a character trait shared by many contemporary celebrities!) According to one version of the tale, as he was admiring his reflection in a pool he fell in and drowned, much to the satisfaction of the goddess Nemesis who disliked him. Narcissus is an example of the common human flaws of selfishness and self-obsession.

In England daffodils are also known as lenten lilies because they usually bloom between Ash Wednesday and Easter. (“And there's the Lenten lily”/ wrote the English poet AE Housman, “That has not long to stay / And dies on Easter day.”)

As well as symbolising creativity and renewal, daffodils can also symbolise inspiration, memory and forgiveness. For some the daffodil represents a sense of awareness and inner reflection. In China the flower represents good fortune, positive events and positive news. It is associated with the Chinese New Year. In Japan the flower stands for happiness and laughter. An old belief in Wales states that the first person to spot a daffodil in the spring will be blessed with gold.

It's also of course recognised internationally as the symbol of hope for all people affected by cancer. Last year the Irish Cancer Society had to make the difficult decision to cancel Daffodil Day as we know and love it due to Covid-19. People could make donations online, which will again be the situation during this year's Daffodil Day which is Friday the 26th  of March. “Funds raised during our Daffodil Day campaign,” says the Irish Cancer Society, “are used across the country to help the 44,000 people who will hear the words 'you have cancer' each year.”

We are very fortunate in this country to have the beauty of the Irish language enriching our lives. I find the sound of Irish a pleasure to listen to. As I was writing this article I looked up the words for snowdrops and daffodils. They are “plúiríní sneachta” and “lus an chromchinn”. As I whisper these words they are like music on the lips. I went looking for some poetry in Irish about Spring.

I came across a poem called “Cill Aodáin” (which is perhaps still taught in schoolrooms) by the 18th  Century blind poet Anthony Raftery and it immediately made me feel envious because Raftery is talking about travelling now that spring has returned (something which we obviously can't do). He's going to travel to Mayo and meet his own people there, something he is looking forward to because it will be a mental booster for him (again, we are unnaturally separated from our friends and relatives and yearn for contact with them). Again, as I speak the words of Raftery's poem it is like music in my mouth -

“Anois teacht an earraigh, beidh 'n lá dul chun síneadh. 'S tar éis na Féil Bríde, ardóidh mé mo sheol. Ó chuir mé 'mo cheann é ní stopfaidh mé choíche go seasfaidh mé síos i lár Chontae Mhaigh Eo. Is dá mbéinnse i mo sheasamh i gceartlár mo dhaoine d'imeodh an aois díom is bheinn arís óg.” This translates as, “Now with the coming of Spring / the day will be lengthening, / and after the feast of St Bridget / I shall raise my sail. / Since I put it into my head / I shall never stay put / until I shall stand down / in the centre of County Mayo / And when I am standing / In the midst of my people / My age shall fall away / And I'll be young again.” But, while I feel envious of Raftery's ability to travel and mingle with the people he loves, his life is a stark and tragic reminder of the harsh realities afflicting people in a world without effective medicine. Raftery was born near Kiltimagh in Mayo and his father was a weaver. Anthony was one of nine children. At some point between 1785 and 1788 their lives took a terrible turn when all the children contracted smallpox whose symptoms included coughing, headaches, high fevers, skin rashes and severe itching. Within three weeks, eight of the nine children had died. One of the last things which Anthony saw before he went blind was his eight siblings laid out dead on the floor. Considered in this context and in the context of his subsequent adult life which was often tough, the words of his most famous poem, “Mise Raifteirí an File”, are very powerful and inspirational in their sense of resilience: “Mise Raifteirí, an file, / lán dóchais is grá / le súile gan solas, / ciúineas gan crá / Dul siar ar m'aistear, / le solas mo chroí / Fann agus tuirseach, / go deireadh mo shlí / Féach anois mé / mo dhroim le balla, / Ag seinm ceoil / do phocaí folam.” Which translates as, “I am Raftery, the poet, / full of hope and love / With eyes without light, / silence without torment. / Going back on my journey, / with the light of my heart / Weak and tired, / until the end of my way. / Look at me now / my back to the wall, / playing music / to empty pockets.”