Sadness at passing of much loved Offaly nun 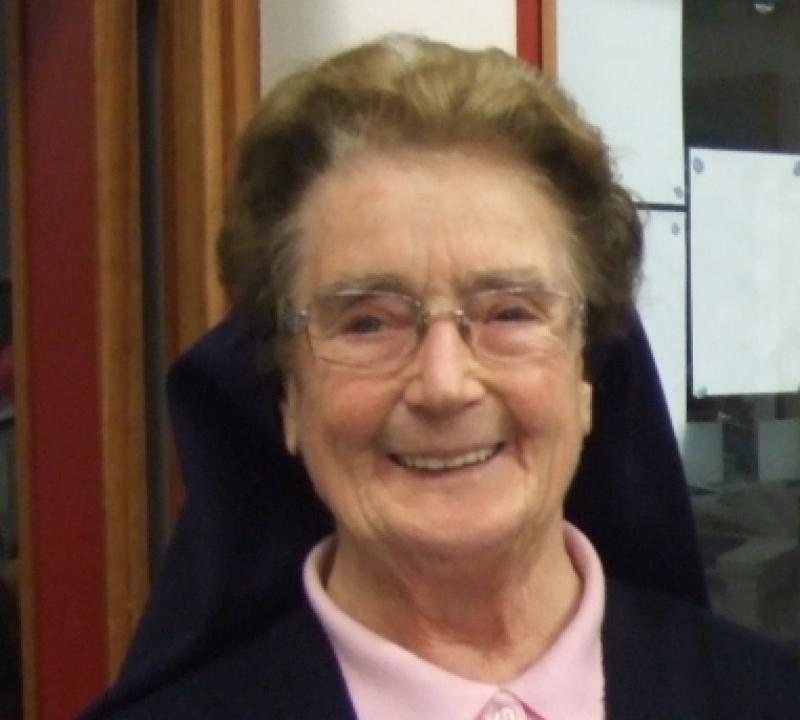 There was great sadness in and Offaly community at the passing of much loved nun.

It was with great sadness that the community of Killina learned about the passing of their dear friend and colleague,  Sr Áine Walsh, RIP.

Sr Áine's teaching career spanned over 70 years, and she would have no truck with the word or concept of retirement.  Sr Áine was the embodiment of the word vocation: her calling was to the Presentation Order and to teaching,  and she embraced both with a steadfast and inimitable energy and enthusiasm.

Known as Sr Immacula in Mullingar, Sr Áine spent 46 years as a teacher and principal  in Mullingar Presentation Primary School.  Following her retirement in 1989, she spent a further 13 years teaching in California, before settling in Killina in 2002.

Sr Áine's spirit and commitment to Killina Presentation Secondary School and to teaching was indefatigable.  Whether a student was struggling with Irish or Maths, or if a student had outstanding aptitude, Sr Áine would make it her business to help, guide, inspire and improve them.

There was no such thing as a challenge for Sr Áine- it was something intrinsic to her to help in a selfless,  humble manner.  It would be impossible to enumerate or measure the impact she had on so many students and colleagues.  There will be so many anecdotes that will come to light in the coming days- everyone who ever encountered her will be able to tell a tale about how she helped or encouraged,  about her kindness,  about her sense of humor and fun, about her humility and her humanity.

Speaking as a colleague,  there was so much about Sr Áine that was admirable and astonishing in equal measure.  Whenever there wasn't a computer free to look up a word or grammar point í nGaeilge, Sr Áine became the default go-to.  On the very, very rare occasion that she might be stumped,  she would be guaranteed to pop up somewhere the following day with the answer.  But it wasn't just in Roinn na Gaeilge that Sr Áine's presence was such a boon, but in staff meetings her contributions and suggestions always came with the weight of wisdom and experience, and always,  always permeated with the ethos and identity of the school.  In the teachers' WhatsApp today, there are certain words that are recurring: friend, inspirational, humble,  caring, kindness,  humor, spirit.

There's so much that could be said about Sr Áine's time in Killina since the early 2000s up to 2017, it's hard to fathom that even back then she had had an entire career before that, teaching both in Ireland and in the US.  Yet for us it felt like she had only ever been in Killina- she became an institution within our institution.  Whether taking a mainstream class or a resource class, or just working away  quietly in the background to support either a struggling student or an exceptionally gifted student, her resolution and determination shone at all times.

Occasional back trouble was only a minor inconvenience- the crutch would appear,  and so too would Sr Áine, day in, day out- nothing could stymie her unwavering commitment to her vocation.  Even in the summer months,  St Áine's contributions to Scoil Uí Cheallaigh embodied her love of teaching and our native tongue.  Indeed, her commitment to Score, Comhrá Gaeilge, and her involvement over many years with Coláiste na bhFian was testament to her love of, and pride in, the Irish language. She also found time to pursue her love of art, using painting as both a creative outlet and a pastime.

While many of us felt that the closure of the convent was a cruel blow to the likes of Sr Áine, she still maintained her interest in the school,  being in regular contact with staff and management, keeping abreast with all the developments and happenings in the school.  Perhaps a fitting final anecdote that is at once poignant and yet so uplifting, and sums the lady up- on Wednesday last, her last student, who she had been tutoring as an extern student for the November Leaving Cert exams, got the grade she required to pursue a teaching course.  Sr Áine was ebullient, but like so many previous success stories, it wasn't Sr Áine's style to draw attention- we can only assume the quiet satisfaction she derived from helping others fueled and inspired her to keep going,  and I have no doubt that once those exams were completed,  she would already be mulling over her next project.

While it was poignant to hear of the sad passing of Sr Áine the day after the school community celebrated the milestone of St Oliver's birthday, now we celebrate a legacy not far behind that of Sr Oliver, tinged with sadness though it may be.  Sr Áine being Sr Áine, I know she's reading this because she always had the school at her heart.  I know when the time comes, she'll upbraid me over this, because she hated any fuss or special treatment.  I know she and Ms Horan are debating the new Junior Cycle Gaelige  syllabus.  I know that she has left an indelible mark on the history of Killina Presentation Secondary School,  all the students she taught, and all the colleagues she taught with.