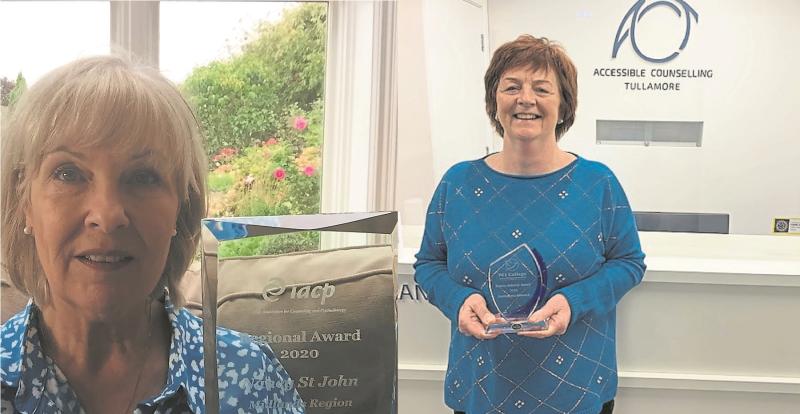 Community counselling centre, Accessible Counselling Tullamore (ACT), has had plenty of reasons to celebrate recently.
The centre which had its first anniversary on January 20 has been growing from strength to strength despite opening just before the Covid-19 crisis hit.

“2020 was a year like none of us have experienced and the global pandemic is greatly affecting people’s general mood and mental health. We have all had to cope with lockdowns and isolation from family and friends, businesses closing, uncertainty around work, illness, grief, anxiety, fear and many more issues. We are very grateful to have been open to give people a safe, confidential space where they could talk about their issues with one of our qualified counsellors,” said James O’Connor, ACT’s founding member.

“We are delighted to have our first year behind us and are looking forward to growing in 2021. We could not have made it this far without the support of the community. I would personally like to thank each person that organised a fundraiser in aid of ACT and to everyone that sent us a donation or donated to a fundraiser. As ACT receives no government funding we rely totally on the generosity of the community and we have been totally overwhelmed with the kindness we have received since we opened.”

Mr O’Connor was recently voted one of Ireland’s community heroes for overcoming his personal struggles to open ACT and was presented with a cheque by AXA Insurance for €20,000 for ACT on RTE’s Late Late Show. “I am far from a hero” he says. “The real credit goes to the great team we have at ACT”.

He was also awarded €5,000 personally which he has donated to nine other local charities and which he says “is just a token to acknowledge the great work being carried out by some amazing charities that are offering fantastic help and support to people locally.”

Mr O’Connor, who tends to shy away from the limelight, said “it was not easy” to speak so openly about his struggles with mental health on the Late Late Show.

“It is not something I like to do, but I make myself do it because if it helps just one person then it is worth it.”

He is also quick to point out that although he received the award, he could not have set up ACT without the input of a vast number of people.

“We received a huge amount of help and support in the setting up of the centre - from our unique logo which was designed by local artist Enrica Cullen to Josephine Rigney – Suicide Prevention Officer in the HSE who has been a great sounding board from the start and is always at the end of the phone. If I was to name everyone individually, we would be here all day.
“Although I am the one people associate the most with the centre, I am probably the one that does the least amount of work,” he laughed.

“I credit the success of the centre to my partner Lisa (Guing), who is in the centre every day and who did all the hard work in the original setting up of ACT and to our fantastic co-ordinator, Dympna Summerville, who is the backbone of the organisation and goes above and beyond every day to ensure ACT offers the very best service to each and every client that contacts us. We are so lucky to have her.

“We also have a great board of trustees who take care of all the governance, fundraising etc and a team of 11 qualified counsellors who so generously give their time to ACT and without whom the centre could not exist.”
In fact, James O'Connor is not the only one to have won an award as in the last few months two of ACT’s counsellors both won awards.

Nancy St John was presented with an award by IACP (The Irish Association of Counsellors and Psychotherapists).
Nancy is an accredited counsellor and supervisor and was nominated by the Midlands Regional Committee for her commitment and contribution to the field of counselling and psychotherapy.

Carthagena Minnock, who has volunteered in ACT since its opening, was also awarded the very prestigious Martin Kitterick Award from PCI College for her thesis titled 'Mental health and older adults in Ireland: Society in transformation'.

This award is given annually to the PCI College final year student who produces the most relevant, thoroughly researched and engaging thesis, of outstanding academic quality.

“We are so proud of both Nancy and Carthagena and are delighted that their dedication to their vocation is being recognised. We are so fortunate to have them as part of our team,” said Mr O'Connor.

At the time of writing ACT has just seen its 350th client and is currently seeing an average of 10 new clients a week.
“There are a lot of people struggling at the moment especially with this current lockdown and we are definitely seeing more new clients now than we were before Christmas, in fact we have extended our opening hours to keep up with demand and we now open until 8pm on Mondays and Wednesdays.

“Being one of the only community-based centres open face to face is something we are very proud of. We are fortunate that all our rooms allow for social distancing and we already had a one-way system in place, we also stagger appointments to prevent clients meeting and have implemented a strict sanitising regime to keep everyone safe.”

The ACT team are looking forward to 2021 and plan to keep learning and growing. Currently several of ACT’s counsellors are training to deal specifically with adolescents and will be offering counselling and psychotherapy services to 16 and 17-year-olds in the coming months.

“This is something we are very much looking forward to offering as we currently get an average of 2-3 enquiries from concerned parents each week,” said Mr O'Connor.

“I would once again like to thank the local community for their continued support and generosity and to everyone that helped make our first year so successful. I would especially like to thank all the clients that have used our service. Supporting you on your journey has been an honour and we look forward to continue supporting you in 2021 and beyond.”

Accessible Counselling Tullamore is currently open and seeing clients face to face for a wide range of issues including: anxiety, stress, bereavement and loss, relationship issues, anger, depression etc. For appointments call 057 9352879 or text “appointment” to 083 3555951.