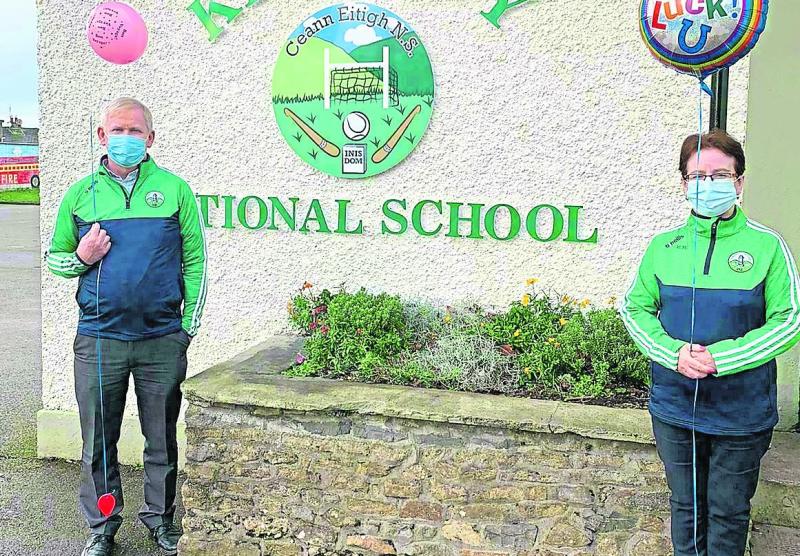 An Offaly school has bid a fond farewell to two teachers who retired recently.

Kinnitty School Community wished a fond farewell to teachers Marian Molloy and Michael Daly as they celebrated their retirement.

Mrs Molloy served a devoted 42 years in Kinnitty School Community. She began her teaching career in Cadamstown National School before the amalgamation of three local schools in the 1980s.

She founded the Green Schools Initiative in Kinnitty School and the school was awarded Irish Water Green School of the Year Award in 2015. Her legacy continues as the school strives towards a sixth Green Flag. Marian maintained a joyous enthusiasm for teaching and particularly enjoyed preparing the children for their sacraments. Marian’s kindness and quick wit was enjoyed by her colleagues and pupils alike.

Mr Daly worked in Kinnitty School for eleven and a half years, many of which he spent in Special Education. He shared his experience, knowledge and time generously with the whole school community. His calmness, wisdom and sense of humour were a consistent source of strength in the school. His commitment to Kinnitty school was reflected in his daily commute from Limerick City.

Careful planning, within the safety guidelines, saw that pupils, staff, parents and the wider community in Kinnitty got an opportunity to extend their well wishes to Mrs Molloy and Mr Daly.

The sun shone as the children performed their Christmas songs for Mrs Molloy and Mr Daly in the school yard. Mrs Claus arrived and greeted the children from outside their classroom windows.

The Board of Management Chairperson Leo Minnock, and Parent Association Chairperson Breed O’Brien made presentations on behalf of the pupils, parents and school community, among them a book of memories, pictures, photos and tributes from pupils, colleagues and members of the wider school community.

The staff presented the retirees with Kinnitty GAA tops, flowers and two of Ms de Forge’s delicious cakes. The children formed a guard of honour in the school yard as parents and staff clapped and cheered as Mrs Molloy and Mr Daly departed Kinnitty school for the last time. The outpouring of thanks, appreciation and well wishes was a fitting tribute for two much loved teachers who had a huge commitment to and love for Kinnitty School Community.