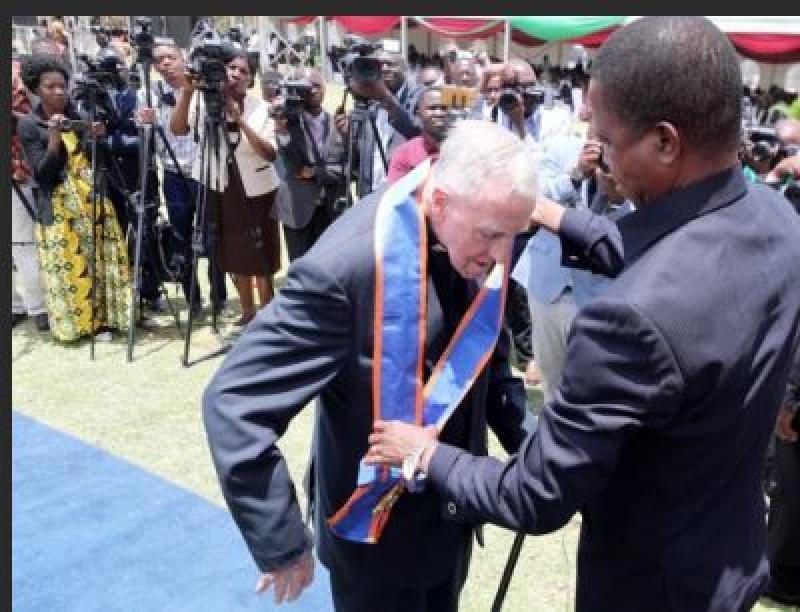 A renowned Zambian Jesuit priest of Tullamore origin, Fr. Michael Kelly has died at the age of 92.

His death was announced by Fr Leornard Chiti.

"It is with great sadness and grief of the loss of our companion, Fr Michael J Kelly SJ. Eternal Rest grant unto Michael and may perpetual light shine upon him,” Fr Chiti stated.

He was a past pupil of the Christian Brothers, Tullamore, the old school beside the canal. He studied at University College Dublin and was awarded a B.A. in Maths and Mathematical Physics in 1952, both with first class honours.

He went on to receive a licentiate in philosophy in 1955.

He moved to Zambia and has lived and worked here for over 50 years, becoming a Zambian citizen.

He worked for many years as headmaster of Canisius Secondary School is one of the earliest centres of learning in Zambia. It is located at Chikuni Mission about 10 km east of Chisekesi town in Monze.

Father Michael completed his PhD studies in the area of child and educational psychology in 1974 and subsequently became a senior lecturer and Dean of the School of Education in the University of Zambia (UNZA), in 1975.

The pioneering work of the Irish Jesuit, as an educator and a campaigner for HIV/AIDS in his adopted home of Zambia.

He is also a renowned speaker and advocate on HIV and AIDS, and has worked tirelessly to educate and promote safe behaviour among youth and those most at risk in Zambia, throughout sub-Saharan Africa, and much further afield.

He was also active in other policy areas, such as strategies for HIV prevention, and human rights.

A prolific researcher and writer, Father Michael has authored 15 books, and many original research articles.

Throughout his long and distinguished career, Father Michael has worked as a consultant to organisations such as the World Bank, UNESCO, UNICEF, the FAO, UNAIDS, Oxfam, Irish Aid, and many more.

Over the next 60 years, he held a series of appointments across the country, which resulted in his nomination as Deputy Vice-Chancellor of the University of Zambia in 1980 and a promotion to Professor of Education in 1989.

He worked tirelessly to get rid of the stigma of HIV/AIDS through education and advocacy work across Zambia and further afield.

Fr Kelly was Patron of Power4Good since 2010 and inspired the group's fundraising work for projects in Zambia with children   with disabilities.

Volunteers were planning a trip to Zambia in 2020 but due to Covid the trip had to be postponed.

Fr Kelly has been the recipient of many awards, in Ireland and abroad for his aid work. In recognition of his contribution to education in Zambia and worldwide HIV advocacy, the Association of Commonwealth Universities presented him with the Symons Award in September 2003.

In 2013 Fr. Michael was recognised in his home town at a civic welcome and citation at Tullamore town hall in honour of his "International contribution to education and health in the developing world ".

Local charity Power4Good, working to support education for children and adults with disability in Zambia and Malawi, was proud to have Fr. Michael as patron for many years.

He has received several honorary degrees including Doctor of Science (2004), from the University of the West Indies, Doctor of Laws from NUI (2006) and an honorory doctorate from the Royal College of Surgeons (2012).

He received the Presidential Distinguished Service Award from President Michael D. Higgins at Áras an Úachtaráin in November 2012, which honours the Irish diaspora in recognition of its sustained and distinguished service abroad.

Describing Fr Kelly as a “true hero”, President Higgins, in a tribute this week, said: “As an academic, writer and educator, Fr. Michael made an immense contribution to improved health outcomes for many people in Sub-Saharan Africa. Through his work with Irish Aid and several multilateral organisations, he was an inspirational figure to health workers, aid workers, humanitarians and diplomats from Ireland, Zambia and beyond.

I was honoured to present Fr. Michael with the Presidential Distinguished Service Award for the Irish Abroad in 2012. In 2018 he received the Order of Distinguished Service Award from President Lungu of Zambia, in recognition of his contributions to the promotion of education, social justice and HIV/AIDS. His image featured last year on a stamp by An Post as part of their series celebrating the achievements of the Irish abroad.”

In February 2020 Fr Michael was featured on a stamp, part of a collection produced by An Post,  paying tribute to the Irish abroad.

Fr. Michael will be fondly remembered by his family and his many friends in Tullamore and beyond. May he rest in peace.