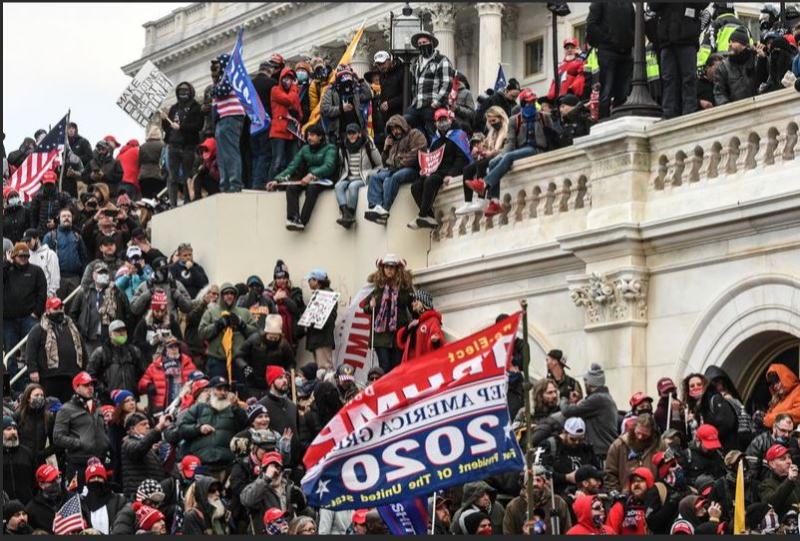 THE world looked-on aghast as events unfolded in Washington D.C. last week when a violent mob of Trump supporters, far right and neo-Nazi elements together with conspiracy theorists stormed the Capitol in an attempt to subvert American democracy.

The action of the rabble, encouraged by President Trump and his acolytes, was a frightening demonstration of just how quickly a democratic society can be subverted from within.

For years commentators have warned us about the nature of many of Trump's support base while others dismissed these warnings as lazy stereotyping by the media.

A significant and vocal element of Trump's support base is composed of violent racists and far-right extremists intent on destroying American democracy.

These elements have been encouraged and nurtured by false news and conspiracy theories found on the wilder and darker fringes of the web.

Interviews with Trump supporters in the wake of the U.S. election showed that many of them believed the election had been stolen due to the insistence of the President and untrue stories peddled on the web.

We can laugh at the gullibility of these supporters but many people here in this country have also been led to believe untruths by stories circulating on the web and on social media platforms.

Trump delighted in attacking the traditional media, particularly the world-respected New York Times, with his taunts of “fake news”.

The President detested being held to account by professional journalists in mainstream media titles who had the courage to investigate and call out his lies.

The events in Washington last week, and the threat of further demonstrations around U.S. cities on inauguration day next week, should highlight to our political, business and civic leaders the vital role mainstream media plays in a democracy.

Traditional media has been in crisis since the advent of the web with many titles forced to close down, even here locally in the Midlands.

But the expertise built up by newspapers together with the judgement and balance so central to professional journalism still have an all important role to play in our democracy.

At a local level, the Tribune and other titles across the country provide a vital service in the community, a service which is all the more important in this era in the light of the misinformation which is sometimes peddled as fact on social media platforms.

As such the Government must examine ways in which it can protect and support our respected media platforms staffed by professional journalists who are committed to publishing the truth in the news.

Irish newspapers, local and national, and the journalists who work for them, are the voice of our people, their communities and regions. Support for Irish journalism matters now more than ever.

The #JournalismMatters campaign in the past has called on the Government to deliver on a five-point-plan for the industry:

*Apply a 5% VAT rate to newspapers and digital products, ahead of ultimately reducing to 0% once EU laws allow

*Reform Ireland’s draconian defamation laws to ensure that the stories that need to be told, are told

*Invest in a training support scheme for all journalists

The future of Irish journalism is at a crossroads and Government inaction now is simply not an option as the events which unfolded in the United States last week show.

Without the supports and investment, and clarity on VAT rates, the sector will not be able to thrive and invest, but will falter and publications will be forced to close or at best scale back on the good, independent journalism that has been a bedrock of Irish democracy.