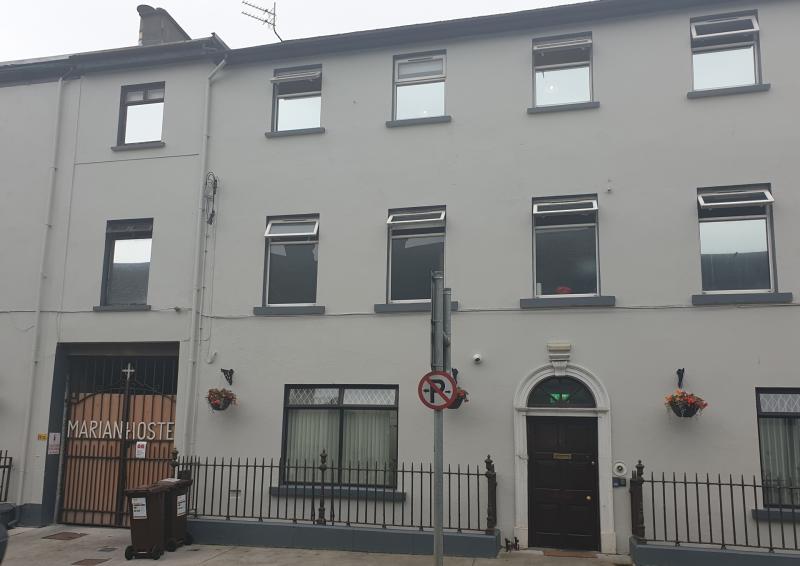 The direct provision centre in Tullamore

A RESIDENT of the direct provision centre in Tullamore who has tested positive for Covid-19 has warned that the facility is a “time bomb”.

The 29-year-old asylum seeker has been moved to quarantine at the Citywest hotel in Dublin so he can self isolate.

The man was tested on Friday and when he received his result the following day he was told he must stay in his room and not have contact with anyone for 10 days.

He was told there was a “high risk” he could spread the virus to other people.

His wife was then tested and this afternoon (Tuesday, January 12) she was told she had also contracted the coronavirus.

She is staying in a separate room in Citywest.

The man was very concerned at being asked to walk from the direct provision centre, High Street, Tullamore, to the Covid-19 test centre on the Clonminch Road.

“There were not enough staff to come to my place of stay,” he said, referring to what he described as a “serious organisational problem during the testing process”.

The walk took more than 20 minutes and he believed he should have been transported there instead “in the name of public health”.

He said himself and his wife did not have “special” transport when they were being transferred to Dublin and were instead brought by taxi.

He said he had voiced concerns previously about potential outbreaks of Covid-19 at direct provision centres.

“Ireland sits on a time bomb,” he said. “People must be provided with places where they can be properly isolated. These places are not only vulnerable to Covid, but all kinds of epidemics.”

Speaking to the Tullamore Tribune on his second day at the Citywest hotel, he described the staff there as heroes.

“The heroes here call me every day and ask about my situation. They are workers at the front and we owe them a lot,” he said.

He also praised the staff at the Tullamore centre, formerly the Marian Hostel, for their “quick reflex” when they realised his situation but he remained concerned about the dangers associated with direct provision centres.

“Those who work there are also a true hero. They show great devotion, but as I said, a great wrong cannot be made right with great devotion.”

He believed direct provision centres “threaten public health” and he said an emergency action plan should be developed to address the issues associated with them.

Another resident at the Tullamore centre said all of the residents were tested in November and no positive cases were found.

He had been moved from a centre in a different part of the country and he believed the Tullamore facility was safer because it has a number of separate entrances and separate accommodation units.

In February last year the Department of Justice confirmed its intention to locate an accommodation centre for applicants for international protection at the Marian Hostel in Tullamore with a capacity for up to 168 people.

In addition to the Marian Hostel building, accommodation is also being provided in houses across the street.

The department said the centre would provide residents with ‘independent living’ where they would have their own cooking facilities.

Responsibility for direct provision passed to the Department of Children, Equality, Disability, Integration and Youth late last year and it told the Tribune it does not comment on specific Covid-19 cases or outbreaks.

A spokesman said the department is guided by the advice of public health officials in each community health organisation area as regards how cases of Covid at centres in their region are to be managed, including decisions on when and where off-site isolation is deemed necessary.

“Where off-site isolation is deemed necessary, a resident is moved to the off-site facility and supported while there,” the spokesman said.

“The department will continue to work with the HSE and the Department of Health in the best interests of all residents whilst we remain in the midst of this unprecedented pandemic.

“The health and wellbeing of all residents during the pandemic remains the highest priority for this department.  To that end a wide range of measures have been put in place across the accommodation network to address any Covid-19 related issues should they arise.  “These measures were implemented in collaboration with the HSE and informed by regional public health officials and infection control teams.”