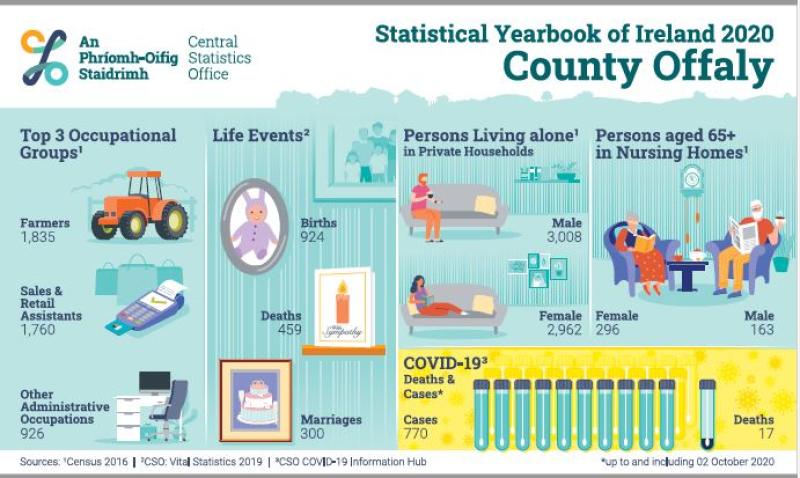 The third of the top three occupational groups is formed of the category other administrative occupations which numbers 926.

The Central Statistics Office (CSO)last week published The Statistical Yearbook of Ireland 2020, to mark World Statistics Day and European Statistics Day on 20 October.
The Yearbook presents a comprehensive picture of Ireland, based on statistics published by the Central Statistics Office throughout the year. Many of these statistics are based on information provided by the thousands of people around the country who have completed our surveys and we thank them for their input and look forward to the continued support of our Household Surveys.
The CSO has created individual infographics for each county similar to the one on Offaly which is published above.

The statistics show there were 924 births in Offaly in the period under review, 450 deaths and 300 marriages.

A total of 770 Covid cases were recorded up to October 2, including 17 deaths.

Almost twice as many women over 65 were in nursing homes in the county but the number of men living alone slightly exceeded those of women.

Clothes or sports goods  were the most popular online purchase in 2019, purchased by more than half (51%) of internet users.

In 2019 75% of people said they felt ‘very safe’ or ‘fairly safe’ walking in their local area at night, however this feeling of safety was considerably lower for females (64%) than for males (87%).

In 2020, (excluding Other/Not Stated) 43.4% of those aged 15 to 64 years had a third level qualification while 5.9% had not progressed beyond primary level education.

Some 15.1% of people are considered to be experiencing ‘enforced deprivation’, which is defined as not being able to afford two or more basics, such as heating the home adequately or eating a meal with meat, chicken or fish every second day.

Median net wealth for owner occupied households is €287,800, significantly higher than the €6,500 value for rented households.

Leitrim was the only county with  less than 100 dwellings completed in 2019 at just 41.

In 2019, food, beverages and tobacco accounted for €18 billion of Personal Consumption Expenditure, which was 16% of the total figure.

In 2019, total exports of merchandise and services amounted to €448.9bn. The largest trading partner for exports was United States (€98.3bn) followed by United Kingdom with exports of €56.2bn and Germany €34.9bn.

The value of exports in 2019 increased to €152,490 million compared  with  2018 and represented the highest level of exports on record, of which chemicals and related products accounted for 61% of all good exported.

Ireland imported 59% of its total goods from the EU in 2019 and the single largest supplier was Great Britain, from which 21% of all goods were imported.

The most popular destination to and from Ireland's main airports was London-Heathrow with over 2.5 million (2,505,600) passengers travelling on this route in 2019.

As regards the ongoing Covid-19 pandemic, the Yearbook records that those affected by the virus has changed over a six-month period since March 2020: Men and women are now almost equally likely to contract the virus and the percentage of cases amongst younger age groups has increased in more recent months with confirmed case rates in people aged under 24 at 34% in September compared with less than 10% in March and April

Health care workers made up 7% of all confirmed cases in September from a peak of 36% of all cases in April.

Since the beginning of the Covid-19 pandemic, just under half of the population aged 15 years and over (47%) have seen their employment situation affected in terms of loss of employment, temporary layoff, change in work hours, remote working from home or change to business model to online/takeaway etc.

Employment impacts have been most felt in the age group 35-44 years, where two-thirds report employment effects.

The pandemic had a dramatic effect on retail sales in Ireland. From February 2020 to July 2020 the seasonally adjusted highest monthly decrease in the volume of sales (-35.8% in April 2020) and the highest monthly increase (+38.5% June 2020) were recorded.

Since April, the volume of cyclists recorded in Dublin outside peak hours has increased when compared with 2019; there were increases of 9.9% for the months of June and August.