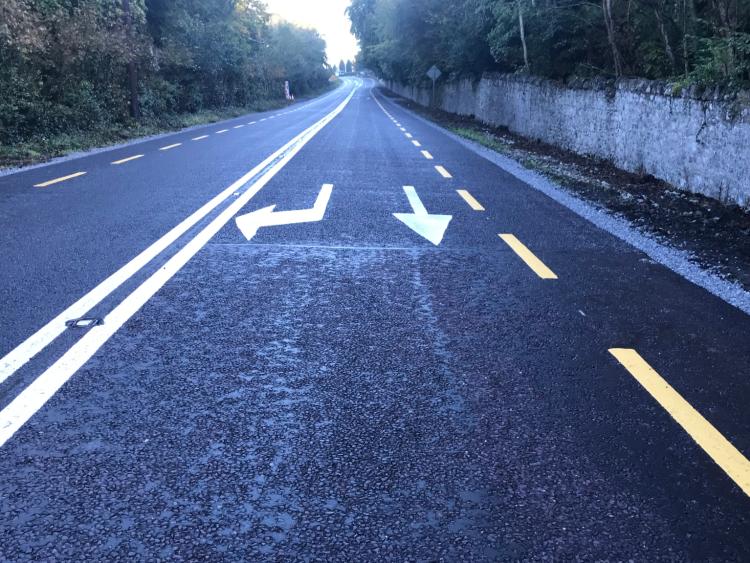 Serious concerns regarding the new layout and Transport Insfrastructure Ireland (TII) guidelines on the N62 at the Coolderry, Glasderrymore and Brosna junctions have been voiced, following recent works along the major road between Birr and Roscrea.

The recent works on the N62 Boveen to Dromakeenan pavement scheme was a 2.5km pavement resurfacing scheme for the TII on the National Secondary route. The scheme completes the improvement of the N62 south of Birr over the last few years and results in a high quality road resurfaced for the next 15 years.

However, Cllr Peter Ormond told the 'Midland Tribune' he had a meeting with residents from Brosna recently to discuss the layout of the junction on the N62 at Brosna. “This issue has been there for approximately 10 years and various elements of the road have been changed over that period. When this road was previously resurfaced, there was the same issue and then the NRA made some small changes to the lining and it improved somewhat. What is proposed at the moment is back to the original way it was six to seven years ago.”

Regarding the Coolderry junction, Cllr. Ormond stated that when drivers come down the road from Coolderry, they have to stop completely at the junction and start from zero miles per hour when heading towards Roscrea.

“Given the volume and speed of traffic on this road, this is proving quite difficult and traffic is up upon you immediately as you go from zero to fourty miles per hour. I have asked for this junction to be reviewed and the hard shoulder be extended to allow traffic to move off slowly from the junction. People are also afraid that traffic travelling from Birr have no space/room and this will result in cars coming behind rear ending those turning off.”

Cllr Ormond also stated the residents of Glasderrymore have expressed similar concerns as the residents from Brosna and Coolderry junction regarding turning right into Glassderrymore when you come from the Roscrea direction.

Cllr Ormond explained he had several conversations with the roads section of Offaly County Council and they informed him last Thursday that Offaly County Council will commission “immediately”, an independent Stage 3 Road Safety Audit of the works, so as to advise on the best approach to the junction while also complying with current guidelines.

"As part of this, the option to widen the road by 2m for a set distance with appropriate lead in and out tapers while still also allowing for cyclists /pedestrians, or the provision of a right turn lane can also be examined and provided, if it meets the appropriate current TII standards.

“I was also informed that on advice from the TII the road lines were reinstated in accordance with the latest guidelines however concerns over the junction are noted and to address those concerns we have engaged with the TII Road Safety Scheme team.” Cllr Ormond stated the paving scheme was carried out to a high standard, but the above issues have caused serious concerns for residents who use these junctions on a daily basis.

“I welcome this Stage 3 Audit of the Brosna Junction and I look forward to further discussions with the Roads Section of Offaly Council, the TII and the residents of Coolderry, Brosna and Glassderrybeg. The safety of our people is paramount to everyone and we must ensure that our national guidelines provide safety measures for people travelling on the road and people exiting the road.”