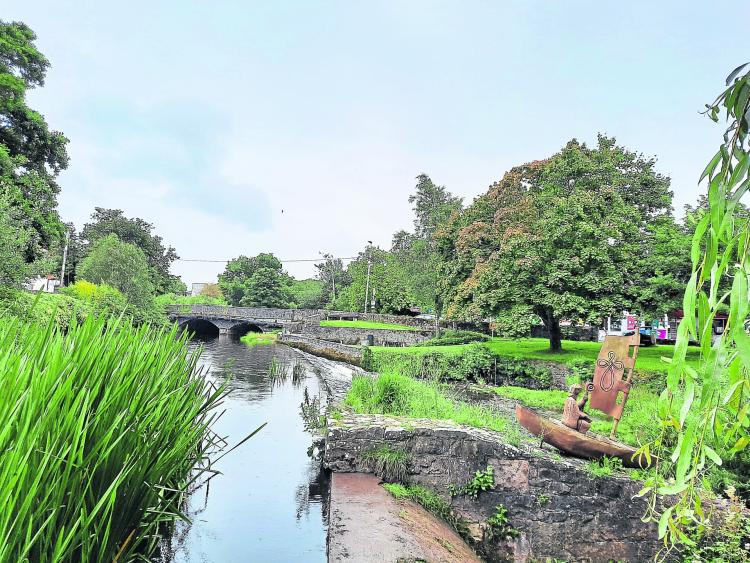 Plans for a major collaborative project aimed at enhancing and improving the river Camcor as well as bringing it further into the public awareness will be completed by November.

The river Camcor flows through the heart of Birr town and the extensive project is being compiled as part of efforts to raise awareness of water quality and getting people to put value back in their local waterways.

Speaking at the October meeting of Birr Municipal District, Basil Mannion, the Community Water Officer for Laois, Offaly and Westmeath updated the members on the new innovative project.

The project relates to a 5km stretch of the river from Springfield Bridge to Croghan Bridge, outside Birr, through the Birr Castle Demesne, and involves a number of organisations including Birr 20:20, Birr Municipal District, Birr Tidy Towns, Offaly Heritage and Offaly Leader.

A tendering process for the project was held in March and was won by JBA Consultants, who have already undertaken a vast body of work over the last number of months since it commenced in May. According to Mr Mannion, it's hoped the project's outcome will be finalised by November.

The project, totalling €25,000, is being funded by Offaly Leader through the Rural Environment Scheme.

“The main purpose is to provide a comprehensive suite of practical projects, which form a single plan for the different stakeholders to make use of the river going into the future. We are looking at management of the river, the river corridor within Birr town, balancing public amenity, water quality, biodiversity, wildlife and we are also looking at providing access for walking, amenities, activities between Birr Castle and the Springfield Bridge.”

“We are looking at the provision of guidance and assistance to both Birr Municipal District and Birr Tidy Towns on how we can better manage the river as it flows through Birr particularly in the areas under the control of Birr MD.”

Mr Mannion said the river Camcor is or “should be a key focal point for the people of Birr” as it flows right through the heart of Birr town before outlining the importance of the river.

“There has also been historic straightening, which has led to erosion at some areas and the channel itself and its associated flood plains, which are important and have a huge value to the urban centre of Birr because of amenity, recreational, visual and biodiversity values.”

“Public interaction and participation at the river in Birr could always be better, which is a common feature of similar towns with a body of water flowing through it.”

It is hoped that as part of this project that a number of key locations and design recommendations for “appropriate bank works” will also be made".

" These will help with improving local access, fish stock numbers and the overall quality of the river. We are looking at proposing sustainable drainage works and a number of proposals. We are looking to develop guidelines for the more formal settings of the Camcor river park in Birr taking into account the best available practice of the All Ireland pollinator plan, which is key to the Birr Tidy Towns and also integrate river bank management, which the Tidy Towns can use as well as Birr MD.

“We are also looking to design specific guidelines on river side access, from Springfield bridge and continuing it through the Birr.

“The key outcomes is to identify potential routes for the development of a possible walkway along the bank of the river, through the park in Birr and then back into Birr in a loop, followed by infrastructural measures that will add to the amazing value and improve the accessibility of public paths along side the river.”

It is also hoped to identify areas along the river where water protection measures can be developed and monitored into the future.

According to the Community Water Officer, a list of projects are also being developed as part of this project including river bank management for the Birr MD, the restoration of meanders that were previously strengthening, enhancing the river channels that are flowing into the river, enhancing artificially straightening channels, restoring the bank area and managing over land flooding in certain areas, flood plains being developed as wetland features in the area while providing access to the river and helping to protect endangered species.

“Again, the collaboration is a huge plus with projects of this nature. The key component here in the project design is an earnest and strong tendency for good public consultation from all the relevant stakeholders and land owners, which has to be good and strong, if we are going to create an effective plan going forward.”

In providing the overview of the plan, Mr Mannion said that stakeholder consultation was ongoing and that a number of studies including hydromorphology works had been undertaken over the number of months, which included site visits and landscape design. “ There is also a focus on the project on the paths and lighting along the river in the town. We are trying to factor in all possible elements. Again, the public consultation will feed into this as well in the final plan.”

Cllr John Carroll thanked Mr Mannion for his presentation before pointing out that often “we don't value what an asset having a river flowing through a town is”. “It will be great to see how we can harness this to our best advantage for the people living locally but also in attracting tourists.....”

“We are starting with a good product, because it is so fresh and clean. There is a lot of work to be done and I think this is a good step forward. It will be step by step and it is an asset that I hope to see it will be a huge asset and amenity to the people of Birr and visitors to Birr.

Cllr Peter Ormond welcomed the study. “Anywhere there is a river in a town, it is an attraction and in terms of Tidy Towns it always adds to their points and also from the point of view of tourist enhancement. There is great potential here with this 5km for tourism enhancement. This study is going to set out a roadmap going forward and provide a comprehensive suite of projects going forward.”

However, Cllr Ormond wanted to mention the management of the river and what were the plans for this going forward and what were the ideas for the further enhancement of activities taking place on the river. “We have to be conscious of balancing this with the wildlife plan, the biodiversity plan and the All Ireland pollinator plan, which are important to Birr Tidy Towns and also, the fish stock in the river.

"It is important and difficult to get all those aspects right but I think that we are going to have a plan going forward and it will be up to us as a local authority to try and implement some of this plan when it does come out.”
Cllr Ormond then pointed out whether this project was mentioned as part of the discussion and development of the Birr Destination Town Funding project.

Cllr John Clendennen complimented the “positive energy and the willingness to push this on and it is great to see”. “It is going to be another feather as a local amenity as a tourist activity within the town and the area. It is also important that it's linked back to the castle so that we can capture an audience to potentially do a loop around the town. One of the biggest challenges that we have is to get some of those 100,000 visitors that go to the Castle and get a large percentage of that down the main street or on trails and seize the commercial opportunity from that.”

Cllr Clare Claffey believed the plans were “great for the town and tourism enhancement within the town” before asking whether local disability groups were consulted as part of the preparation process.

Cllr John Leahy, an Cathaoirleach of Birr Municipal District concurred that it was great that it was community drive and respected what was being achieved with the plans.

However, he then raised the issue of flooding along the river. “Perhaps, this might not be within your remit. And, while tourism is important I think that we have to get the balance right between this and protecting people's livelihoods..... Because I am finding that the minute the Camcor is mentioned that all I am getting in terms of the farming community is that fact that their land is flooding on the backs of work that is not being carried out. And, while this is great as to what you are doing, this is what I am getting on the ground.”

Mr Mannion didn't disagree with Cllr Leahy. “At the end of the day it is about trying to reach a compromise and a common goal, which is to try and reduce flooding impact, improve water quality and try and get people back in touch with the water body that perhaps, we have lost over the last number of decades. This is, perhaps, a 5km in the middle of Birr and all going well and ideally, I would love to see moves further upstream and tackle other issues. But that is another day. For the moment, this is a good positive project where there is good collaboration on it,” he concluded.