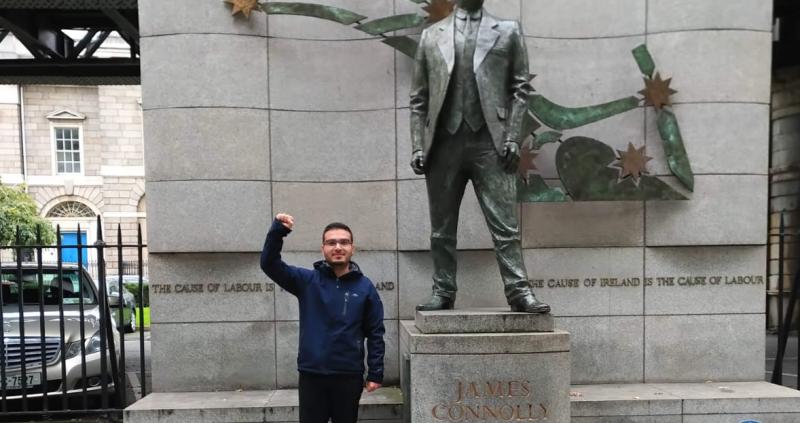 Cagdas Gokbel pictured at a statue of James Connolly in Dublin

IRELAND'S direct provision system has been strongly criticised by an asylum seeker with first hand experience.

Turkish journalist, Cagdas Gokbel, who is based in the direct provision centre at the former Marian Hostel in Tullamore along with his wife Emine, said you “cannot expect a human oriented system from a profit oriented organisation.”

He said that a “new and healthy system” must be put in place without delay.

Describing the centres as like “horror movies”, he alleged that women and LGBTQ people in these centres had to face “various pressures and bullying.”

Referring to the ongoing Covid pandemic, he said: “You cannot fight an epidemic in a living space where people have to use shared toilets, bathrooms and kitchens.”

“Such places pose serious dangers not only because of coronavirus but also because of other diseases. You may think that the people staying in these centres do not belong here but these people live with you. We are sitting on a bomb that is waiting to explode in Ireland,” he told the Tribune.

He warned that the health of old and young Irish people was being endangered.

“In an epidemic that will spread from the centres, not only refugees will loose their lives, but the whole of society will be adversely affected,” outlined the Turkish journalist.

He called on TDs and politicians to come and view direct provision centres “with their own eyes.”

He said it was not just the task of churches and non-governmental organisations to show real solidarity with asylum seekers.

Cagdas Gokbel said he and other asylum seekers wanted to integrate into Irish society but “language education” was essential for that process to develop.

He recalled he and his wife had endured a lot of 'stress and general sadness” when they first arrived in Tullamore during the Covid lockdown.

“Now as we meet the good people of this town we feel stronger. It is a nice feeling that the people you meet while walking along the Grand Canal look in your face, smile and say hello , even though it is obvious that you are a foreigner.”

He said that the local Presbyterian Minister, William Hayes “does his best so I can learn the language.”

He added: “The Marian Hostel staff of Ramona and Mary were very supportive of our adaptation process here. The company is very lucky to have two such good people. If we have some happiness and hope for the future it is thanks to these people.”

The journalist said he and his wife will always remember the young women who played music every Saturday night during the Covid lockdown on O'Moore St.

He said these people and others will feature in a novel he plans to write in the future based on his experiences in Tullamore.

The Turkish native also called on TDs and the Minister for Justice to “urgently introduce a special asylum law for journalists and writers”, whom, he stressed, could contribute to society here.