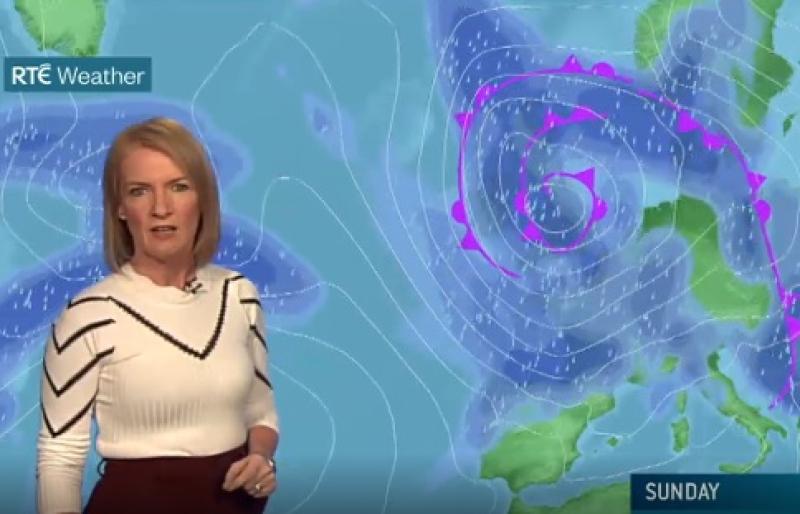 Storm Alex has forced Met Éireann to issue wind in rain warnings for several counties as the weather front steers towards Ireland this weekend bring wind and rain that will last into Monday and beyond.

The forecaster has issued Status Yellow wind and rain warning for counties in the midlands and along west coast.

The forecaster's alert says there will be heavy and persistent rain on Sunday with totals of 25 to 40mm expected. Higher totals are expected over mountainous areas.

The forecaster warns some rivers are at flood risk while surface flooding is also on the cards. The warning is valid from 7am to 11pm on Sunday, October 4. MORE BELOW TWEET

Status Yellow Rainfall warning for tomorrow Sunday has been updated.

Please see below or visit https://t.co/l8JdKfwZt9 for full details pic.twitter.com/A3tul6t9PF

Status Yellow wind warnings are also in force for Donegal, Mayo, Sligo, Galway, Clare and Kerry. The alerts say northwest winds, strengthening on Sunday, will feature average wind speeds of 50 to 65km/h and gusts of 90 to 100km/h.

In her RTÉ weather forecast ahead of the Alex, Met Éireann meteorologist, Joanna Donnelly said the storm would push up from the northeast over Ireland on Saturday and Sunday bringing heavy rain. She said it would linger into the early days of next week leaving unsettled weather over Ireland.

She said the Storm would bring gale-force winds to sea areas and fresh and gusty overland on Sunday.

The storm, which was named by French forecasters, originally swept in from the Atlantic over Spain and France but then moved up over Britain on Saturday. More below tweets.

Here is the latest cloud and rainfall forecast from our HARMONIE weather model. It covers the period from now until 07:00 Monday.

Our Atlantic chart shows precipitation and pressure forecast in 6 hour intervals for the next 7 days:https://t.co/9Giuj4CR5m

The national forecast and the national outlook for the coming days available here:https://t.co/9gKN6SVok4 pic.twitter.com/nu5v6jAzW8

NATIONAL FORECAST issued by Met Éireann at 8.56 am on Saturday, October 3.

SATURDAY Dry in most areas today, with sunny spells, but scattered showers will occur, mainly in Atlantic coastal areas and in the north, turning heavy later in west Munster and west Connacht. A spell of persistent rain will develop in the northeast in the evening or early night. Maximum temperatures 11 to 14 degrees, in mostly moderate northwesterly winds, fresh to strong on eastern coasts.

Rain will extend from the northeast across much of Ulster and the east, with some heavy bursts. Mainly dry elsewhere, but a few scattered showers will occur in the west and southwest, mainly near coasts. Minimum temperatures 5 to 8 degrees. Becoming breezy, with moderate to fresh northwest winds developing, strong in coastal areas.

SUNDAY: Rain will extend westwards to all areas in the morning, persistent and heavy in places, especially in the northwest and midlands, where there is a risk of local flooding. Rain will be patchy in the southwest and will become more intermittent in east and northeast coastal areas, with some dry spells. Maximum temperatures 11 to 14 degrees, in fresh to strong northwesterly winds, with gales on coasts.

There will be further outbreaks of rain in Connacht and Munster on Sunday night. Ulster and Leinster will be mainly dry, but some rain is possible in parts of west Leinster. Patches of mist or fog may develop in the eastern half of the country as northwest winds fall light, but it will be breezy in the west and southwest. Minimum temperatures 7 to 10 degrees.

Monday Mostly cloudy, with scattered outbreaks of showery rain, but dry intervals in many areas also, with a few bright spells. Highest temperatures 12 to 15 degrees, in light to moderate westerly winds, strong for a time on west and southwest coasts.
On Monday night, wither will be some further scattered patches of rain or showers, but otherwise dry, with minimum temperatures of 6 to 9 degrees, in light to moderate westerly or variable breezes.

Tuesday Cool and breezy, with sunny spells and showers, most of the showers in Ulster, Connacht and west Munster, some heavy in the north and northwest. Max. 11 to 13 degrees, in moderate to fresh west to northwest winds, strong along Connacht and west Munster coasts. Further scattered showers on Tuesday night, but clear spells also, especially in the east. Min. 5 to 8 degrees, in a moderate to fresh west to northwest winds.

Wednesday and Thursday: Quite cold, with a mix of bright or sunny spells and showers, the showers most frequent in Ulster, Connacht and west Munster, some of them heavy. Maximum temperatures 9 to 12 degrees. Winds on Wednesday mostly moderate to fresh, west to northwest, but strong on Connacht and Ulster coasts, decreasing mostly moderate westerly on Thursday, except on northern coasts.

Further outlook /Next weekend: Early indications suggest that the weekend will be quite cool, with a few scattered showers on Saturday, but becoming mostly dry on Sunday.