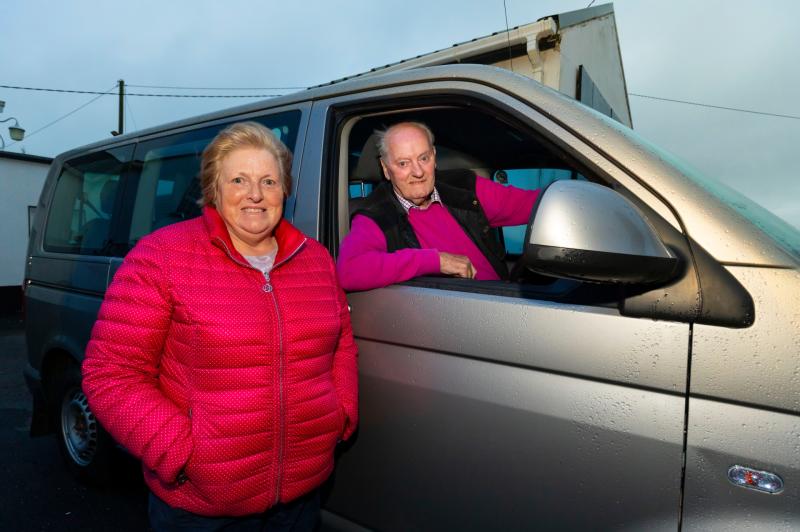 “THE wet pubs are open today and they'll all be ringing us thinking we're still in business”.

So reflected newly retired Kilconfert hackney operator Mary Smyth on Monday last as she and her husband Brendan opened a new chapter in their lives after 25 years in business.

Speaking to the Tribune this week, Mary extended thanks to all their customers over the past quarter of a century whose loyalty ensured the business was highly successful from the outset.

Brendan, who worked as a driver for a number of firms including Kilsaran and Ryan Francis, decided to go out on his own and established the hackney service in 1995.

Ten years ago wife Mary joined the team as a driver when she retired from full-time work with Sherwood Medical in Tullamore.

The business proved a winner from day one as there had been a need for such a service in the largely rural north Offaly area.

Brendan started out with a seven seater car but business proved so good he had to buy a 14 seater bus to cater for the needs of customers.

The Celtic Tiger was beginning to purr and Brendan added to his fleet of vehicles and engaged the services of a number of other drivers.

'We didn't think it was going to be as successful but it really went from strength to strength,” recalled Mary.

She said the duo built up great relationships with regular customers, many of whom they ferried to pubs in Daingean and other towns in the area.

“We seen the smoking ban and the drink driving laws down through the years which were all very hard on people,” added Mary.

Weekend nights were very busy from the start, outlined Mary, who admitted that the couple “never seen bed before five o'cloek on a Sunday morning.”

“It would be breaking day light when we'd be heading home,” she added.

Mary added that Monday was also a busy day with the “Monday Club” patrons in local pubs who relied on the Smyths to ferry them home.

She said the duo built up great relationships with pubs in the area including the Grove, the Mona Bar, Seery's, the Blackthorn, the Gaelic Bar, Castlebarnagh golf club and the hotel in Daingean, Hoppers in Walsh Island, Ballycommon House, Doyle's, Killeen's and Mulvin's in Rhode, Ned's Bar in Ballinagar, the Hazel in Rahugh and the Spinning Wheel, the Castle and the New Forest Hotel in Tyrellspass. She extended thanks to the publicans and their teams for all their co-operation and loyalty in the past.

As well as carrying customers to local pubs, the duo also had a regular clientele of young people whom they brought from the area to night clubs in nearby Tullamore each weekend.

Brendan and Mary also secured a contract for school runs, a service they operated for 18 years, and the couple extended thanks to teachers and principals in schools in their area including Cappagh, Daingean, Walsh Island, Clonaslee, Mountmellick, Rosenallis and Croghan for their co-operation.

They also developed a great rapport with GAA clubs in the area ferrying players and supporters to games in all grades.

Brendan and Mary hadn't intended to retire for another year but the introduction of the Covid-19 lockdown on March 14 last forced their hands.

“Brendan is 74 and I'm 69 and if we picked up that we wouldn't have a chance,” said Mary who added that it was “time to retire.”

But she admitted that she and Brendan will miss the craic with customers though maybe not the late nights and early mornings.