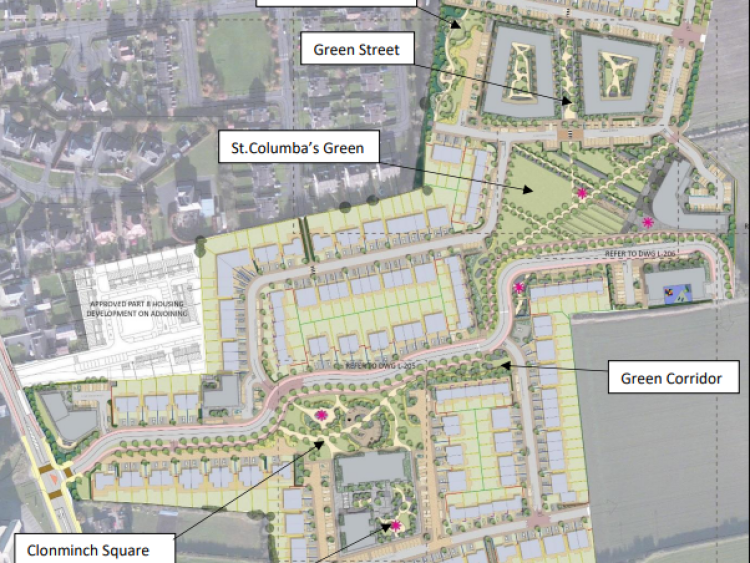 AN Bord Pleanala says it has received over 50 submissions on a proposal by Steinfort Investments to build what it calls a ''new urban neighbourhood'' at Clonminch Tullamore.

The development is composed of 358 dwellings, a neighbourhood centre, parks and a square to be called Clonminch Square at Gayfield and Clonminch, Tullamore.

The proposal comprises of 172 houses, 168 apartments including 22 duplex and 16 maisonette units.

A two-storey neighbourhood centre and employment floor space forms part of the proposal, this building is ''designed to cater for neighbourhood uses like cafes, local shops and a post office or hairdresser at ground floor level.'' The ''floorspace will be adaptable and able to respond to market demands,'' the application states.

The neighbourhood centre will open up onto a ''civic plaza'' and ''St. Columba’s Green,'' one of which would be one of the main public parks in the development.

The creche will be a separate two storey building with outdoor play area and set down parking area.

The application falls under the category of strategic developments which allows plans for large scale housing developments to go straight to An Bord Pleanala, by-passing the local authority

The application says the project is ''set within a parkland setting and adheres to the principles of Urban Design.'' It also states that the design of the roads and ''generous open space areas will create a calm and pleasant environment''.

The proposed buildings on the site will range between 2 – 5 storeys in height and all buildings have provision for photovoltaic/solar panels.

666 car parking spaces, and 249 bicycle spaces will be provided. In addition electric vehicle charging points will be available along with an indoor storage room for bicycles.

There will be public open spaces throughout the development including two large public parks named Clonminch Square and St. Columba's Green in addition to communal open spaces for apartment residents and a tree lined cycle path.''

Play areas are provided at three locations within the development. In total, 17% of the net development area is open space.''

Furthermore, the development provides for work to Clonminch road, including two new bus stops and cycle lanes over a distance of 1,700m from c.100metres south of the new vehicular junction to the application site northwards to c.80metres north of its junction and Bachelors Walk, Tullamore.

The report continues; ''Tullamore is the largest urban settlement in County Offaly, providing for the majority of employment and sustains a large portion of the population of the entire county. The County Core Strategy currently allocates 61% of the County’s population growth up to 2020 to Tullamore. It is submitted that it is reasonable to assume that Tullamore has the capacity for higher than average levels of growth and will be allocated the majority of population growth in the County.''

The net development area site extends to 10.8 hectares and consists of agricultural fields and associated field boundaries with an existing agricultural entrance onto Clonminch Road (R443).

The site is zoned 'residential' and 'neighbourhood centre'. The application contains a statement setting out how the proposal is consistent with the objectives of the Tullamore Town and Environs development plan 2010-2016 and Offaly County Development Plan 2014-2020.

However, in the new draft Offaly county development plan, areas more than 2km from the town centre are considered to be in the long term strategic reserve area and should only be be utilised when all of the other designated areas have been fully developed.

Architect and town planner Fergal McCabe has already commented in this paper that if An Bord Pleanala gives the development permission it ''will undermine the housing strategy of the Draft Plan by providing 24% of all new housing anticipated for the next six years on a single edge site and equivalent to almost the entire amount of housing intended for the town centre.''

Independent Councillor, Sean O' Brien, has outlined his objection to the development in a statement to the Tribune.

"This development of 358 housing units, with the potential for even many more, will have a major impact on existing residents in Clonminch and Clonminch Woods particularly. The fact that there is a proposed entry and exit through Clonminch Woods will cause serious traffic congestion and it will also be a danger to residents and especially children. It is very unfair to impose this on a settled estate which is very well maintained by the residents" outlined Cllr O' Brien.

"There are also difficulties with the Tullamore Wastewater Treatment Plant. This plant has existing capacity difficulties and is under severe pressure after heavy rainfall. A major investment is required for the Tullamore Plant and thus I feel it is premature to grant planning permission for such a major development pending the expansion of capacity at the Tullamore Wastewater Treatment plant; this work would have to be done by Irish Water and thus we do not have control over the timing of this work. Planning permission has already been granted for a housing development of single story houses to the rear of Limefield for elderly and people with disabilities. This proposed development with some 5 story blocks will have a major impact on the smaller development and also on all existing developments in Clonminch.

The Council's Chief Executive will be sending an opinion on this development to An Bord Pleanala in the coming weeks and I would ask that the opinions of the Clonminch residents and the Councillors be included in that report" concluded Cllr O' Brien.