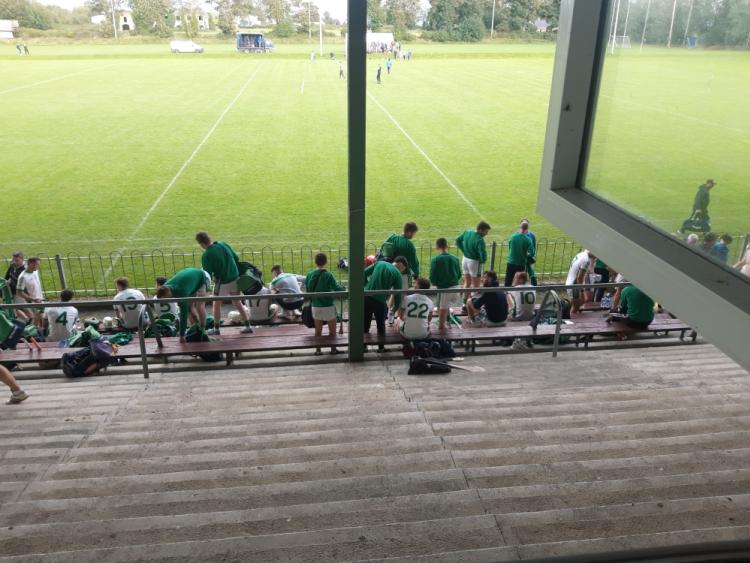 BIRR were extremely impressive as they booked their place in the semi-finals of the Offaly Senior Hurling Championship with a surprisingly comfortable win over old rivals Coolderry in Banagher this evening.

The manner in which Birr took control of the game with the wind on their back in the frst half and then ruthlessly killed off their opponents in the second half was the hallmark of a very good side.

It really was a consummate display by Birr, close to the perfect performance, even if there are far stiffer tests ahead. Having suffered a devastating late defeat to St Rynagh's in the county final last year, Birr are clearly a very well focussed and drilled side.

They were just excellent here and while the standard of opposition by Coolderry was well below what we expected, there was a huge amount to enthuse about the way the winners played.

For Coolderry, this was a game too far for them. With a number of players now in the end game of their careers, they have been a great force and tremendous battlers for severral years but this was not one of those occasions. It will be interesting to see if players such as Kevin Brady and Brian Carroll come back for more. Brady started at centre half back but was part of a Coolderry defence that was ripped apart by a flying Birr attack,.

The fallout from this game may be long and hard for Coolderry as Brian Carroll appeared to storm off the field after a clash with one of his own team mates near the end. The veteran star went over to the sideline, gathered his belongings and headed for the exit with sub Martin Connolly coming on for him a few seconds later as the Coolderry sideline realised what was happening.

It would be a great shame if this was the final hurrah for Carroll, who has contributed so much to Offaly and Coolderry hurling over so many years. Carroll had begun to open up in the second half, was one of Coolderry's better players on the day and it added another very bleak dimension to a very black Coolderry day.

The wind had a huge bearing on this game and it bore down on the Coolderry goal in the first half. It took Birr a while to get into full stride but once they did, they looked good and a 2-10 to 0-3 half time lead represented a very good thirty minutes work.

Birr hit the ground running and had four points on the board in the opening three minutes. Points from Brian Carroll (free) and David Tooher left Coolderry trailing by 0-5 to 0-2 after thirteen minutes but their prospects nose dived spectacularly after this.

Barry Harding drove home a 14th minute goal after a Niall Lyons pass and Birr began to motor with Coolderry's cause not helped by a couple of poor wides. Still a 1-7 to 0-2 deficit was by no means a disaster as the half drifted into the closing five minutes. However, Birr took a huge step forward as a brilliant Niall Lyons goal when he raced into open space and drove home a powerrful shot in the 26th minute really put them in the driving seat.

With the wind to come you couldn't rule Coolderry out but a thirteen point Birr lead left them with an awful lot to do.

And that mountain turned into a real mission impossible within moments of the restart. Niall Lyons got another super goal in the 32nd minute, showing great intuition to find the space to tight home and Eoghan Cahill's free made it 3-12 to 0-3. There was just no way Coolderry could haul in that deficit and Birr continued to snuff the life out of their opponents.

Coolderry did dig deep and fight hard, even if it was mainly for their pride. Brian Carroll began to find space and tapped over a couple of points from play but Birr showed their quality by never letting them get a sniff of a chance. After Coolderry got five without reply, Birr killed them off with the next five and the closing ten minutes were only of academic interest.

Birr outplayed their opponents in every sector, working so hard but also injecting real pace into their game and taking on their man at every opportunity. They just had too much pace and energy for Coolderry and they had players at the top of their game all over the field.

Two of their most experienced players, Stephen Lonergan and Michael Verney returned to the starting lineup here and both really strengthened their hand. Verney was super on the half back line, covering well and using the ball very intelligently while Lonergan led the attack brilliantly from centre half back.

Veteran goalkeeper Brian Mullins, Oisin Murphy, Rory Carty, the superb Brendan Murphy, Eoghan Cahill, Morgan Watkins and Niall Lyons all excelled for Birr but really, this was one of those rare days where every player did well.

And in a sad sort of way, that says as much about Coolderry as it does about the winners but no one should be too hard on a group of players who have contributed so much. If their day is gone and they are beaten by a better side, so be it but there were not many straws for the losers to grasp at here.

See Midland and Tullamore Tribune on Wednesday for full report and match analysis.