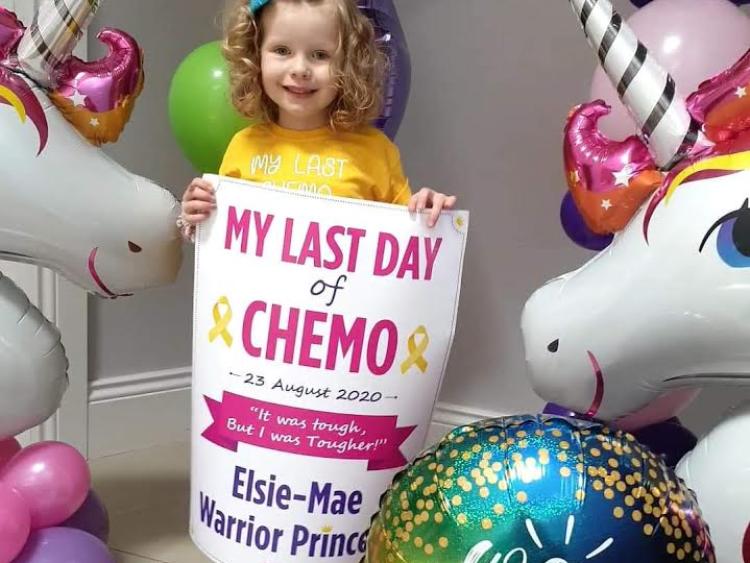 EVERYONE is in need of some good news at this particular time, and what could be better than the recovery of one very brave little girl after enduring months of sickness and gruelling cancer therapy.

Last Sunday, August 23 was a day of celebration for Elsie Mae Scally, from Kilclonfert, as it was the day she received her final chemotherapy treatment having enduring months and months of treatment.

Her mother Richella has christened her the warrior princess and it's hard to argue with that description.

The nightmare began for Elsie Mae and her family at the end of February 2018 when she first became seriously ill and needed a blood transfusion. However, she recovered and was sent home from hospital. But relief turned to agony for parents David and Richella when a month later on April 11, 2018 she was diagnosed with Acute Lymphatic Leukemia [ALL].

She was admitted the next day to Our Lady's hospital Crumlin. This was the start of a 28 month battle with cancer. Elsie Mae was just two years old at the time. The youngest of three children with an older brother Joseph (10) and sister Molly (12).

''Elsie Mae initially didn't respond to chemo treatment and failed the induction treatment,'' said Richella. ''So she was moved to high risk and her chemo changed and increased. On her third birthday July 4, 2018, we were devastated because at that point her future was so uncertain and we were struggling to stay positive,'' explained Richella.

But fighter that she is, by September 18, Elsie Mae was starting to respond to the new regime. Life was still a harrowing ordeal of constant and often daily hospital trips to and from Crumlin for her chemo.

Sometimes when she returned home she had to be admitted to Mullingar hospital as her temperature rose or there were fears of an infection.

At the start of her treatment Elsie Mae had a Hickman line surgically inserted directly into her heart. Also know as a Freddie this is how she received all her chemo, bloods or platelet/blood transfusions etc.

''In the first year of treatment Elsie had over 21 general anaesthetics and lumbar punctures, also a number of bone marrow aspirated and biopsies.

Her experience at the start was very traumatic and she was unbelievably scared and hated to see the nurses in blue uniforms coming into the room. But with the help of play therapy in hospital she overcame this initial trauma. She was a brilliant patient always smiling and making the nurses laugh, she made friends easily and has loads of oncology friends. Sadly some have passed away, most recently the beautiful Sophie Walsh who was laid to rest last week. Both girls were exactly the same age and loved 'Frozen' [the film] so Sophie's passing has left a void with our family this week. We will carry her and all the other special angel's we met with us and celebrate them with every special moment Elsie has,'' added Richella.

Elsie Mae herself has missed out on so many special occasions because she was constantly neutropenic and advised to self isolate, a term so many of us are familiar with now. But this has been the norm for the Scally family for the last 28 months.

''She missed so many special days like the opportunity to be a flower girl at her Uncle Rory O'Reillys wedding to name one,'' said Richella.

Treatment for ALL is in 5 phases and 1 to 4 is very gruelling with so much in-patient stays. But round 5 is called maintenance which is mainly delivered at home by the parents.

''My husband David had to be trained to take Elsie's bloods via the Freddie line and how to care for and dress the site. This saved Elsie well over 90 trips to Mullingar hospital. Crumlin would call us each Tuesday to advise what level of chemo she needed that week based on bloods. Once a month we would visit Crumlin for a full check up and infusion of chemo.''

Elsie Mae suffered severe side-effects from the chemotherapy and she was very very ill. She needed daily anti-sickness medication to combat the effects.

''We wont know the long term effects of the chemo, but that's a worry for another time. It was very difficult to give her chemo at home. I found this very difficult especially when you read the labels and the side effects,'' recalled Richella.

It was on their last visit to Crumlin that Elsie Mae's consultant gave them the wonderful news, that Elsie was to finish her treatment on August 24 with her final chemo delivered on August 23.

''Amazing news in these crazy times. She will still need a future operation to remove her Hickman line in a few weeks and will need to take oral antibiotics and antiviral meds for three months, but hopefully that will be the end of Elsie's cancer journey. It was the worst of times but also the best of times. We the Scally family will never be the same as pre-cancer, but maybe we are better, wiser, and definitely older. We are still very nervous of Elsie's future. There is only a small chance of a relapse and she will be monitored by Crumlin for the next 5 years. By the time she starts secondary school we hope this will be a distant memory. She is due to start Junior Infants in St Colemans NS Cappagh next week with the consultant's blessing. We weren't expecting that bit of good news. We are still apprehensive due to Covid but there is something wonderful about being normal again,'' Richella added.

''Due to Covid restrictions put in place this week we were unable to go ahead with a family party, so we looked to the community and found a different way to celebrate her end of treatment party, by asking motorists to toot their horns passing the house. We had an amazing turnout yesterday [Sunday August 24,] and a massive community turn out in cars led proudly by Kilclonfert GAA club. We posted this on Facebook and it went a bit viral. We have received messages from all over the world of people tooting their horns to celebrate Elsie Mae's battle with cancer coming to a close.''

''Early on in Elsie's treatment our family set up TeamScallywag to help support Elsie on this journey and she was renamed Warrior Princess a name that definitely fits our fiery feisty fabulous Warrior. It was tough but she was tougher. We would really like to thank our older children Molly and Joseph who sacrificed so much for their sister. Our amazing family, the Scally's from Kilclonfert and The O'Reilly's in Clara, our friends, TeamScallywag the community of Kilclonfert, Clara and Tullamore who got behind us from the start. All the people who came out in support or sent cards, prayed or even held Elsie in their hearts thank you. But a massive, massive word of thanks to the team of nurses, doctors, laboratory technicians, medical staff,cleaners etc in Mullingar and Crumlin hospitals and Kilbeggan Medical Centre. Without your care Elsie Mae would not be here today,'' concludes a happy Richella.