Offaly man back on track after bank battle 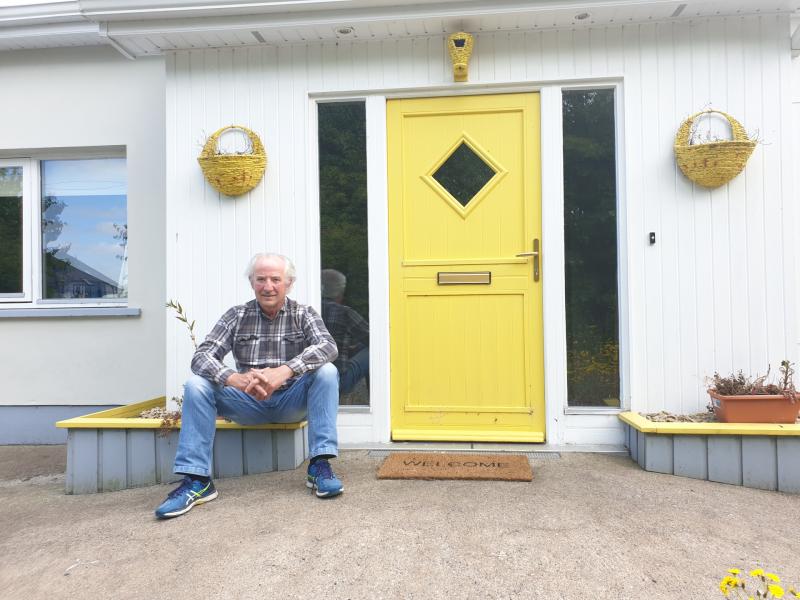 Tom Roche pictured at his home near Rhode

AN Offaly man has revealed he once considered jumping off a bridge as the pressure of mortgage arrears and unemployment took its toll.

Tom Roche, 70, has urged people in difficulty to contact the Money Advice & Budgeting Service (MABS) because with their help he is now on the verge of securing his future in his own home through the mortgage-to-rent scheme.

A native of Tullamore, Mr Roche bought a half-acre site near Rhode with over €70,000 in savings in 2001 and then received loan approval from Permanent TSB for a €150,000 15-year mortgage to build his house.

At the time, he was on a “very good” salary with the non-governmental organisation he founded, Just Forests.

An education and lobbying group for environmental causes, with a focus on sustainable forestry, Just Forests was receiving funding from the Department of the Environment and Concern.

“I got mortgage approval straight away,” said Mr Roche. He went ahead and built a 1,200 square feet two-bedroom bungalow, plus a detached workshop for his carpentry and furniture restoration business.

“Everything was good for a while, I paid [the bank] back €72,000 over the next eight or nine years. Never once did they have to pick up the phone looking for the mortgage, it was there every month on the day.”

The recession of the late 2000s spelled the end of the Government grant for Just Forests. “When the crisis came NGOs like Just Forests were the first ones cut, the first to be wiped off the payroll,” said Mr Roche.

“I knew what was happening and I was straight into TSB in Tullamore. I didn't delay one minute and I said I have lost my job, I have no livelihood coming in and I'm going in to sign on social welfare.”

He made an effort to keep up some repayments but soon found it almost impossible. Meanwhile, the bank began to contact him constantly.

“The letters were coming and the phone calls were almost daily... I started to ignore them because I couldn't deal with them.”

He was advised to contact a personal insolvency practitioner and because he entered that process, he was given some breathing space.

However, partly because of an issue with a previous property which was unresolved at the time, an insolvency arrangement never came to fruition.

The pressure from the bank, plus his continuing unemployment, was affecting him severely.

“There was times I thought of jumping off Rhode bridge,” he said.

His lucky break came when he got a part-time job in Killarney working in the National Park through the Coillte Compass Club and he moved to Kerry for a couple of years.

He worked in outdoor education for children aged between six and 12, worked with Killarney Mountain Meitheal on the removal of rhododendron, supported Killarney Looking Good, Killarney Tidy Towns and Killarney Chamber of Commerce and Tourism and was named as the 2016 Volunteer of the Year in Killarney.

He also organised the Killarney Celebration of Trees where over 2,000 people “hugged 2,000 trees”.

“I had been working since I was 13 years of age when I left school. I emigrated to Australia at 18, I never had my hand out in my life until the financial crisis hit. I was always well able to fund myself.”

Through personal insolvency negotiations the balance sought was lowered to between €70,000 and €80,000 but an arrangement was never agreed and his application was dismissed in the Personal Insolvency Court.

Mr Roche, who is divorced, contacted the MABS office in Mullingar and immediately felt he was on the right track.

“I am just so sorry I didn't go there 10 years earlier. They were just superb. Not only did they put my mind at ease but they just took on the whole thing and did all the spadework for me for the mortgage-to-rent.”

To avail of the mortgage-to-rent scheme, Mr Roche went on the Offaly County Council social housing list and negotiated an agreement between his bank and iCare, an approved housing body set up by the Irish Mortgage Holders Organisation.

As a retired single man (who still works part-time) living in a two-bedroom house he met the criteria for social housing and last year was told he qualified for the mortgage-to-rent.

Final approval is due soon and though going into the scheme will mean he no longer owns the house he built, Mr Roche has no regrets.

“I'll have a manageable rent and I'll relinquish ownership of the house but I can't take it with me, I've no one to leave it to. I just want to be left here in peace for the rest of my life.”

He says mortgage-to-rent is preferable for all sides than “kicking me out” and having to be provided with other accommodation.

“I was doing my work, getting paid sufficiently and all of a sudden the rug was pulled from under my feet and my whole life was turned upside down.”

“I would recommend MABS 100% if everything else fails. Maybe I should have gone to MABS first, but the fact that MABS knew I went through the personal insolvency service they knew I was making a huge effort to address it with my own resources so I think that stood to me when I went to MABS.