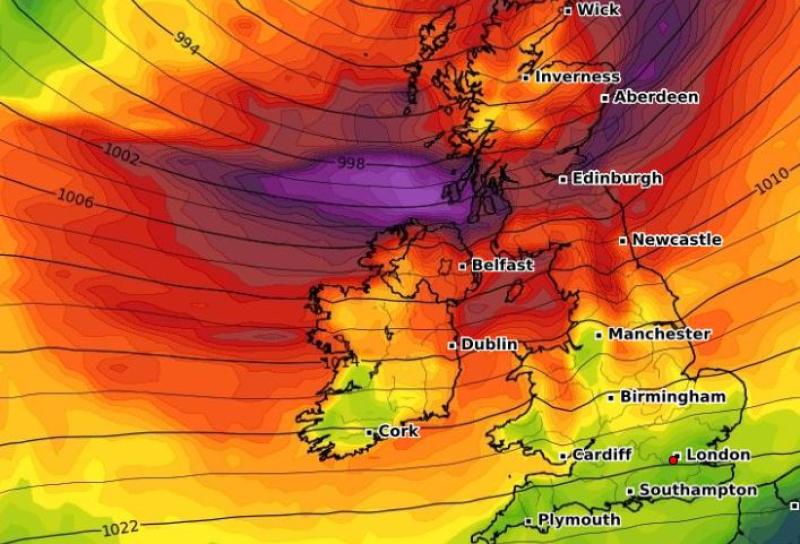 The weather forecast for Ireland for the coming weekend from Met Eireann is for it to be wet and windy for places on Saturday with the weather improving on Sunday.

The weather forecast for Saturday for Ireland from Met Eireann is for blustery or windy day. It will be mostly cloudy over the northern half of the country with spells of showery rain. Brighter further south with sunshine and showers. Highest temperatures of 12 to 16 degrees with fresh, gusty westerly winds, which will be strong to gale force in the northwest.

On Saturday night, outbreaks of rain will continue in Ulster and north Connacht and will eventually clear by morning. The rest of the country will be mainly dry with a fair amount of cloud and some clear spells. Lowest temperatures of 7 to 9 degrees with fresh, gusty westerly winds, gradually moderating.

The weather forecast for Sunday for Ireland from Met Eireann is for it be mainly dry apart from perhaps one or two showers in the north and northwest. The best of the sunshine will be over the southern half of the country. there'll be a bit more cloud further north. Highest temperatures ranging from 15 degrees in the west to 20 degrees in the east with moderate southwest breezes.

A nationwide forecast and outlook covering the next week can be found here. https://t.co/9gKN6SVok4 pic.twitter.com/j9ZxDyyWh8

Monday morning will be dry in most areas with sunny spells. However, rain and drizzle will develop in the west by noon and then move slowly eastwards across the country and lingering over Leinster and Munster on Monday night. Rainfall amounts will be small. Highest temperatures of 14 degrees in the west to 20 degrees in the east with moderate southerly breezes.