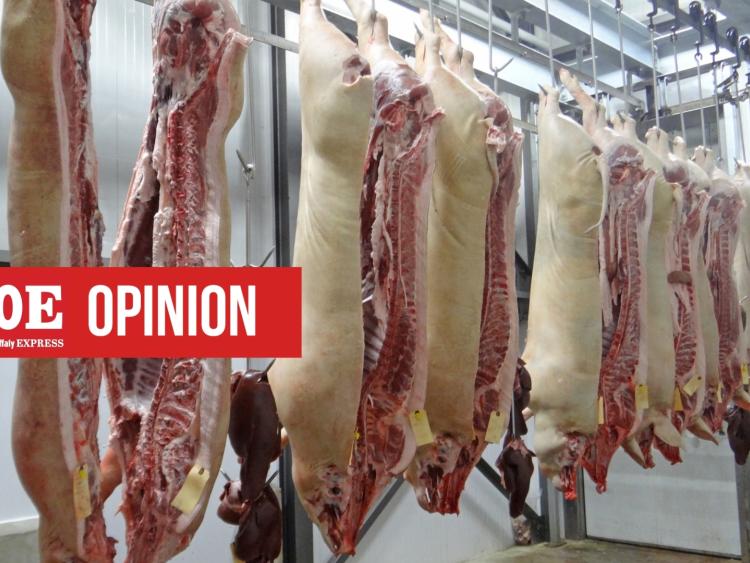 OPINION: Meat factory workers treated like the dregs of the frontline

While the country has rightly applauded doctors, nurses, carers and other essential workers during the current Covid-19 crisis, one sector appears to have been treated with other contempt.

Clusters of the virus have been identified and tackled in nursing and care homes, hospitals and direct provision centres, but it would seem some meat factories were allowed to be overrun with coronavirus before any action was taken - and the action has been paltry in comparison.

Testing has been carried out at factories across the country, including here in Offaly this week, more than two months after Ireland's first case was diagnosed. Since then, the word 'lockdown' has entered common parlance; swathes of the economy have been shuttered, people that can are working from home, others are cocooning and avoiding public outings.

All the while, at dawn each day, thousands of often low-paid workers have been soldiering through the gates and onto boning, cutting and packaging lines at meat factories, quite often in roles where social distancing is but an ideal printed on an obligatory notice on the wall - impossible in reality. A slowing of production to alleviate such concerns did little to stem the spread of the virus. Over 600 cases have now been diagnosed in meat processing and packaging factories across Ireland.

We were contacted in the Offaly Express by local workers expressing fears in the workplace about the issues around being unable to social distance, inadequate hygiene measures and of potentially losing their jobs if they rang in sick. We heard anecdotal evidence of workers taking paracetamol on their way to work in order to effectively beat the thermometer and mask any temperature they might have - one of the key symptoms of coronavirus.

This was back in March and April, and yet the sector carried on, and carries on still, even after the testing campaign. Food production is essential but when it is carried out at the expense of workers' health, that fact is questionable at the very least. Is the right to produce food an absolute one for factories? It would appear so. In fairness, there were exceptions and not all factories carried on regardless. Dawn Meats in Kilbeggan took the decision to close temporarily when they had just four cases of the virus.

More than ten clusters of cases have now been identified in meat factories elsewhere and yet so few of them have closed, even temporarily. Workers were tested but, while they waited for their results, they headed back for factory floors. The 'business as usual' and 'at all costs' approaches here would appear completely at odds with the advice of Chief Medical Officer Tony Holohan. It is for this very reason schools, pubs, building sites and most shops were closed down - public health comes first.

That hasn't filtered through to some factories and that is a stain on the HSE, HSA, Department of Health and government response to the crisis. The Offaly Express has continually asked the Department and individual companies to outline their safety practices with regard to these workplaces. We were ignored for weeks before receiving some PR speak by way of response and even that only came after Brian Stanley TD raised the issue of factories in the Dail.

That set the issue at the top of the political agenda - at least for a while. Lots of 'we're aware of and are tackling the issue' statements have been made by important-looking people and yet, the soldiers of the dawn still truck it into work, some in highly unsatisfactory conditions - borne out by the sheer number of positive tests in that setting. A percentage of these cases can be explained away by the living conditions of some of the workers - many of whom have come from abroad and live in groups together, but that only tells half the story.

I'm not suggesting every meat factory in the country should have been shut down. Shelves need to be stocked and the last thing the country needed was a fear of food running low. The irrational panic-buying of toilet roll was enough to be dealing with.

Nonetheless, many meat factory workers have been treated like the dregs of the frontline. With scores of workers now in isolation, what have some factories been doing? Posting online ads looking to hire people for less than €11 an hour. Is it any wonder existing workers were afraid to ring in sick if they had symptoms in the beginning? That is perhaps the reason so many cases have ripped through such factories. A similar situation has arisen at factories in the US and Germany and beyond.

In an economy in such a state of flux, workers in all sectors are worried about their job security. Tenure in these factory settings appears to be more fragile than most sectors. The workforce would appear to be utterly dispensable. As a cohort, many would appear to have been treated with contempt. Other workplaces with high rates of interaction have avoided clusters of cases - take supermarkets and distribution centres, including mail centres, as examples.

Why have some meat factories had such a high rate of cases? Maybe workers perceived as low-skilled are not as important when it comes to health and safety. If that's not the case, I'd like to see someone in a position of power show us rather than tell us.

Talk is cheap, but a lack of substance could come with the highest of costs.