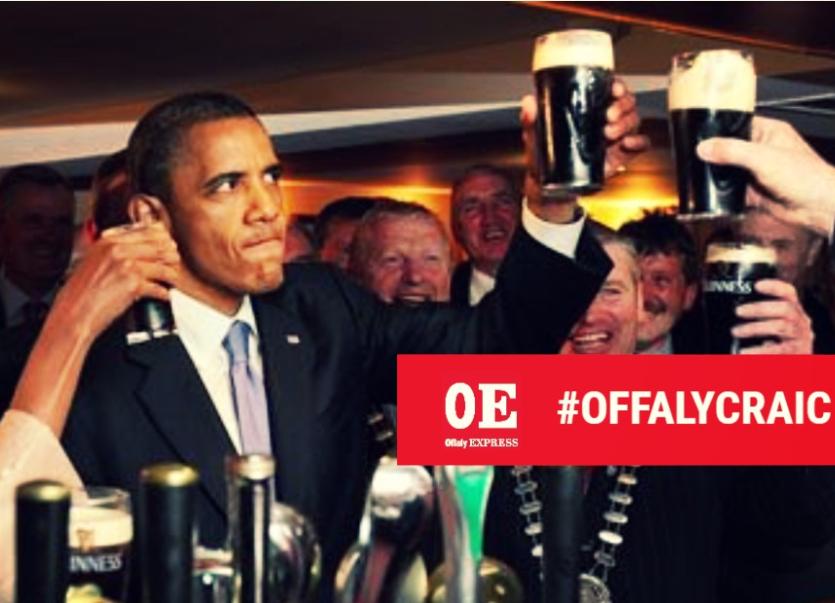 With their current Donald Trump situation, Barack Obama is sadly missed in America, but he's probably missed even more down in Ollie Hayes' pub in Moneygall. The stories of his visit grow legs every time we hear them. Some say he lowered sixteen pints, gave a rousing rendition of the Offaly Rover, lined out for Moneygall GAA's Junior B hurlers in a challenge match and built the Supermacs restaurant named in his honour with his pair hands - but we're only speculating. Nevertheless, the fact that Barack Obama's great-great-great-grandfather, Falmouth Kearney, hailed from Offaly means we're claiming him, and if he was any good in that Junior B match, we'll have him on the Offaly hurling team as well. Kearney emigrated to New York in 1850 before settling in Indiana. As for that Donald Trump lad, we hear he has Clare connections. Aren't we glad now we cut ties with that lot back in 1998!?

As a completely unbiased and fair-minded media publication, we declare that Tullamore sausages are the finest in the country. Clonakilty - come at us, bro! We're having none of your guff. Back in the days of the recession, Offaly people emigrated to the far-flung corners of the earth, and wherever they went, Tullamore sausages followed. This was probably illegal in some cases but somehow mammies up and down the county got consignments of Tullamore sausages to their starving children in Australia, America and beyond. They'd have made sausage sandwiches if the Brennan's Bread had only survived the journey!

This is a curveball but we are actually not joking. This goes back to the story of Cornelius Heeney, an Edenderry man who emigrated penniless to New York in the late 1700s. He became a hugely successful businessman and owned vast amounts of land around the modern-day Fifth Avenue area of New York, a very lucrative address and popular tourist area. Rather than make commercial gains from the land, however, the Edenderry man gifted a portion of it to the building of St. Patrick’s Cathedral, one of the most recognisable Catholic cathedrals in the world. After that, he contributed numerous gifts of money to St. Patrick's and sold other parcels of land in the Manhattan area. You can read Cornelius Heeney's full story below - and we promise you - it's amazing.

"July please, I'm on my knees, the smell of your fresh cut grass, your blue sky grins for all its sins, look another gorgeous Levi ass." Nothing quite heralds the summer in Ireland like the song 'July' by Offaly's finest, Mundy. It is now an Irish summer anthem. With more than 800,000 views on this video alone on YouTube, it's fair to say good ole Mundy is a national treasure, not least because of this tune. Someone pass us a pint of Bulmers!!

It's a little known fact that John Joly, the renowned physicist, was from Bracknagh. Joly is famed in the medical profession for his development of radiotherapy for the treatment of cancer in the early 1900s. Although there is no cure for cancer, radiotherapy is important in treatment terms as it can control and kill malignant cells in the body. Shortly after Marie and Pierre Curie discovered radioactivity and radium, people started exploring the medical uses and Joly came up with the 'Dublin Method,' a move that made the previously expensive radium treatments in cancer realistic. He later received awards from the Royal Dublin Society and the Royal Society of London. It is truly amazing that a young scientist from Offaly was so instrumental in developing such treatments. The Bracknagh native's legacy is truly a great one.