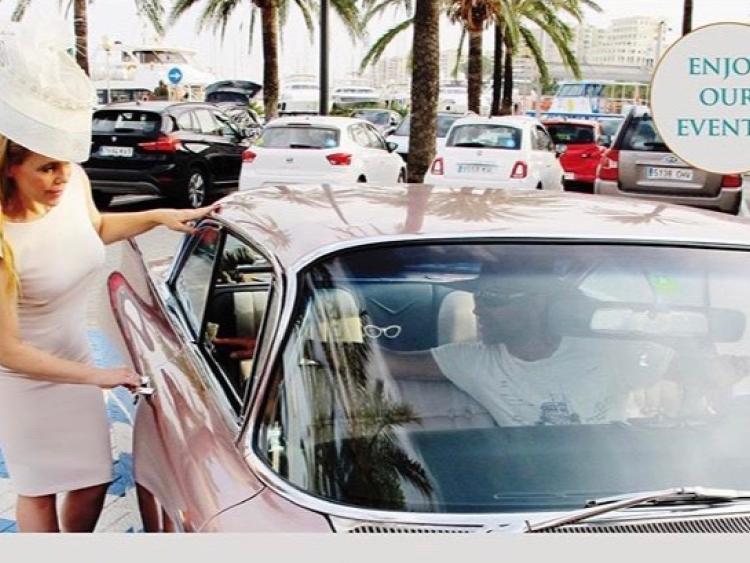 Hats off! Offaly milliner to feature in prestigious Spanish publication

Creations by Offaly milliner Denise Casey have turned the international spotlight back on the Ballycumber woman, with her work recently taking pride of place in connection to two of Europe's most prestigious events on the fashion calendar.

One of Denise's pieces, her piece that was actually a part of last year's event as it happens, has been chosen to feature on the cover of the PALMA SPANISH HAT WEEK brochure for 2020, which is due to take place in October of this year. And not only that, but in that cover photo Denise's hat is modeled by Countess Judith Kinsky, the curator of Palma Hat week herself.

In a further development that truly signals Denise's rise to prominence on the international scene over the last year or so, yet another of her creations was recently selected for participation in the revered catwalk show of Lonon Hat Week's press preview.

Speaking about both last weekend, Denise was, as ever, humbled but taking it all in her stride: "Well firstly, I was delighted to have my hat from last year's Palma Spanish Hat week chosen for the front page of their official brochure for this years exhibition. That's such a huge honour, and I'm very grateful that an opportunity like that has come my way.

"It's definitely a very proud moment for me. And even more so given that the hat was actually modeled and worn in the photo by Countess Judith Kinsky, who is the curator of Palma Hat week. And I believe the Countess has said it's one of her favourite ever photographs, too. And something like that, as you can imagine, is just so lovely to hear."

Palma Hat Week is scheduled to take place between October 19-25, which could make it quite the busy month for the Offaly woman. London Hat Week, originally planned to happen between the 16th and 24th of this month, has been postponed due to the current health emergency surrounding Covid-19, and is now rescheduled for October as well. All being well in the world, Denise is planning on being there to see one of the newest additions to her body of work - 'An Todhchaí' - take its place before the eyes of the fashion world.

And, with that piece having been among only forty chosen to feature in the prestigious Catwalk Show for the event's press-preview last month, it's certain to garner huge attention from media, industry, and fans alike.

"Unfortunately that press-preview took place on March 16, which was just as the Covid-19 restrictions had come in here in Ireland," recalled Denise, "and before restrictions took hold in England. I had hoped to travel to the show, of course, but instead when the time came I just felt it was best to heed Irish health warnings, so I decided to stay at home."

The press-preview, which took place at the five-star Shangri-La Hotel at the iconic central London landmark, The Shard, was largely attended by journalists from all over the world, including editors from various fashion magazines, as well as a large number of fashion bloggers and high profile influencers.  Such press events are planned to provide an insight into what can be expected for the actual exhibition. London Hat Week traditionally attracts thousands of visitors.

"I would have loved to be there," continued Denise, as she began to tell us about her featured piece, "but look, under the circumstances this year, staying at home was the right call, I think. But what actually happened for the press-preview is that XTerrace Fashion chose forty of the best hats and headpieces from 360 qualified International entries - there were hundreds of overall entries - into their Hat week Exhibition.

"And I was absolutely thrilled to have been one of that chosen top forty to be included in their prestigious catwalk show. The theme for this year's Exhibition was to be 'To the Future and Back', with milliners like myself from all around the world invited to create their own take on the title, your choice being either futuristic based or vintage."

Denise decided to choose future. And, after what she described as "considerable thought," she came up with her design called 'An Todhchaí' -  the Irish meaning for 'the Future'.

"My concept was, perhaps somewhat ironically in these times we now find ourselves, that in order to look to the future we must first 'think outside the box.' My piece is made up of wire sculpture shaped to represent an 'Eye', but when you look through it, the pupil is in the shape of a box. It's covered in a sequin style fabric and iridescent satin, and the eyelash effect is made from goose quills."

Anyone asked to name some of the world's most influential fashion hot-spots will invariably list off cities like London, Paris, Milan, and New York in a heartbeat. It's fair to say that Offaly is less likely to roll off anyone's tongue in this regard. Well, up to now, that is. Because it's also fair to say that Denise, with her magical and magnificent millinery,  is well on her way to changing all that.