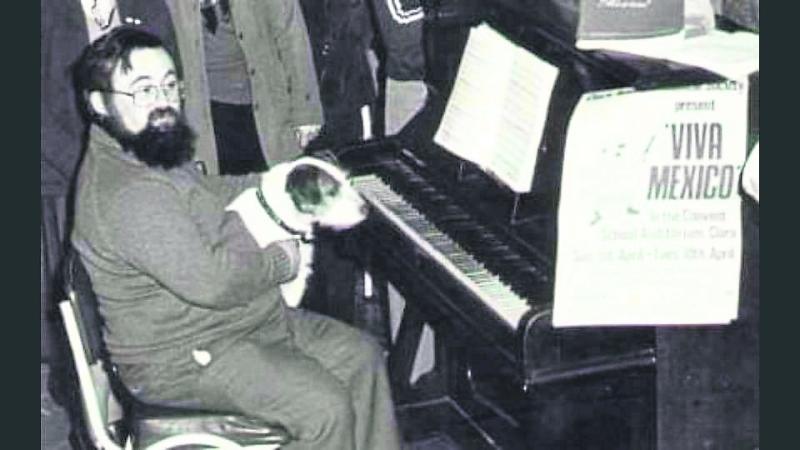 The late Sean Gilligan filled the role of Musical Director of Tullamore Musical Society for many years.

TRIBUTES have been paid to the late John [Sean] Gilligan, a leading figure in musical and community circles in Tullamore who passed away last week.

Sean, Arden Vale, made a huge contribution to life in Tullamore through his involvement with a host of local organisations and his musical talent. He passed away peacefully at Tullamore hospital and his Funeral Mass was celebrated on Friday last, April 3 in the Church of the Assumption, Tullamore.

Due to the Covid-19 restrictions, attendance at the Mass was limited to family only but it was viewed by many on the parish webcam.

In a tribute this week, Tullamore Musical Society said members were deeply saddened to hear of the passing of their former musical director.

For years, Sean brought his expertise to the orchestra pit, whether as a director, musician or conductor. He was not only prolific in Tullamore Musical Society but in societies all over the midlands, a tradition his son Ciarán has carried on. He could turn his hand to almost any instrument, but his first love was the trumpet. He was not only monumental in musical societies, but he shared his gifts throughout the midlands with many organisations.

Sean’s own words best sum up his experience in musical societies. In Tullamore Musical Society's book celebrating fifty years, he wrote the following:  “They come the day before the opening night, assemble in the midst of people rushing around, amid tying painted props, staled chairs, lighting cables and worst of all, in cold draughts that affect you in places you did not think were exposed. Cases are opened, instruments lovingly assembled, chairs pulled around and then - ‘the band plays on!’ It is the orchestra rehearsal. Curtains rise and curtains fall. Then, in a week or less, they disappear, not to be seen again in ensemble until the next year. And that’s provided they survive the critic’s review, the Chairman’s review, the Treasurer’s review, the reviews of the leading (man, woman, or committee) member, and provided that the committee agree that they should get the same players as last year. Even then, it may be a case of ‘but do you need every one of them?’ Such is the rise and decline of the musical society ‘orchestra’.”

The Society extended its condolences to his family and friends at this very difficult time and said members looked forward to celebrating the life of a truly remarkable man.

“Sean made an enormous contribution to the community in Tullamore and Offaly.    He was a founding member of the current St. Patrick's Day Parade Committee when it met in the Bridge House, Tullamore in 1983,” said Cllr O'Brien.

He added: “From small beginnings the parade has prospered over the years and is now one of the leading parades in the Midlands. Of course the Tullamore Town Band, with which Sean had a very close association, was a star attraction in the parade over many years. Over later years Sean sounded the bugle to announce the start of the parade at the reviewing stand, working closely with the late Seamus O' Connor who was MC for the Parade for many years.    The late Kevin O' Toole and Syl Shelley were also part of that original Committee, together with the current Chairman and Secretary, Johnny O' Connor and Sean O' Brien.”

“Sean was a great committee member in those early days as he was very keen to see a St. Patrick's Day Parade in Tullamore.    He was very good humoured  and supported the establishment of the Parade in every way he could.    He kept in contact with the committee over the years and was always willing to help in any way he could when we contacted him.
“Our community has seen the passing of a person who contributed greatly and we would like to offer our sincere condolences to his family and to thank Sean through them for his great contribution to our Committee,” added Cllr O'Brien.