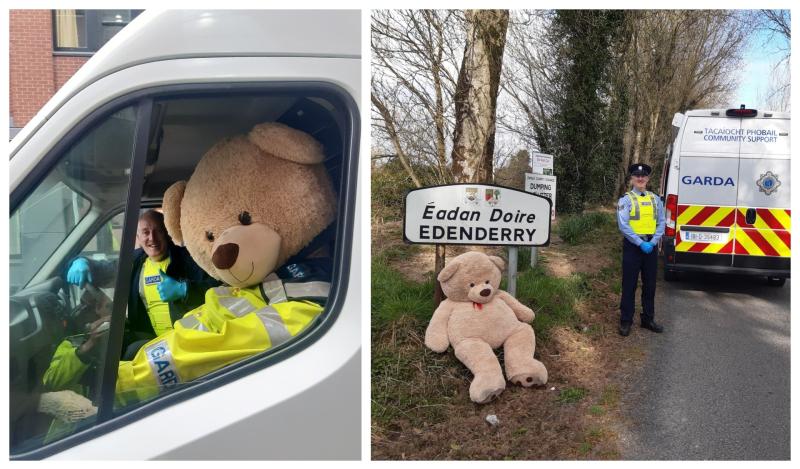 An Offaly teddy bear has become a viral hit this week after becoming a member of An Garda Síochana and travelling the country.

Ted, the mascot for the online activist group Ma's On A Mission and their toy appeal, had been missing for many months before he was discovered by gardaí in Dublin.

Gardaí featured him on their social media channels all week as he helped with the frontline response to Covid-19, keeping up spirits and even donning the garda uniform on his travels.

He has now been featured in the national media and won fans all over the world.

It was soon discovered that this mysterious bear was indeed Ted and gardaí returned him to Edenderry to Ma's On A Mission leader Suzanne Burke.

Suzanne said: "I want to say a massive thank you to Garda Damien and his colleagues who picked Ted up and got him home safe to me. The guards are not only keeping us all safe from crime but they have also been doing people's shopping, even walking dogs and of course, bringing home missing teddies.

"I'm so proud of our frontline workers and all they do. In times of hardship they are still taking time out to put smiles on people's faces and Ted has certainly done that too.

"Damien was reluctant to say goodbye but Ted has so much more work to do so, unfortunately, his time with the guards in Store Street Garda Station must come to an end.

"But Ted had a ball, not only did he raise a serious amount of toys for kiddies at Christmas, he was also assisting the guards and bringing joy to those who need it through such a hard time. He's been washed, sprayed and is having a well-deserved rest until he's needed again. Our Super Ted."