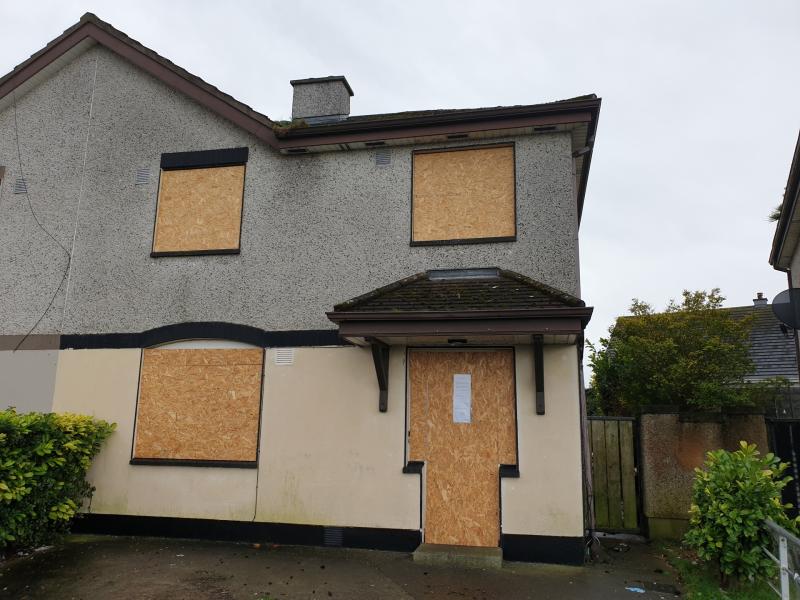 Offaly County Council issued a notice to the tenants of this unoccupied house in Tullamore, ending the tenancy agreement.

SOME council tenants in Tullamore are subletting their houses, a councillor claimed last week.

Speaking at last Thursday's meeting of Tullamore Municipal District, Cllr Sean O'Brien called on the County Council to take action against the practice.

“You've people leaving houses and unofficially subletting them. They have entered into other arrangements with other members of the family or friends or whatever,” said Cllr O'Brien.

He said the council should “take back that house and reallocate it”. “We've got to do that because it's catching on in a number of estates now.”

Cllr Declan Harvey said he had come across several houses where the tenants were not present, but were paying the rent.

The Fianna Fail councillor said he did not know whether the people were “hoarding” the houses or using them “every so often” and he hoped the council could find out more about what is going on.

The councillors' comments came as housing officer Monica Cleary said she hoped construction work on the 18 new council houses at Chancery Lane will be finished by April.

Four of the houses are for a “group housing scheme” for members of the Travelling community and the council is working with an approved housing body, CENA, in relation to their provision, said Ms Cleary.

Elsewhere in the Tullamore District, four units being built by the Mid Offaly Housing Association in Mountbolus are “subtantially completed” and nominations on tenancies have been sent to that association.

While councillors welcomed the progress on the houses, especially the 18 at Chancery Lane, Cllr O'Brien said the local authority was still only “scratching the surface” on housing given the massive waiting list.

He said the completion of the Chancery Lane scheme was five months behind schedule and added: “It's 18 units, but there's 618 hoping to get them. That's the difficulty we have.”

Ms Cleary also reported on two other forthcoming schemes, including two which will be developed by the Oaklee housing body.

Oaklee plan to build 19 units on a site in Clonminch and 41 units at Kearney's Field. The Clonminch project is the furthest advanced and but has yet to go to tender.

“At best they will commence construction in July, and maybe not until after the builders' holidays in September,” said Cllr O'Brien.

He predicted it would be the end of 2021 before another house is going to become available in Tullamore from the council. “To me that is simply not acceptable,” he said.

Meanwhile, the waiting list would continue to grow and he would continue hearing stories of people in “extreme difficulty” living in properties under the HAP (Housing Assistance Payment) scheme. There are 443 such tenancies in the Tullamore District.

He called on the council to build 100 houses in 2020. “And the same next year and the year after. If we don't we're going to finish up in a disaster zone,” he said.

Asked by Cllr Neil Feighery, Fine Gael, to clarify who he thought should build the houses, Cllr O'Brien said the council should do so, not approved housing bodies.

Cllr Frank Moran, District chair, said he did not agree with the use of approved housing bodies for social housing because unlike council houses, those properties could never be bought out by tenants.

Cllr O'Brien called for more inspections to be carried out on houses in the HAP scheme, an appeal which was echoed by Cllr Harvey.

Cllr Harvey said he had seen up to six houses which were in “absolutely dire” condition. “Believe me, I wouldn't live in them,” he remarked.

He believed the tenants were not reporting the condition of their houses to the council because they feared being “turfed out” by the landlord.

Cllr Ken Smollen, Irish Democratic Party, said he agreed with both Cllr O'Brien and Cllr Harvey, and said people should not have to live in houses where there were health and safety concerns.

Cllr Smollen also said “something should be done” about cases where only one person was living in a three-bedroom house “for maybe well over a year” following a split in a family or a couple.

The meeting was also told that progress had been made on a plan for 38 houses at Raheen, Clara. These will be provided directly by the council and a design team has been appointed.

Separately, three dwellings specifically for older people will be provided at Church Street in Clara by the council.

Though he welcomed the proposals for Clara, Cllr Moran said he would be concerned if projects like the one in Raheen would have a negative impact on potential private developments by breaching quotas laid out in the National Development Plan.

Councillors also expressed concern about the number of vacant private properties in the Tullamore area and were told by Ms Cleary that contact had been made last year with landlords who could be identified.

“While some did get in touch with us, nothing really came from it,” she said. “We wrote out again in January of this year and a number of people have come back to us again and we are working with some people.”

She further reported that 19 houses were acquired by the council in 2019 but did not have figures for how much they cost. Another five were bought by approved housing bodies.

Another source of social housing for the council is the 'Part V' legislation whereby a certain number of houses in private residential developments have to be allocated to the council.

Ms Cleary said agreements had been made for 13 units “over the 2019 to 2021 period” but the provision of these houses is subject to sales.

The council bought additional land in Chancery last year, beside the 18-unit scheme which is nearing complete, and it will accommodate a further 18 to 20 houses.

A report to councillors at a meeting of the County Council last November said the council was purchasing a site from CIE at Chancery Lane for €133,500.