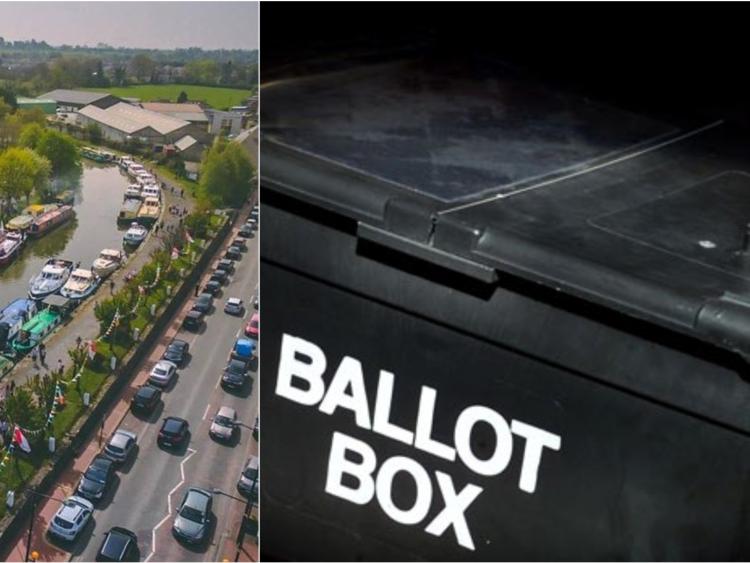 Who will Edenderry vote for? The mystery that could decide Laois-Offaly

The Laois-Offaly constituency could be among the most interesting in the general election on February 8. Will Fine Gael hold two seats with Marcella Corcoran Kennedy? Will Carol Nolan keep her seat after leaving Sinn Féin since the last election? Can Fianna Fail bring three TDs to the Dáil?

Much of the talk has centred on the 'Battle of Birr' which could decide the final seat in the constituency with the likely scenario pitting Cllr John Leahy, Cllr Peter Ormond and two sitting TDs, Marcella Corcoran Kennedy and Carol Nolan against one another for the golden ticket to Kildare Street. Almost as interesting as this is the mystery surrounding the destination of votes from the town of Edenderry.

With a population of 11,000 from Portarlington transferred into South Kildare for this election, Edenderry is the only major urban centre with no real town candidate. The areas of Ferbane, Birr, Kilcormac, Kinnitty and Banagher will be consumed by that battle between Corcoran Kennedy, Ormond, Leahy and Nolan. Tullamore and Clara is effectively Cowen country and he will pick up much of his quota there, but who does Edenderry vote for?

Independent councillor and former Fianna Fail candidate John Foley announced his intention not to stand in this election in the days after it was called by Taoiseach Leo Varadkar. Word soon filtered through that former councillor Fergus McDonnell was not putting his name forward, effectively leaving 4,500 votes up in the air.

You can trace the Edenderry vote fairly accurately back more than 20 years to the 1997 election when former councillor Ger Killaly picked up 4,328 first preference votes. As an auctioneer in the town at the time, these votes came primarily from the local areas in and surrounding the town centre.

Read also: The 15 confirmed candidates in the Laois-Offaly constituency for General Election 2020

He ran for Fianna Fail at the time and his running mates Brian Cowen, John Moloney and Sean Fleming mopped up votes elsewhere in the constituency. The four Fianna Fail candidates amassed 50% of the first preference votes between them in Laois and Offaly that year.

Killaly failed to get elected with the other three heading to the Dáil. Edenderry went for Killaly again in 2002 when he picked up a slight increase with 4,719 first preference votes. He once again missed out while Fianna Fail again took three seats and assumed power in Leinster House.

In 2007, John Foley was the Fianna Fáil candidate and he mopped up votes around North Offaly and almost monopolised the vote in Edenderry. The Kerry native was also a very prominent businessman in the town and remains hugely popular with the electorate there, evidenced by his re-election to Offaly County Council in May 2019. In the 2007 general election, under the Fianna Fail banner, Foley collected 5,899 first preference votes and despite transferring strongly, he couldn't bridge the gap to John Moloney who was re-elected at his expense by a margin of 311 votes.

Foley left Fianna Fail between 2007 and 2011 but he held onto the Edenderry vote base with 4,465 first preference votes as an independent in that year's general election. The Fianna Fail factor may have accounted for the loss of votes between both elections but the town ballot was forthright and very easily identified in the Foley column. He transferred well enough in 2011 but failed again in his Dáil bid. Sean Fleming ultimately beat John Whelan of Labour into the last seat.

2016 saw a major change to the electoral boundaries with Laois and Offaly being separated for the first time in the State's history. Offaly was redrawn as a three-seater and took in parts of North Tipperary, complicating the spread of votes in the constituency. North Tipperary's contingent wasn't big enough to claim a seat and an opportunity was there for John Foley to take the third seat behind Barry Cowen and Marcella Corcoran Kennedy.

He received 4,200 first preference votes and was transfer-friendly from the likes of Eddie Fitzpatrick but Carol Nolan was a bolter for Sinn Féin in South Offaly and once again he was pipped to the final seat by a minuscule number of votes. It had been 311 in 2007, but agonisingly, it was 264 in 2016. It brought into question Edenderry's ability to elect a TD with the numbers garnered for local candidates so similar, and yet inadequate, over a 20-year period. If the turnout in the town had ever bucked and surpassed the constituency average, it may have crowned TDs in multiple elections.

Nevertheless, the town's vote is still significant in 2020, perhaps even more so with Portarlington siphoned off to South Kildare under 2017 boundary changes. Laois-Offaly returns but as a somewhat altered animal - the only truly Laois-Offaly town will vote in a different county. That ruled Eddie Fitzpatrick out in either constituency with many rural areas around Portarlington still voting in Laois-Offaly, but the vast majority gone to Kildare.

The landscape seemed ripe for John Foley to stand in the absence of Fitzpatrick and target those rural areas around Bracknagh, Clonbullouge, Rhode, Croghan and further afield in order to bulk up his first preference vote. He would, however, have needed a big first preference vote to stay competitive with those in South Offaly and may also have struggled for transfers.

His absence leaves Green Party candidate Pippa Hackett as the closest geographically to Edenderry. The Geashill farmer has already caused a stir in the area by picking up a council seat in May last year in the Edenderry Municipal District. She beat off competition from the well-known Fergus McDonnell by less than 50 votes for the final seat in the area. She had received 676 first preference votes but transferred surprisingly well.

In her favour on February 8 is the fact she is one of very few candidates who will get votes from both sides of the constituency. She will pick up votes around her own area in Geashill and the areas nearby on the Laois side still in Laois-Offaly. Her profile has also been raised by her election to the Seanad since her council election last year, but it's questionable whether the so-called Green wave will ever fully reach rural counties like Laois and Offaly. To grow her first preference vote enough to get competitive will be difficult.

In four elections from 2002 to 2016, Green Party candidates have garnered a total of just 3,700 first preference votes in Laois and Offaly, including the 2016 poll when the counties were separated and the Greens ran a candidate in each county. The party nationally is seen as transfer-friendly but mobilising enough first preference voters would seem unlikely in Laois-Offaly. They'll need young voters to flock to them, transfers from all quarters and a fair chunk of the votes going spare in Edenderry.

The Fianna Fail link is a major factor even though both Offaly candidates live a long way from Edenderry. Barry Cowen has Tullamore and Clara sown up while Peter Ormond will be hunting votes in Birr. However, the thing that joins John Foley and Ger Killaly and their vote-getting in Edenderry is their link to Fianna Fail - both having run under their banner at one time or another.

The party is very active locally and had two councillors elected in the Edenderry Municipal District in last year's local elections. With a better-managed vote, they could have got three candidates over the line. They have also regularly secured three seats in Laois-Offaly over the years. A portion of the 4,000 or so votes in Edenderry may well filter back to Fianna Fail in the shape of Clara native Barry Cowen, given his family's legacy vote across the entire county. That could help him top the poll ahead of Sean Fleming but Edenderry's vote is most likely to splinter beyond that.

Pippa Hackett will get some, as will Ken Smollen who runs a food appeal in the region and has been visiting Edenderry during the election campaign. There could well be votes for Sinn Féin in Edenderry despite their local election collapse in Offaly, so Brian Stanley, who has also been canvassing in the town of late, could get a small bounce despite being Laois-based, particularly in the absence of a Sinn Fein candidate on the Offaly side of the ticket. Those in South Offaly are highly unlikely to have the profile to collect votes in Edenderry. The same can be said for the other Laois candidates.

Fine Gael won't expect to pick up many votes in Edenderry. They too have two councillors in the Municipal District but Noel Cribbin's vote base is very much a personal one. He has previously been in Fianna Fail and elected as an independent with his base relatively unchanged through those changes. Liam Quinn is a decent vote-getter in rural areas of the district but only a small percentage of both their bases will transfer to Marcella Corcoran Kennedy, despite rigorous canvassing in recent weeks.

Edenderry people have long bemoaned their lack of representation in Leinster House. The lack of a TD has been blamed for economic and infrastructural deficiencies in the town and now they must contend with not even having a candidate. Without a local candidate, turnout is also bound to be dented.

A number of candidates running this time have attempted to stress that they would be TDs for all of Offaly and not just their own areas. However, the consensus is that Edenderry has faired worse than other towns economically in recent decades, proven by GeoDirectory reports regularly showing it to have a very high rate of commercial vacancy.

The threat of Edenderry Power Station possibly closing within the next decade and the number of people leaving the town every day to work in Dublin and beyond is a major worry, as is the lack of tourism with the sector seemingly booming elsewhere in the county.

What do voters in Edenderry fear most? The candidates arriving now to fish for the floating votes not being seen in the town beyond February 8, 2020.