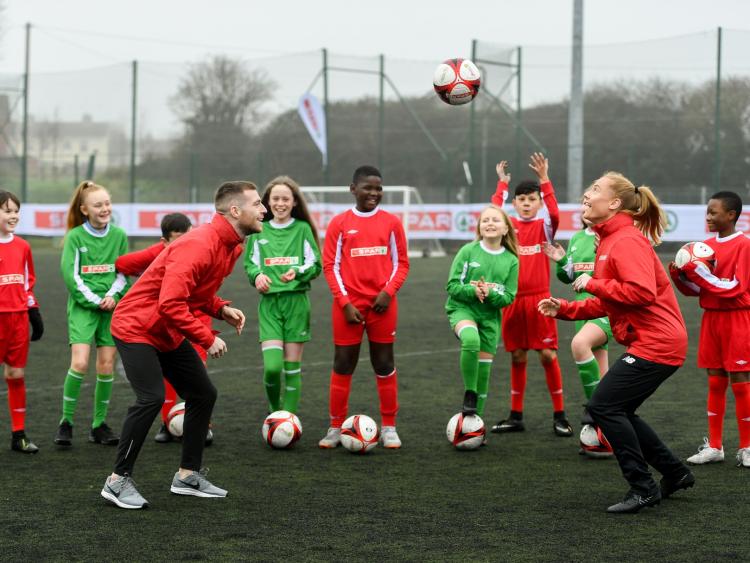 More than 38,000 primary school students are expected to compete for SPAR5s title, with national finals to take place in the Aviva Stadium

SPAR FAI Primary School 5s Ambassadors, Republic of Ireland International footballers Jack Byrne and Amber Barrett are urging primary schools in Offaly to sign up to the fun five-a-side football programme, which is now the largest primary school’s programme of its kind in Ireland.

Open to boys and girls from 4th, 5th and 6th class, the emphasis is firmly placed on fun, inclusivity and fostering a passion for physical activity. SPAR, in its 6th year as supporters of the programme, are looking to surpass 2019 participation figures, which saw a record 1,696 schools and 37,448 children take to pitches around the country. Offaly schools have been to the fore in the competition with 39 schools taking part in 2019.

Registration for the programme will close on February 14, and county blitzes will kick off at the end of February so act quickly and sign up online at www.fai.ie/primary5.

Winning schools progress from county level to regional then provincial finals, with a lucky 24 schools making it all the way to the National Finals, which will be held on the hallowed turf of the Aviva Stadium on May 12.

SPAR has been supporting the programme since 2015 and has seen participation figures grow significantly to become the largest primary school’s competition in the country.

The number of schools signing up for the participation programme has jumped from 1,064 in 2015 to 1,696 last year.

Particularly pleasing for SPAR has been the increase in the number of girls taking part, 36% of participants in Offaly are now female and SPAR, as well as Republic of Ireland Women’s International Amber Barrett, are eager to see this number rise again in 2020.

Speaking about the programme, Colin Donnelly, SPAR Sales Director said: “We are very proud to support the SPAR FAI Primary School 5s Programme which has grown significantly over the past five years. As one of the most successful grassroots sports programmes for children, the sponsorship very much fits with SPAR’s focus on community retailing. SPAR retailers look forward to working with local schools in communities across the country to further grow the programme in 2020.”

Robert Moran, Chairman FAI Schools, added: “The competition is growing at an exponential rate with the standard of football improving each year especially in the female category. We are excited about the new season and our partnership with SPAR, who have invested significantly in the SPAR5s over the last six years. 2020 should prove to be another thrilling contest for all the participating schools nationwide."

Register for the SPAR FAI Primary School 5s Programme by February 14 at www.fai.ie/primary5.