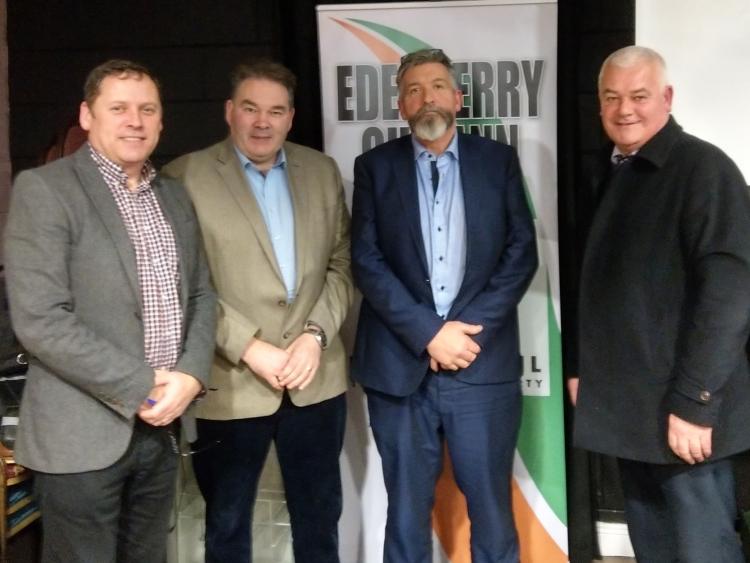 A farming discussion hosted by Edenderry councillor Robert McDermott has heard about the challenges facing farmers in the area and beyond.

The event took place in O’Donoghues’ Lounge, Edenderry, where Cllr McDermott addressed those in attendance.

He outlined the difficulties in the current economic climate for farmers and that he felt it necessary to organise this discussion to assist the local farming community with the challenges and difficulties that lay ahead.

A number of guest speakers were also secured for the night and they were thanked by Cllr McDermott for their attendance. He also welcomed councillors Eddie Fitzpatrick, Tony McCormack, Danny Owens and former councillor Noel Bourke.

Mr John Furey, an entrepreneur and farmer himself chaired the discussion. The format was presentations by guest speakers followed by questions and answers.

The first speaker Mr Peter Doolan from Teagasc spoke of a summer, autumn and a winter of discontent for farmers and that current sentiment was poor. He outlined that there are 3,480 farms in Offaly averaging 90 acres with 4,345 employed fulltime.

There are another 1,500 employed indirectly as in the food industry. Offaly is a county of mixed enterprises in farming of suckler cows, beef, sheep, pigs and tillage. Mr Doolan spoke of the low prices in the farming industry but stated that pig prices are at a 20 year high due to disease in China.

"Farming is always only a food scare away from the market being changed," he explained.

"On average farm income in Ireland is up for 2019 as the drought in 2018 had a serious impact on farm incomes. However EU prices have now gone up and Ireland has fallen behind."

Mr Doolan spoke of a two-tier economy in relation to agriculture in that dairying is well ahead of beef. Cattle rearing and tillage farming prices have stagnated. He expects some small price increases in 2020 but no major changes. He did say however that An Bord Bia is concentrating on new markets in Holland, Italy, Germany and China to replace the UK.

The second speaker Mr Pat Daly a local mixed farmer spoke of his journey in farming and how he decided to diversify in order to increase his income. He advised farmers of the option of looking outside farming to generate additional income and told his story of how he diversified. He made a decision to get out there in the market and see what was available and by doing that he made contacts which encouraged him to pursue further. After some training he started working at external insulation and continues to do so to this day. He also diversified into another business of building dog kennels and continues to do so
successfully.

The third speaker was Senator Paul Daly. Senator Daly is a native of Kilbeggan, Co Westmeath and is FF spokesperson on Agriculture, Food and Marine. He is a member of the Joint Committee on Agriculture, Food and the Marine, the Joint Committee on Climate Action and also the Brexit Committee. He is also a farmer. Senator Daly gave his personal
opinion on Brexit. He said that even though Boris Johnson, the UK Prime Minister, had a majority in government in the UK, the real negotiations will begin on February 1, 2020.

He described it as "ambitious" for Mr Johnson to think the negotiations will be concluded by the end of 2020 as he said that he will not be looking for an extension of time. Senator Daly is of the opinion that Ireland is facing the prospect of a hard Brexit more than ever. He says that one of the major issues for the Irish Government going forward is to maintain the solidarity of the other 26 countries in the EU. Another issue is the UK negotiating trade deals with third parties for example the USA. In relation to the Beef Sector it is well known that the beef farmers are not getting a fair price. When sterling fell recently the beef prices fell.

Senator Daly believes that there was a crisis in the beef sector before Brexit. With regards to Climate Change Senator Daly’s opinion is that the farmers are being blamed for everything. He said that the farmers of Ireland are the custodians of the environment and that between 1990 and 2016 agriculture has reduced emissions by 3.5%. In the same period transport has increased by 139% and energy production has increased by 116%.

Senator Daly believes that farmers need to be encouraged and not forced in relation to climate change. There are 440,000 hectares of hedgerows in Ireland for which the farmers are not getting credit. He spoke of the versatility of the farming community and their ability to overcome problems. Senator Daly believes that farm representative bodies need to get
involved and support the farmers more in the climate change debate.

The fourth and final guest speaker was Deputy Barry Cowen, TD, and FF spokesperson on Public Expenditure and Reform. Deputy Cowen spoke of parliament reflecting Irish society as a whole which includes the farming sector and this ensures that the right policy is initiated to represent that sector. He spoke about the impact of the threat of Brexit to Ireland and provisions in the recent budget in the event of a crash-out Brexit.

He said it is necessary to deliver policy that resonates with constituents and the farming community which recognises the contribution of the farming sector in this constituency. Deputy Cowen also spoke on transition in Offaly and the Bord na Móna and ESB situation and its impact in the county. He spoke about the loss of jobs for the area and diversification by Bord na Móna.

He said that it is important for a structure to be put in place that benefits this community, this county and this region. Carbon tax revenue should be reinvested in areas that are most affected by the whole decarbonisation programme and that process began in this year’s budget on the insistence of Fianna Fáil. Targeted funding is required for Offaly in relation to infrastructure deficits for example 40% of roads in Offaly are built on peat foundations and requires targeted funding.

Cllr McDermott said that there was a very frank and robust questions and answers session following the presentations and speakers. He said that he hoped it was informative and of benefit to all who attended. He again wishes to thank most sincerely all those who gave of their time and thanks all who attended on the night and for their input and engagement.