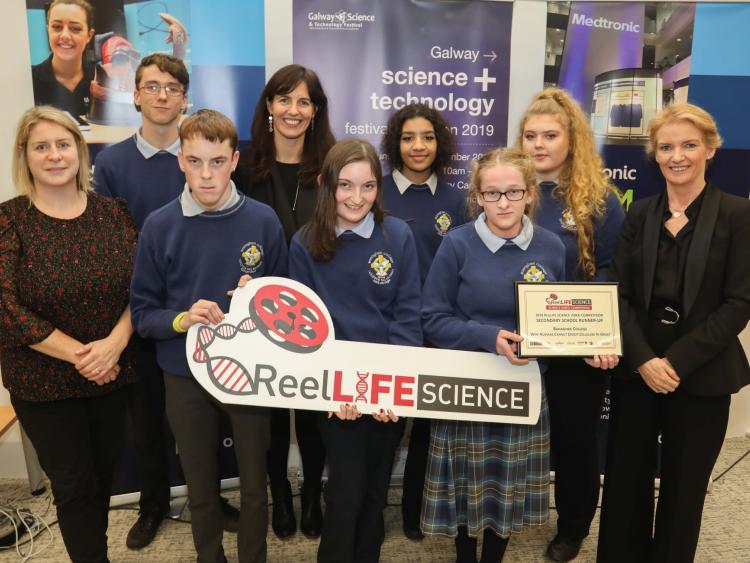 Short films about Climate Action, Hearing and Water were to the fore when young science filmmakers from Donegal, Dublin, Cork, Galway, Offaly, Sligo and Meath were honoured at the ReelLIFE SCIENCE Video Competition Awards held at the recent Galway Science and Technology Festival Exhibition in NUI Galway.

More than 190 short science films were entered into the competition by over 1,300 science enthusiasts from 77 schools and community groups around Ireland.

Winning videos were selected by a distinguished panel of judges including geneticist, author and BBC presenter Dr Adam Rutherford; BT Young Scientist and Technologist of the Year 2019 Adam Kelly; and Met Éireann Meteorologist and RTÉ Weather Forecaster Joanna Donnelly, who presented the prizes along with Science Foundation Ireland Head of Education and Public Engagement Margie McCarthy.

A group of nine sixth class students from Baltydaniel National School in Newtwopothouse, Co. Cork, along with their teacher Colman Lane, won the €1000 first prize at Primary School level for their video ’No New Water’. Primary school runners-up were Gaelscoil Riabhach from Loughrea, Co. Galway, while Sooey National School from Sligo finished third.

Based in NUI Galway and supported by the Science Foundation Ireland Discover programme, the Community Knowledge Initiative, the CÚRAM Centre for Research in Medical Devices and the Cell EXPLORERS science education and outreach programme, ReelLIFE SCIENCE challenges Irish schools and community groups to communicate science and technology via engaging and educational short videos. Since being launched in 2013 by Dr. Enda O’Connell and a team of volunteer scientists, this challenge has been met by more than 13,000 participants in 400 schools and groups around Ireland.

Speaking about ReelLIFE SCIENCE, Dr Ruth Freeman, Director of Science for Society at Science Foundation Ireland, said: “We are delighted to support this initiative, which cleverly combines science literacy and creativity, while providing a great opportunity for students and teachers to think about how to communicate scientific topics in a novel way. ReelLIFE SCIENCE encourages young people to connect with the science and technology in their everyday lives, and to bring that knowledge to a wider audience, while promoting current Irish scientific research and development.”

All videos can be viewed at www.reellifescience.com.