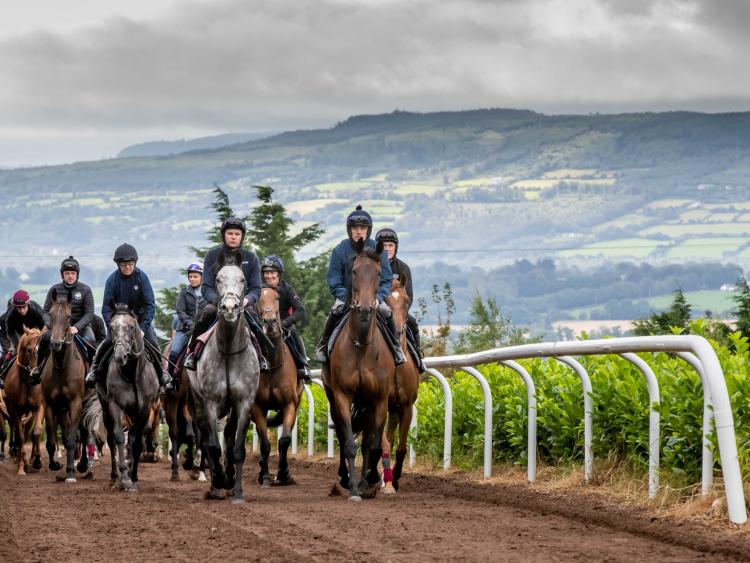 Champions training for Pat Smullen's charity race at the Curragh

It wasn’t just the best of racehorses getting a workout on the famous gallops on Owning Hill this morning as five renowned champion jockeys were back in the saddle ahead of the Pat Smullen Champions Race for Cancer Trials Ireland at the Curragh on Sunday, September 15.

Four of the greatest jump jockeys of all time, Ruby Walsh, AP McCoy, Paul Carberry and Charlie Swan joined former champion Flat jockey and Classic winning trainer Joseph O'Brien at his Piltown yard as the quintet continue to get their eye in ahead of a massive fundraiser on both days of the upcoming Longines Irish Champions Weekend.

They will be joined at the Curragh on Sunday week by fellow champions Johnny Murtagh, Richard Hughes, Kieren Fallon and Ted Durcan in the nine-runner Pat Smullen Champions Race for Cancer Trials Ireland over the straight mile.

Pat planned to ride in the race himself but was forced to pull out after a health setback last month. He has been battling pancreatic cancer since early last year and has undergone a number of surgeries and bout of chemotherapy.

The race will be run as the seventh on a stellar card that boasts four Group 1s and will feature alongside a number of other fundraising activities happening over the weekend for Cancer Trials Ireland – the leading cancer research trials organisation.

Cancer Trials Ireland has two pancreatic trials ready to start - one is a trial on a new drug and another in radiotherapy, and all proceeds raised over Longines Irish Champions Weekend will ensure that they start as soon as possible.

After riding out this morning, Charlie Swan said: “It was nice to see the guys and it’s obviously all for a very special cause.  I rode a few winners at the Curragh at the beginning of my career as an apprentice with Kevin Prendergast and one of my best memories of the time is beating Lester Piggott by a neck to win a handicap over the mile course that we’ll be riding on next Sunday week. I was probably 17 at the time. It is going to be a wonderful occasion and we are all very much looking forward to it.”