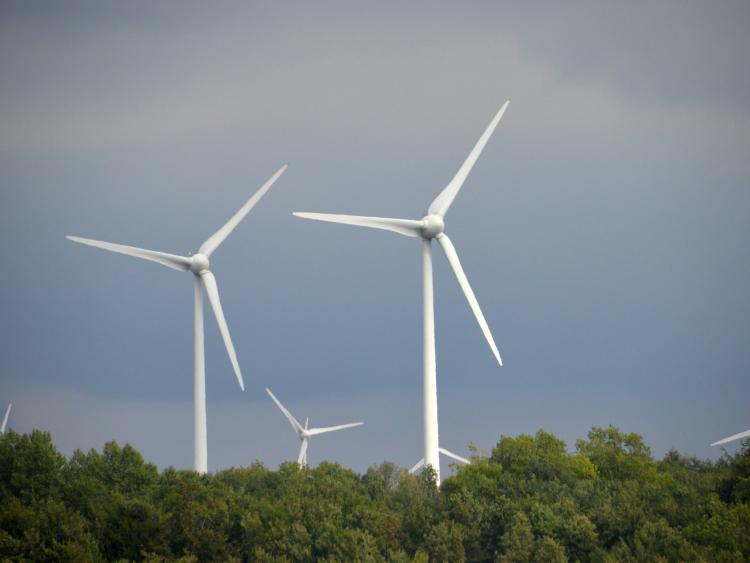 FEATURE: The Offaly farmers fighting for wind farm as income takes a hit

Derryarkin near Rhode is a typical rural Co Offaly community. A national road cuts through the expanse of the bog while the picturesque landscape, shadowed by Croghan Hill, is dotted with cattle sheds, troughs and small forest plantations.

There is also an air of unrest as a group of farmers and landowners continue a dispute with Bord na Mona over a €120 million wind farm development. They say their livelihoods are at stake if the 29-turbine project does not go ahead.

The farmers allege that Bord na Mona is blocking the Green Wind Energy Ltd development by not allowing the laying of underground cables beneath one of their rail lines in the area. The Yellow River Wind Farm was given full planning permission by An Bord Pleanala in 2014.

This wind farm has been in the works since 2010 when the 22 landowners were approached. They stand to benefit from an initial payment and an ongoing annual revenue stream for allowing the Wexford-based company erect turbines on their land.

"Projects like this offer a supplementary income for farmers. As it happens, there's no dairy here; it's all beef producers, and we're enduring difficult times with prices. That is well documented so that's why we turn to opportunities like this," Eamon Naughton said on behalf of the impacted farmers' group.

The employment landscape in Rhode is ever-changing with the environment shaping the lives of farmers and past and present Bord na Mona workers alike. "This is the biggest private wind renewable project in the country at the minute. It will save the taxpayer tens of millions in fines that will be imposed when EU targets are not met in 2020 or 2030," Eamon explained.

They have all turned to the elements and although 84 people and organisations, including Bord an Mona and a host of locals, objected to the original Yellow River Wind Farm plans lodged with Offaly County Council in 2014, Eamon says, "everybody is a winner in this."

"There weren't too many objections but they made a huge furore, but again their objections were unfounded. Of course, people object to anything, whether it's building a house or whatever, there's always someone to object."

He says the community stands to benefit from the wind farm and reckons the locality and country need multiples of them. "We have pledged €1,000 per megawatt, and this project is over 100 megawatts, per annum, in contributions to the local community here in Rhode - over €100,000 a year. So, it's great for the local community as well as the farmers."

This dispute in Rhode, however, is about more than the lining of anyone's pocket, or one company or individual project. The farmers' connection to the land at Derryarkin is generations deep and the highways and byways there are still bound by tradition.

The road beneath which the cables would run has been a right-of-way route for farmers in the area for decades. It has remained busy with farm machinery and cattle while the Bord na Mona train tracks rusted and fell into the landscape through infrequent use.

"There are people in our group whose fathers lay down in front of the bulldozers of Bord na Mona trying to block them from taking this land here in Derryarkin - to no avail. They gave them 10 shillings to a pound an acre for it. It was taken, effectively confiscated, from them for peat milling and now that's been exhausted, it should be handed back to the farmers."

The smoke from the nearby Edenderry Power Station still plumes on the horizon but is now a by-product of biomass, itself trucked past working farms in Rhode as it leaves the motorway.

"What kind of carbon footprint is that leaving?" Eamon queried. "Farmers have to reduce stocking levels because of CO2 gases and gases from livestock via an EU directive, but Bord na Mona can bring stuff from the far end of the earth in Australia and take it into Edenderry there."

"That's why we have to think outside the box and move into the likes of wind projects. It's our future as well as everyone else's."

With the end in sight for peat and biomass-burning refused at Shannonbridge and Lough Ree, Bord na Mona is too turning to wind and solar power.

They already have an anemometer testing the wind speed for future turbines on adjoining lands along the Yellow River, a matter of metres from the site of this disputed development.