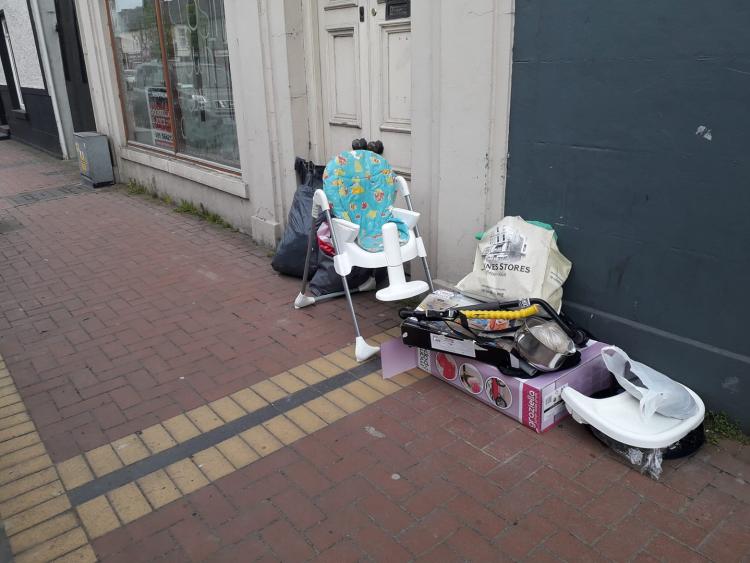 As most people in the county enjoyed the fine weather over the May Bank Holiday weekend, the members of the Edenderry Tidy Towns Committee were out in force for their usual weekend litter pick.

Usually the committee stumble across beer cans, bottles and remnants of late night after pub feasts from the local takeaways, but on Bank Holiday Monday morning, they were genuinely shocked at what they discovered.

Illegal dumping very often takes place in the cover of darkness on country roads or bog lanes, and is fast becoming a major issue in Offaly, but at the weekend, this collection of baby equipment and household rubbish was dumped on JKL Street, the main street in Edenderry.

Long time secretary of the Edenderry Tidy Towns committee, Offaly County Councillor, Noel Cribbin, vented his frustration after making the discovery. "This was dumped on our main street at 7am this morning [Monday]," he said.

"We are checking CCTV footage and our litter warden will once again be busy cleaning up after these despicable people," he added.

At last month's Offaly County Council meeting, a number of councillors called for more stringent punishments and a name and shame policy for illegal dumpers, but this concept was shot down by council management as it would brach the law. Illegal dumpers brought to court can however be named in local media reports.

Offaly County Council has issued close to 100 fines for littering and illegal dumping since the beginning of the year.