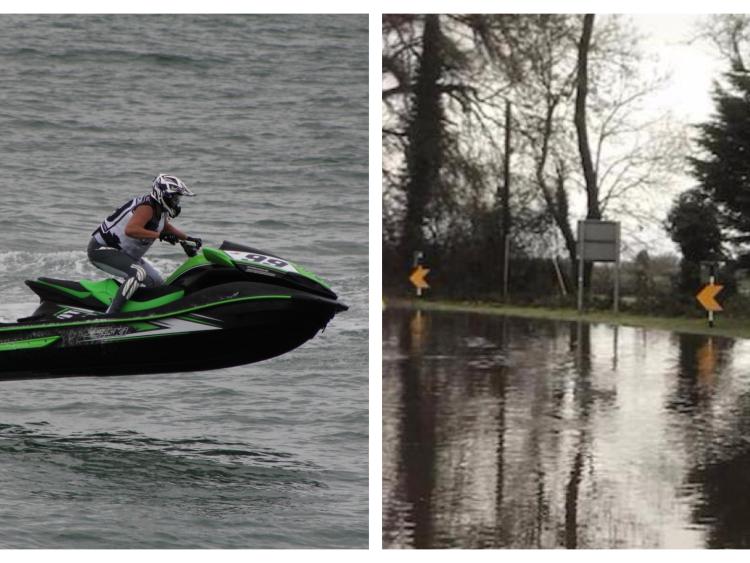 Offaly TD Marcella Corcoran Kennedy has called for action on flood measures and road surfaces having said people were able to jet ski across flooded roads in Offaly in recent weeks.

During a Dáil debate on roads maintenance funding, Marcella spoke of the R438 Borrisokane to Athlone Road that runs right through Offaly, and has been prone to flooding. In fact, an area in Offaly at Taylor's Cross has been closed due to flooding on two separate occasions this week after heavy rainfall.

"The last time that road was so heavily flooded, people were able to jet ski on it because it was like a huge pond. I do not advocate such behaviour but it illustrates how much water was on the road," Marcella said in the Dáil.

The Offaly TD also raised the issue of road surfaces, many of which are in disrepair in Offaly. "Over the Christmas recess I had the opportunity to traverse County Offaly more thoroughly than I would while the Dáil is in session. Many of the important routes in the county are in a state of disrepair following harsh winter weather conditions and persistent heavy rainfall, coupled with the unique circumstances that pertain in Offaly and parts of north Tipperary as a result of the extent to which our road network crosses boglands," Marcella explained.

She spoke of a number of regional routes where driving conditions are hazardous, despite some of the routes being regional roads with speed limits of 80km/h.

"I drove the R436 recently when I did my clinics from Tullamore, back through Ferbane and on to Moystown Cross via Belmont. That road is in dreadful condition for a regional route. The road is actually subsiding at the edges and in the middle, not to mention the amount of potholes, and it is really dreadful to see the damage there," she stated.

"In recent weeks, I have been inundated by constituents contacting me to express concern and frustration with the condition of the roads," she added. She also flagged the R357 from Blueball to Shannonbridge road and parts of the N62 and N52 as routes that require immediate attention.

She went on to say, "now that the economy has recovered and we are all working in a determined manner to attract enterprise and increased tourism activity to the county, the road network urgently requires additional investment that recognises the very specific nature of the network, which is built on peat foundations."

"The surface of such roads will last for approximately five years in normal conditions compared to an expected lifespan of 20 years for roads built on proper foundations," she added.

"It is apparent following the recent persistent rainfall that structural problems are developing on the regional, local and tertiary road network, which means that local authorities in Offaly, Tipperary County Council and Laois require additional funding from the Minister’s Department to help mitigate the problem before it gets worse."

"There needs to be recognition that rural dwellers pay their motor taxes, their property taxes, their VRT and so on. They depend on the road network to go about their daily lives. I am very concerned about the deteriorating condition of the regional, county and tertiary road network," she concluded.

Minister for Transport, Tourism and Sport, Shane Ross responded to Deputy Corcoran Kennedy and thanked her for raising this very important issue, which he said "has become even more acute" since he visited Offaly a few months ago.

Minister Ross continued: "The case was made very eloquently by the Deputy and by others for the difficulties experienced when roads have been built on peat foundations, and the effect that lack of investment has on these roads. I am particularly taken by the statistic given by the Deputy - and which was given to me on that visit - that a repair that might be expected to last for 20 years in the normal case might only last five years in some of the roads mentioned. The case made by the Deputy today should certainly be considered in the future when road grants are being handed out."

"The improvement and maintenance of regional and local roads is the statutory responsibility of each local authority, in accordance with the provisions of section 13 of the Roads Act 1993. Works on those roads are funded from local authorities’ own resources supplemented by State road grants. The selection and prioritisation of works to be funded is, therefore, a matter for the local authority," he added.

He concluded by saying, "when I am making any allocations in the near future, I will bear in mind Deputy Corcoran Kennedy's comments today."