Club amalgamations may be on the cards 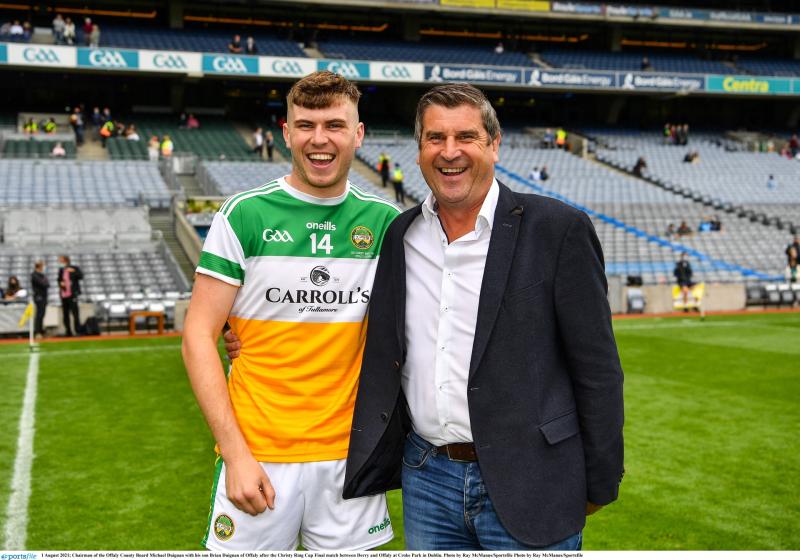 OFFALY GAA chairman Michael Duignan was in the happy position of being able to reflect on a memorable 2021 when he addressed annual Convention on Tuesday night but his focus was very much on plotting the way forward for the future.

The Durrow club man was elected unopposed for a third year as chairman and he spoke with great satisfaction about the achievements on the playing fields in 2021: success in the All-Ireland U-20 Football Championship, promotion to Division 2 and 1 of the National Football and Hurling League and the senior hurlers returning to the Joe McDonagh Cup by winning the Christy Ring Cup- while the 2020 minor footballers and hurlers competed in Leinster finals.

Mr Duignan urged people to be patient with the senior teams, noting that they will face challenging 2022 and that Division 2 football and Division 1 hurling are big jumps. “Expectations are huge but they need to be tempered,” he remarked. “We want to be competing at the top lebel but these are huge jumps and people need to be patient,” he urged.

Off the field, it was also a great year for Offaly GAA as they had a dramatic turnaround in their financial fortunes – the accounts were presented by treasurer Dervill Dolan earlier in the meeting and they showed a surplus of €197,969, compared to a whopping €259,983 loss in the previous year.

Mr Duignan thanked all associated with the finances, their main sponsors, Club Faithful and the Offaly Association in Dublin for fundraising ventures. He expressed particular satisfaction at the success of the Grand Canal Walk earlier in the year – a joint fundraiser between clubs and County Board, it brought in over €100,000 for the County Board with 7,000 people donating.

He described it as another exceptional year for the GAA, stating that people had to dig deep because of Covid-19 restrictions. “I am very proud of the way people embraced the challenges and drove forward,” he smiled.

The main focus of his speech was on the board's Strategic Plan. Mr Duignan revealed that this is nearly ready but hasn't been published as clubs have to be consulted as part of the process. He stated that many key parts of the plan are being already implemented and he outlined the bones of their vision.

He announced that the number of full time coaches has gone up from three to five in the past year and an additional six will be employed in the new year, bringing it up to 11 by the end of January.

He outlined the five pillars of the Strategic Plan:

1: Sustainable club coverage – a sustainable network of clubs providing positive entry points to the gaelic games family by maximising participation and provision of excellent facilities. Mr Duignan commented that a number of Offaly clubs are very small and amalgamations will be the way forward.

2: Vibrant games programme – A defined calendar of games via club and schools, providing meaningful participation for all levels.

3: High performance pathway for high performers to excel at county level. Mr Duignan talked here about the importance of development squads and ensuring players are ready for senior intercounty football and hurling when they reach the right age.

4: Financial stability – ensuring that club and the County Board are financially stable with robust procedures in place.

5: Respected brand – that the Offaly brand is synonymous with excellence on and off the field.

Mr Duignan used the Offaly team that won the All-Ireland U-20 Football Championship in 2021 as an example of this, stating that they played with freedom and without fear or failure. He said that Offaly is liked all over the country because they have won so much against the odds and he felt the U-20 team won fans all over the country.

He spoke in favour of the GAA's one club model, where GAA, camogie and ladies football come under the one umbrella in areas where these sports are catered for and agreement is reached. He stated that this has worked very well in the clubs that have implemented it and he urged others to follow suit.

The former Offaly hurler and footballer thanked all who helped run the fixtures programme in the county, noting that 512 underage games were played in 2021, which is doubled what was played in 2019. This doesn't include successful tournaments such as the Jack Wyer and Gerry Conway Tournaments ran by Ballinamere and Tullamore GAA Clubs.

Mr Duignan talked about progress in schools. He stated that it was great to see Colaiste Choilm in Tullamore playing in the A grade in all football competitions and he thanked all schools for their work.

He concluded by thanking the media for their “unrivalled coverage” of Offaly GAA affairs and expressing sympathy to the family of all members who passed away during the year.