Sensational win over champions not enough to save Birr's bacon 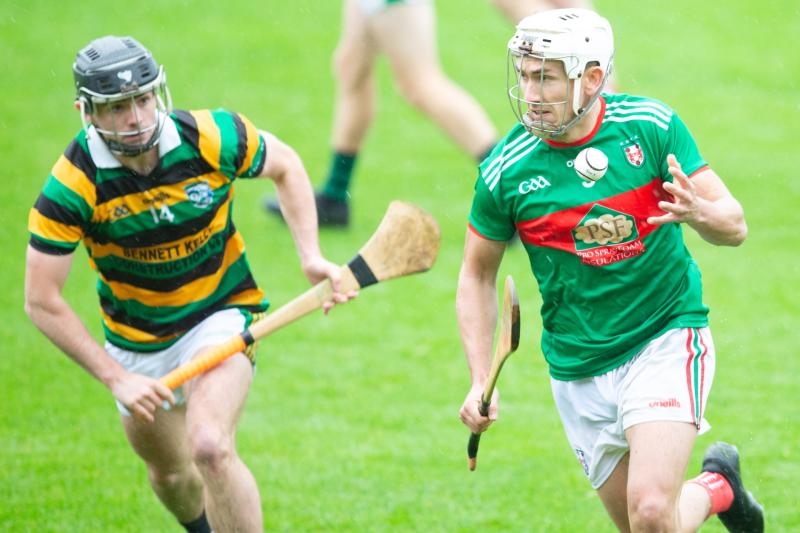 Birr bowed out of the SHC in agonising circumstances.

Birr’s sensational performance was not enough to secure their place in the Offaly Senior Hurling Championship. They beat St Rynagh’s in emphatic style, by 13 points in the end, but it was not enough as Shinrone edged them out to join Coolderry, St Rynagh’s and Kilcormac/Killoughey in the last 4.

In order to go through to the semi-finals, Brendan Bugler’s charges knew it would take an almighty performance to progress and from the start, it was obvious that they were fired up for it. They came racing out of the blocks and raced into an early lead. Eoghan Cahill, Luke Nolan and Colm Mulrooney all fired over early scores.

When Joey O’Connor pointed midway through the first quarter, it looked as if St Rynagh’s may settle into the game, but it was Birr who continued the onslaught. They had the backing of a strong wind and Eoghan Cahill’s two long distance frees showed the influence of the wind on the game.

They were firing off all cylinders at the early stage, and they carried a seven-point lead into the first water break.

The water break certainly did not stop the Birr train and Eoghan Cahill fired over three points after the stoppage. Aidan Treacy did point a free, but it was all Birr as they dominated in all sectors of the field. Although they were playing with the aid of a strong breeze, St Rynagh’s were shell shocked, and they were really struggling to gain a foothold in the game.

Much of the crowd in Carraig on Sunday afternoon were expecting a huge performance in the second half from the reigning champions, but it just never came.

Cahill, Lochlann Quinn and Morgan Watkins all scored fine points to increase the lead to 12 points early in the second half. Luke O’Connor kept Rynagh’s in touch from his placed ball accuracy, but Birr were in complete control.

Luke Nolan had a wonderful goal chance in the third quarter to all but end the game, but Conor Clancy pulled off a wonderful point blank save to deny the Birr sharpshooter. They did eventually get their goal just before the water break when Morgan Watkins was quickest to latch onto a loose ball and he buried it past Clancy to guarantee victory.

As the game entered the fourth quarter, much of the focus was on other games elsewhere, Birr knew they needed more scores, but they just didn’t come. St Rynagh’s mounted a small comeback late on to reduce the deficit in the end. Sean Dolan fired over the pick of these late on while Dermott Shortt and Luke O’Connor also contributed to the scoreboard.

When news broke that Shinrone had taken a significant lead, Birr needed goals. They did drop some balls in on top of Paul Cleary who was on the edge of the square, but Cleary was unable to find the net.

In the end, Birr finished as 13-point winners, but it was not enough for Bugler’s men and they bowed out of the championship in the cruellest of ways, on score difference.