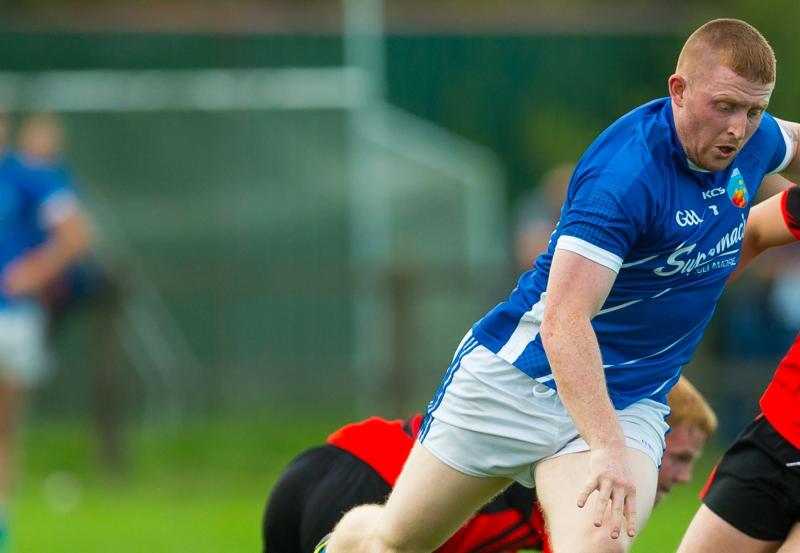 Aaron Hensey made a big impact for Tullamore off the bench.

Tullamore capped off a memorable weekend for the club as they reached the Junior Football Championship Final with an impressive display of point scoring in Ballinagar on Sunday morning.

They followed their senior team into a final, after they defeated Ferbane the day before. Added to that, Tullamore claimed its first ever senior ladies on Saturday also.

Tullamore’s ability to kick some impressive points over the hour was the difference between the two sides on Sunday morning.

The spread of scorers for Tullamore was also noteworthy as a number of their forwards weighed in with points, while Daire McDaid also popped up for some impressive scores.

It was an ability to kick points from areas throughout the pitch by Tullamore which proved the difference in the end.

Tullamore were in top in the first half and led at the break to 0-10 to 0-5 and were in a strong position, having played most of the football in that opening 30 minutes.

But Rhode upped their game in the third quarter of the match and this was the one period when they were on top, bringing the deficit back to just three points, with the score 0-11 to 0-8 with just over 15 minutes to play.

Tullamore’s only score in that period was from a mark from Mike Fox, as they lost their way somewhat on the scoring front.

It could have been much better for Rhode in the third minute of the second half as Steven O’Connell blazed over the bar when a goal looked a certainty.

However, with Aaron Hensey proving influential since his introduction, Tullamore found their feet again and a free from Kevin Williamson and then a brilliant effort from Jay Sheeran put them in a strong position again early in the final quarter.

With Tullamore finding their scoring range again, it always looked like Rhode would need a goal to get back into this game, but they were unable to breach their rearguard after that earlier chance, as Tullamore defended strongly over the hour and really only allowed Rhode that one opportunity.

This was a lively encounter from the off and the standard of scoring was generally high, and was arguably a more entertaining game than the Rhode v Durrow senior encounter later that day, although Rhode were undoubtedly happier with that result.

Tullamore began brightly and were in front early on with a well-taken point from Jay Sheeran in the first minute.

The sides then traded frees through scores from Donal Hickey and Kevin Williamson as the game ticked along at keenly-contested level.

Two points followed from Tullamore’s Mke Fox and James Coffey for Rhode, which were both great efforts.

Tullamore began to take control midway through the half and points followed from Tom Fulong, Shane Kelly and a free from Kevin Williamson, as they edged four points in front. Rhode responded though, through scores from Donal Hickey and James Coffey, as the game continued to entertain.

Tullamore then rattled off another two points from Mike Kelly and a free from Shane Kelly.

Rhode responded quickly as the game edged into injury time with a very smart point from Steven Connell who turned in a very tight space to shoot over.

Just after that, a flowing move from Tullamore ended with Jay Sheeran free on the left and he opted to place his shot low, which was saved by Phil O’Connell, a minute into injury time.

Tullamore stretched their lead to 0-10 to 0-5 at the break though, after a brilliant effort from Daire McDaid.

Rhode upped things considerably at the start of the second half and Barry Coffey kicked over a brilliant point, 30 seconds into the half.

They were just three points behind when Steven O’Connell finished a good run with a point, two minutes after their first score of the half. It looked like he would hit the back of the net, but his shot somehow went over the bar.

Mike Fox added Tullamore’s 11th just after that, but Rhode had the upper hand as they added another well-taken point from Barry Coffey.

At the second water-break, Tullamore were just three points ahead and the result was very much in the balance.

However, they regained advantage from then on and a pointed free from Kevin Williamson and a great effort from Jay Sheerin stretched their lead again.

Rhode responded through a free from Donal Hickey before a brilliant effort from sub Liam Dillane, who curled over a point from the tightest of space, after Aaron Hensey broke the ball to him.

Tullamore managed to close out the game in relatively comfortable fashion after that with another point from a mark from Daire McDaid before points from Glen O’Connell and Aidan Brereton reduced the deficit to four points.

Tullamore had some excellent performances from their younger players such as Mike Fox, Tom Furlong and Peter Fox, while Kevin Williamson and Shane Kelly showed their experience to lead through the middle.

Aaron Hensey had a big influence when introduced, while Ken Hogan worked hard throughout. All the defence performed well with Dylan Hensey, prior to injury, Shane Enright and Daire McDaid all having their moments.

Adian Brereton particularly stood out for Rhode while Barry Coffey, Glenn and Steven O’Connell, Shane Murpy and James Coffey all did well.

There were impressive performances for both sides, but two points and a generally composed performance from Daire McDaid gets him the nod.

Goal chances were rare in the match, with Tullamore missing one, but the pivotal chance came to Rhode early in the second half but the chance flew over the bar. Had a green flag been raised at that stage, the outcome would have been very much in the balance.

Joey Deehan didn’t get much wrong. There was a bit of a niggle throughout a competitive game, but he dealt with things in a composed manner.

The quality of some of the Tullamore forwards. Some of the Rhode people in the crowd acknowledged as much at the end of the game - and it certainly was an entertaining spectacle with both sides playing a nice brand of football.

The Ballinagar pitch was in fine condition and there were plenty of stewards on hand to ensure parking, and ease of entry etc for the crowd.

Tullamore will face Edenderry in the final. It will be a hectic few weeks for some of the players, who are still in action for underage teams, and also involved in the Senior B Hurling.