St Rynagh's pushed all the way by hard working Coolderry 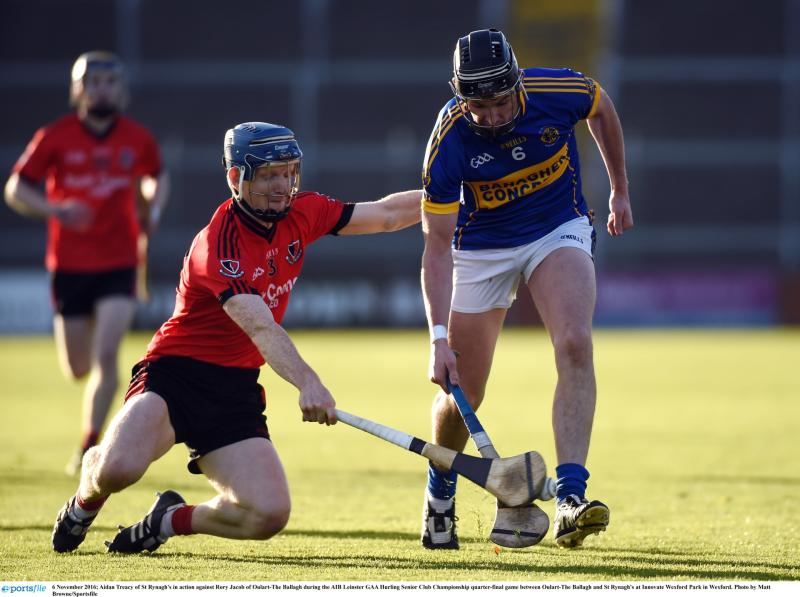 ST Rynagh's were pushed all the way before taking a giant step towards the semi-finals with a hard fought three point win over Coolderry in the third round of the Offaly Senior Hurling Championship in Birr on Sunday afternoon.

The champions were not at their best, they spent a good portion of this game in third gear and they missed more chances than they will be comfortable with but they will still be very pleased with this win and the way they dug it out.

They received a very stern test of character from a very hard working Cooldery team. They had to work hard to get the points and it is this aspect that will have pleased their manager Ken Hogan the most. They defeated serious opposition while not firing on all cylinders and it was character that got them across the line here.

St Rynagh's were the better side over the hour and probably should have won by more. They missed a good few chances and never fully closed the door on Coolderry. They weren't far away from being caught at the end. A brilliantly taken Brian Carroll penalty with four minutes left reduced the deficit to the minimum, 3-10 to 1-15 and St Rynagh's were on precarious ground.

They rallied the forces from here. Luke O'Connor showed great composure for a young man, firing over two late frees, the first of them a huge one from well over 70 metres. That gave them a three point lead and there was no way back for Coolderry.

With three wins out of three St Rynagh's are motoring very nicely and will almost certainly make the semi-finals now. The defeat is far from a disaster for Coolderry. They have four out of six points and their fate is very much in their own hands.

This game was not the classic that it could have been but that was down mainly to the conditions. With the promised rain arriving in from the west, conditions were not conducive to free flowing hurling as the ground became heavy, sapping the energy of players as it wore on. Yet, it was an absolutely engrossing encounter. There was great physicality, great honesty on offer and considering the conditions, 3-12 to 1-15 was a good scoring return.

Coolderry led by 0-3 to 0-2 after ten minutes but St Rynagh's took the initiative with a 12th minute goal from Niall Wynne after Sean Dolan's shot was saved by Stephen Corcoran – Rynagh's goalie Conor Clancy had made a fantastic 2nd minute save to deny Conor Molloy. That goal separated the sides in the first half and without doing anything special, St Rynagh's were full value for their 1-6 to 0-5 interval lead.

The second half was much improved with more scores and both sides showing greater work rate and intensity. Niall Wynne almost got in for a goal but Luke O'Connor made no mistake in the 35th minute when he raced clear of the Coolderry cover and dispatched it to the net. Niall Wynne got his second goal in the 44th minute and a 3-8 to 0-9 lead looked like it would be more than enough for Rynagh's.

Coolderry did very well to get back into it from here, They were 3-9 to 0-10 behind in the 46th minute but then got four on the trot, two from Brian Carroll frees and one each from Kevin Connolly and Kevin Brady to make it interesting. A Gary Conneely point settled St Rynagh's but Carroll got a free and then rattled home that 56th minute penalty after Kevin Connolly was fouled.

Suddenly there was only a point in it and Rynagh's were forced to respoond. They did so with those two O'Connor frees but it was a lot tighter than they could have expected with fifteen minutes left.

On a day when a number of players were not at their very best. St Rynagh's owed a debt of gratitude to midfielder Joe O'Connor, flying forward Luke O'Connor and two goal hero Niall Wynne, who is finding his best form after coming back from injury, for their win. Coolderry will still expect to be in the semi-finals but they lost here because they were too reliant on Brian Carroll and Kevin Connolly up front. Carroll got 1-10, three points from play while Connolly popped over three points and that left sparse returns for the remainder.

Joe O'Connor (St Rynagh's): Joe O'Connor ran the midfield battle for much of this game. He showed great pace, worked hard and was very composed on the ball. O'Connor drifted out of it a bit in the closing quarter before finishing strongly when he was needed.

St Rynagh's third goal was a work of art. The build up involving Luke O'Connor and Gary Conneely was breathtaking, the finish by Niall Wynne sublime and it gave St Rynagh;'s a 3-8 to 0-9 lead and ultimately the cushion to get home.

The conditions made it difficult to referee and Kieran Dooley let it run as much as he could. In those conditions, there were always going to be debatable decisions but he handled it fairly well. He could have given Dermott Shortt a penalty near half time but was unsighted while Coolderry also had appeals in the second half. He showed cards to keep control but didn't suffer fools gladly and wasn't taken in by players going down softly.

Dressing rooms are still not permitted for teams and while the GAA is priviliged to be going ahead, it is very hard on teams and players. It wasn't nice here to see players getting wet during their half time talk,

This was a challenging double bill for Birr to host as they were hurling themselves in Tullamore. They deserve credit for the way they managed it, getting in help from neighbouring clubs while several of their own members stayed back to make sure it ran smoothly. Their pitch cut up a bit in the second game but the weather did deterioriate. Birr hosted this very well.