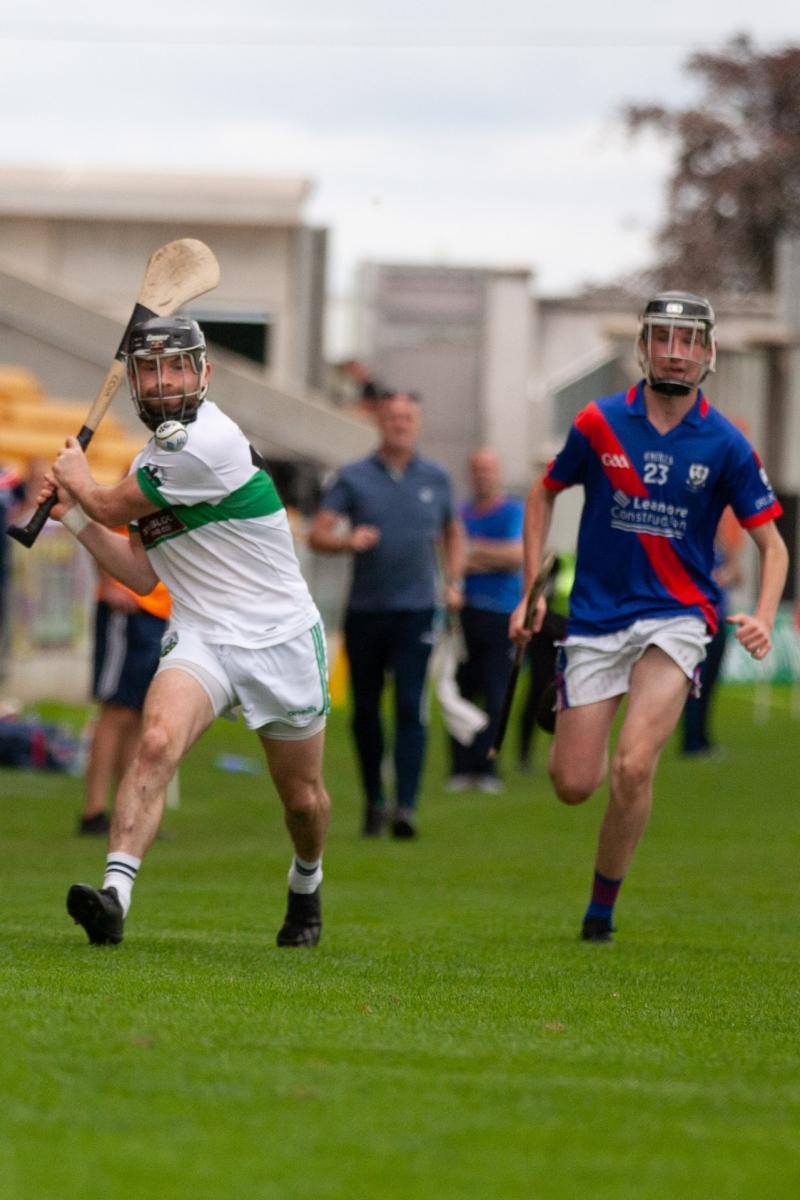 Colm Coughlan was on song for Kinnitty again.

KINNITTY collected two absolutely crucial points when they had just enough in the tank to hold off late Seir Kieran rally in a closely fought Senior Hurling Championship round 3 battle in Birr on Sunday afternoon.

Kinnitty were marginally the better side over the hour plus and deserved to win but they could very easily have been caught by Seir Kieran at the end.

In a typically uncompromising and hard hitting local derby, this was not a game for the purists but there was more than enough here to hold attention as it went down to the wire.

Kinnitty had first use of a strong wind and took their time to settle. They were behind 0-4 to 0-3 after fifteen minutes but finally clicked into form in the second quarter. Colm Coughlan got four points, all from placed balls and James Hardiman got a fine score from play as they went into a 0-8 to 0-4 lead. Kinnitty still held that gap at the interval, 0-11 to 0-7 and with the wind to come, Seir Kieran had every chance.

Kinnitty should have killed the game off before the break but Odhran Kealey's tame goal shot was saved by Peadar Murray and Tommy Leahy sent the rebound wide.

Seir Kieran got three of the first four second half points to cut the gap to two points, 0-12 to 0-10. It looked like the momentum was with them but Kinnitty were able to keep the scoreboard ticking over. Once again Colm Coughlan's scores were instrumental and he got two frees and one from play as Kinnitty led by 0-16 to 0-11 with seven minutes left.

The winners were in control but Seir Kieran got back into it when Eanna Murphy blasted a 58th minute penalty to the net after Adrian Hynes was fouled. Sub Emmet Scully was sent off with a straight red card after a clash with a Kinnitty player but Seir Kieran were still in sniffing distance.

They got a 21 metre free two minutes into injury time but Joe Bergin opted to tap it over the bar and bring the gap down to a point. He probably should have went for it and Kinnitty won the puck out, getting a free that Coughlan tapped over to secure the win.

It was a crucial win for Kinnitty and now puts them on four points. While they technically have a chance of a semi-final place, the big thing for Kinnitty this year is to stay up. They have now beaten the other big relegation contenders, Drumcullen and Seir Kieran and Kinnitty are now in bonus territory. It was a solid, hard working display by them with Willie Molloy and Paddy Delaney immense in defence.

Seir Kieran are in trouble. They have lost three out of three and look to be heading for the relegation play off. They fought hard here without really convincing and their backs are now to the wall.