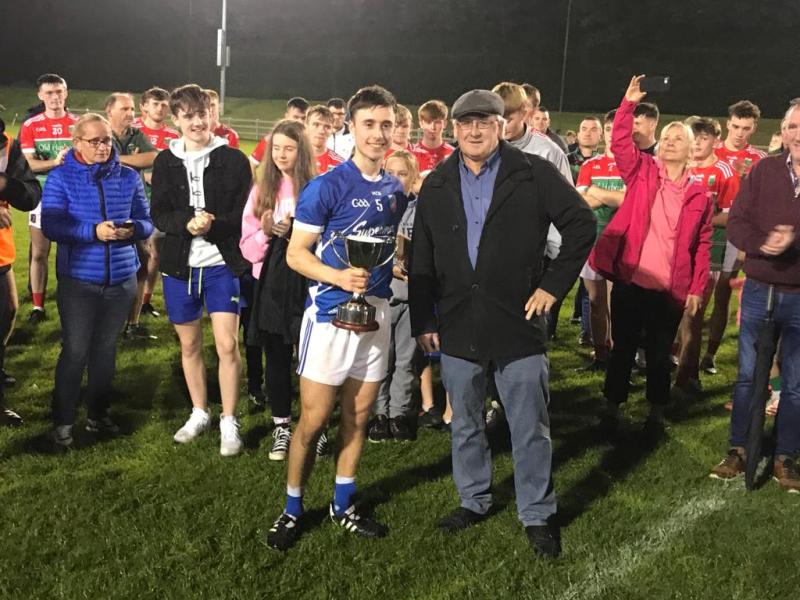 THE pre-game impression that Tullamore were absolutely unbeatable at this grade in Offaly proved to be entirely accurate as they demolished their parish neighbours Durrow in a one sided 2020 Tullamore Court Hotel U-20 Football Championship final in Tubber on Tuesday evening.

It was a supreme performance by a genuinely exciting, exhilarating group of footballers. The final scoreline of 3-13 to 1-1 says it all but this performance and win can be really put into perspective by the fact that Tullamore were missing two of their A list footballers, John Furlong and Oisin Keenan-Martin.

The defensive duo were outstanding on the Offaly side that won the All-Ireland U-20 football title a couple of months ago but Tullamore didn't notice their loss. Daire McDaid came into the heart of their defence in place of Furlong and held the centre quite magnificently, showing great composure on the ball. We are in the realm of speculation here but Tullamore would probably have been another 10% better with Furlong and Keenan-Martin on board.

In over thirty years of reporting on Offaly GAA affairs, this Tullamore squad are the best U-20/21 club side I have seen in the county. Only a couple of the great St Michael's sides that won five in a row U-21 football titles in a row from 2002 to 2007 are fully comparable while Ferbane and St Vincent's (Daingean parish) also had excellent teams in the past decade as they won a few titles. A young Niall McNamee was the star figure on many of these St Michael's teams and some of the best county and club footballers in Offaly were stalwarts on them – Niall McNamee, Brian Darby, Niall Darby and Shane Sullivan have five U-21 medals along with others while the Rhode parish outfit also won three in a row from 2011 to 2013.

They were a great side, especially when McNamee, the Darby's etc were close to the right age. It is difficult to compare teams from different eras but this Tullamore side does look to have taken things to a different level again. They have it every way with individual brilliance and flair combining very well with collective excellence, honesty and work rate.

It made for a really captivating mix and while this was in no way a competitive final, Tullamore's performance made it all so worthwhile. The pace and movement of their team just took the breath away, their work ethic and volume of turnovers, even when the game was well and truly in the bag, commanded the utmost of respect. It was a really special performance by a truly special team.

It is also worth noting that Tullamore did not operate in fifth gear for the whole hour. There was a spell in the second half when they went back to third gear and got a bit sloppy but their superiority and victory was never under threat. The statistic that only Shane Enright, Ciaran Burns and Diarmuid Egan from their starting fifteen is overage for this year's 2021 competition is a frightening one for every other team – and two of their replacements may be John Furlong and Oisin Keenan-Martin.

You had to feel sorry for Durrow. They gave it everything they had on the evening and they were clearly up for the game, tearing into Tullamore with everything they had in the opening minutes. However, it soon became apparent that Tullamore were in a different league and from an early stage Durrow were on a damage limitation exercise. Their 1-1 tally and a solitary score from play does not reflect well on them but credit for that has to go to an excellent Tullamore defence.

Tullamore started superbly with a Michael Fox point followed by a Luke Egan goal after he was left all alone inside the Durrow cover after they lost the ball as they tried to work it up the left sideline. Durrow hit back immediately with a super Kevin McDermott goal after he blazed past Ciaran Burns and buried the ball in the fourth minute.

For a few minutes, it looked like Durrow might make a contest of it. A McDermott mark in the 13th minute left them trailing by 1-3 to 1-1 but sadly it was all downhill for them after this. Amazingly Durrow didn't score again and that was the most disappointing aspect of the evening for them – they should have got a few consolation points in the second half but McDermott was off target with a couple of frees and other chances went abegging.

Durrow were in trouble by the 20th minute as five points without reply had Tullamore 1-8 to 1-1 ahead. The pace, flair and ingenuity of Tullamore's play tingled the senses in this period and a Diarmuid Egan goal after a fantastic length of field move gave them a 2-8 to 1-1 interval lead.

Tullamore did not play with the same intensity in the second half but they didn't need to and they were always in control. The inform Harry Plunkett got three points, two frees, before corner back Shane Enright got in for a 42nd minute goal.

Tullamore only scored two further points and they seemed content with that. They had no desire to punish opponents who couldn't catch them in a month of Sunday's here and had they been ruthless and really went for the jugular, they probably could have ran in half a dozen goals or more.

It was a super team performance by Tullamore with no sign of a weak link anywhere. Some of their less known players stood up to be counted with Daniel Fox brilliant in attack and top quality displays from Michael Feeney, Jay Sheerin, Daire McDaid, Ciaran Egan, Harry Plunkett, Luke Egan, Michael Fox and Diarmuid Egan – county U-20 sensation Cormac Egan also played well without going at full tilt.

There was no shame in defeat for Durrow. They tried hard, they worked hard and they were beaten by a serious force of nature, who would hold their own in club senior football in Offaly. Mark Troy in the opening quarter, Brian Duignan and Kevin McDermott were among their better performers but deep down, Durrow knew from the start that there would be no shock win here.

Harry Plunkett (Tullamore): Several contenders and all on the Tullamore side. You could make a case for any of a half dozen players but Harry Plunkett and Daniel Fox were two stand out contenders. Fox was sensational for Tullamore. He scored four points from play, displayed fantastic pace and a great work ethic, on and off the ball. Plunkett just edges it – he was quiet enough as the second half wore on and gave a couple of careless passes but he was immense in the first half and in spells after that. He got five points, two from play, helped Tullamore lord the midfield section and the three points he got after the break really put it to bed. Plunkett has a languid style about his football but don't be deceived by that – he is not lazy, he gets through the work, his movement with the ball in hand and distribution were great assets to this Tullamore team.

Tullamore's second goal in the 28th minute showcased all that is good about this team. Kevin McDermott was crowded out as he tried to make inroads in the Durrow attack, Tullamore broke up field at lightening pace, transferring the ball through a few hands before Diarmuid Egan blasted to the net.

Basil Cronin had a very good game. He was fair and consistent in his decision making. Michael Fox probably should have got a penalty just on the stroke of half time after he was pulled back but the referee may have got caught with the floodlights. It was an easy game to referee between two sides intent on playing football and he did well, talking to the players and letting them know when they strayed near the line.

The excellence of this Tullamore side, their flair and pace.

Tubber were exemplary hosts as usual. Their pitch was very good and they clearly took great pride in hosting this final. They had loads of stewards and managed the large crowd and traffic very well on a busy main road.

That concludes this campaign for both sides but both sets of players have plenty of action with other teams in the coming weeks.