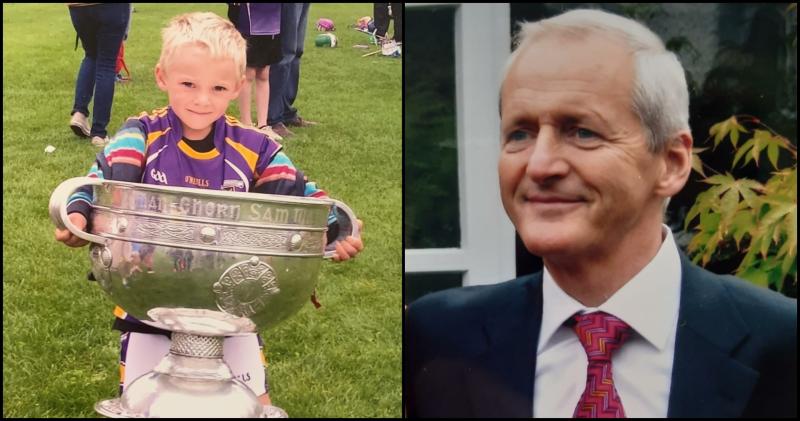 50 years on from when it was first delivered to Offaly by the 1971 senior footballers, the Sam Maguire cup will return as part of a fundraiser inspired by one of the men on the pitch that day, Paddy Fenning.

The Sam Maguire Cup will be present for this Sunday’s Paddy Fenning Walk as the 50th anniversary of Offaly’s first All-Ireland win is marked.

Willie Bryan and Tony McTague, respective captains for Offaly’s 1971 and ‘72 All-Ireland wins, will together carry the famous trophy on the last leg of the 5km walk, 50 years to the day since that landmark final victory over Galway.

The walk, which will start and finish at Tullamore GAA Centre, is the culmination of almost two years’ work by the committee assembled by Paddy Fenning once he was diagnosed with motor neurone disease (MND) in 2019. Sadly, he succumbed to his illness in May of last year.

Introduced as a substitute during the 1971 All-Ireland final, Paddy was a regular as Offaly retained the title the following year and played for the county up to 1980, also winning four Leinster senior titles. Outside of football, he was a force of nature in fundraising terms, spearheading campaigns to deliver a swimming pool and arts centre in Tullamore as well as a CT scanner in the local hospital, among other things.

Paddy was also the brains behind the many reunions that the 1971/72 team held over the years and there’s a certain poignancy at his former teammates gathering in his name on the 50th anniversary of their breakthrough success though they have rallied behind the cause brilliantly, with Martin Furlong and his wife Katie flying in from their New York base this week especially for the event.

Once receiving his diagnosis, Paddy set about raising €150,000 for MND research and support services, from which he benefited considerably in the final months of his life, as well as local homeless causes. The fund passed the €100,000 mark during the summer and organisers are hopeful that there will be a big push this week ahead of Sunday’s walk as they continue to make inroads on the €150,000 target, with many sponsorship cards still in circulation.

The walk was initially due to take place on June 7 last year though the Covid-19 pandemic forced its postponement. It will start this Sunday at 11am at Tullamore GAA Centre before moving towards the town and then along the walkway on the banks of the Grand Canal before looping back to the Tullamore GAA Centre, where the draw will be made with a number of top prizes on offer.

Walking the 5km route will take about one hour though participants are free to run or jog the course also. All are welcome to take part.

Following the walk, Offaly GAA will honour members and representatives of the 1971 panel and their partners with a drinks reception and meal at the Bridge House Hotel on Sunday afternoon.

Joe Stewart, chairman of the Paddy Fenning Walk organising committee, commented: “We’re looking forward to what should be a terrific event this coming Sunday and the presence of the Sam Maguire Cup adds to it greatly. It’s been a long process due to the pandemic but with the public health picture now much clearer, we would hope that people will turn out in strong numbers in what will essentially be a celebration of the remarkable life that Paddy lived. It’s also an opportunity to pay homage to him in a way that people simply couldn’t last year given the restrictions that applied at the time of his funeral.

“As a committee we’ve been encouraged by the increasing flow of sponsorship cards and donations as the walk has drawn nearer and we expect that that will intensify in the coming days. We would ask, respectfully, that those who have sponsorship cards endeavour to get them filled and returned to us in the coming days, though we will be accepting cards and donations on Sunday also. Alternatively, contributions also can be made via our website, paddyfenningwalk.com.”

What is the time difference and where can I watch the Ryder Cup?