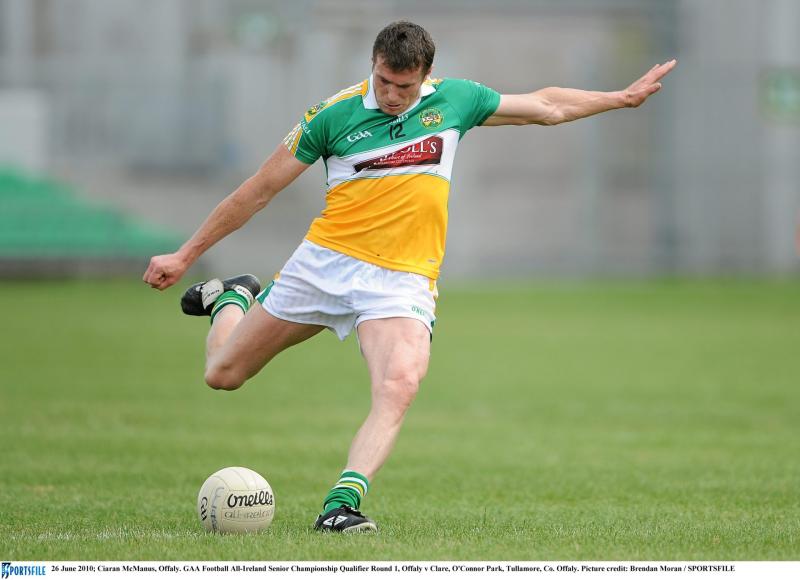 THE Offaly Senior “B” Football Championship moved into the knockout stages on Sunday afternoon when the final round of group fixtures took place.

Tubber were the happiest team, snatching a semi-final spot from group one after a hard earned but deserved 1-13 to 1-9 win after a pulsating game against Erin Rovers in Durrow.

Championship favourites, Clara were already assured of a semi-final place from group 2 and the real drama surrounded the battle for the third qualifying spot – Ballycumber came second in the group and St Rynagh's took third place by their finger tips, edging out Ferbane on scoring difference.

In group 1 Walsh Island finished second with Erin Rovers third – scoring difference decided the placings. It means that Walsh Island will play St Rynagh's in the quarter-finals while Ballycumber will meet Erin Rovers in a mouth watering parish derby. The quarter-finals will take place on the weekend of October 2 and 3 and there will then be an open draw for the semi-finals but with the two group winners kept apart. The relegation play off is between Gracefield and Ferbane.

Clara were dismayed to be relegated from senior last year and have been clear championship favourites from the start. They have confirmed that ranking with three wins from three and they wound down their group with a comfortable 3-11 to 1-8 win over St Rynagh's. It left Rynagh's, last year's intermediate champions, on tricky ground but as expected, Ballycumber did them a favour in Durrow, beating Ferbane by 0-15 to 0-7. This left St Rynagh's and Ferbane on one point each as they drew their meeting but Rynagh's advance because their scoring difference is -12 points compared to -25 for Ferbane.

There were big, crucial wins for Tubber and Walsh Island in group 1. Walsh Island played Gracefield, knowing that a defeat would likely put them out but they did very well to win by 2-12 to 1-12. Walsh Island have really performed to their potential this year. They led by 2-6 to 1-7 at half time and were able to stay in front in the second half. It condemns Gracefield to the relegation play off and that is a quite shocking predicament for the Laois border club. One of Offaly football's iconic names, they were beaten by Durrow in the senior “B” final last year, having been relegated from senior in 2019. They will be favourites to beat Ferbane but even if they do, it still represents a dramatic slippage for Gracefield.

Tubber and Erin Rovers served up a very enjoyable game in Durrow, with a particularly engrossing second half when there were plenty of twists and turns. The first half was a mediocre enough affair with plenty of mistakes and a general lack of urgency as Tubber led by 0-6 to 0-4 at half time. The border club played much better at the start of the second half, extending their lead to 0-9 to 0-4 and Erin Rovers were in trouble.

However, a superb goal from wing back Steven Buckley brought them back into it and they later got to within a point. Both sides missed chances but Tubber found their form again in the closing quarter. A clinically taken goal from Patrick Farrell gave them a 1-10 to 1-6 lead at the second half water break and they always looked like winning from here. They stayed four points in front for most of the remainder and while Pullough men fought to the end, Tubber defended well and retained possession to frustrate the losers.

The Tubber team featured an Offaly football star from the 1990s and 2000s. A Leinster SFC, National Football League medal winner in 1997 and 1998 and a superb compromise rules player for Ireland, Ciaran McManus lasted the distance at midfield for them here. Now in his mid 40s, McManus returned to training with Tubber this year after returning from working in the USA and he soon went back training with Tubber. He did his bit here, scoring an excellent point on the stroke of half time and winning a lot of ball in the second half. McManus had conserved his energy well in the first half but he did nothing of the sort in the second half as he drifted back to help out his defence and sent in some good ball to the forwards. He did make a couple of mistakes but he did very well in what was a very solid, satisfactory Tubber display.

Bernard Allen and Nathan Poland scored well for the two sides but Erin Rovers flattered to deceive a bit. They looked very useful at times but ultimately didn't play well enough for long enough and they had no complaints at their defeat.