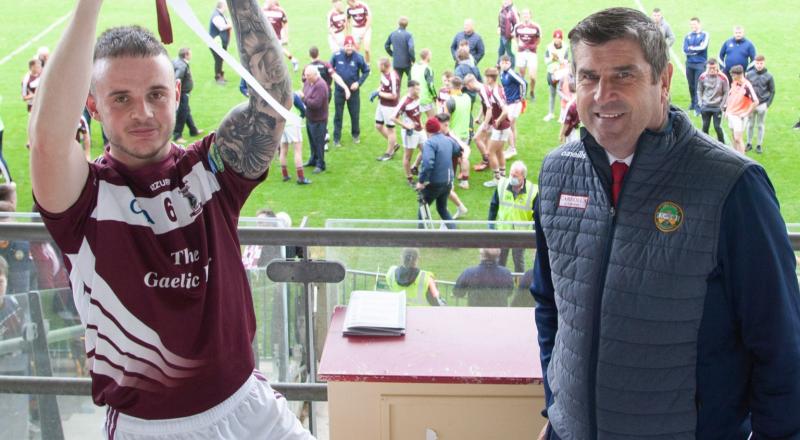 THERE was plenty of drama in the final round of the Offaly Intermediate Football Championship group stages on Saturday evening with Clodiagh Gaels the big winners and Ballycommon very definitely the big losers.

Clodiagh Gaels did exceptionally well to top group 1 and join the group 2 winners in the semi-finals while the big losers were Ballycommon who head to the relegation play off after defeat to a fast improving Raheen outfit.

Group 2 had been done and dusted before the final round with last year's junior champions Daingean assured of top spot and a semi-final, Clonbullogue and St Brigid's guaranteed the two quarter-final positions and Kilcormac/Killoughey in the relegation play off, irrespective of results.

Despite that, the very one sided nature of the two games there came as a surprise. Daingean had a run away 4-18 to 0-6 win over a Kilcormac/Killoughey club, whose approach to this championship has been little short of shocking. Beaten by St Rynagh's in the final last year and not far away from a win, they made no impact whatsoever. They were resoundingly beaten by Clonbullogue and St Brigid's in their first two games and hit rock bottom with the mauling by Daingean – they trailed by 4-9 to 0-3 at half time and will be favourites to drop down to junior in the relegation play off against Ballycommon: a championship that they could win at a canter next year if they give it any go at all.

The big surprise of the night was the scale of St Brigid's 1-18 to 0-2 defeat by Clonbullogue. The Croghan men had looked to be going okay, easily beating K/K and running Daingean close but no matter what extenuating circumstances they may have had, a defeat of this nature and only scoring two points does not augur well for their prospects.

The real drama was reserved for group 1 where the four teams were tied on two points each going into the game and it was poised on an absolute knife edge. The big winners were parish neighbours Clodiagh Gaels and Raheen while a mightily relieved Shannonbridge scraped through by the skin of their teeth.

Clodiagh Gaels had a very good 2-11 to 1-11 win over Shannonbridge. They led by 0-6 to 0-5 at half time, took control in the second half and then held on for the win. Their reward was a big one, a semi-final place – the Killeigh-Killurin outfit tied with Raheen on four points on the top of the table but went through on the head to head rule as they surprised their neighbours in the first round.

Shannonbridge managed to scrape into the semi-finals on the head to head as them and Ballycommon finished on two points but Shannonbridge had defeated them in the first round.

It was a devastating defeat for a fancied Ballycommon side, who had been beaten in the semi-final last year and have been knocking on the door of this championship for some time. They could have no complaints at their 2-11 to 1-10 defeat by a Raheen side who have improved significantly since their first round reverse against Clodiagh Gaels and are now motoring very nicely.

With Edenderry senior footballer Richie Dalton at the helm in Raheen, they have developed into genuine title contenders and they looked good in their win against Ballycommon. They were outplayed early on and would have found it very difficult to come back had Gareth Mann put away a goal opportunity and Ballycommon took all their chances in the first quarter. The game swung in Raheen's favour when Jack Keogh got in for a goal and the Geashill based club led by 1-6 to 0-5 at half time.

Ballycommon's prospects had nose dived just before the interval when their best player Conor Dunne went off injured. Dunne had caused Raheen extreme problems in the first half with his pace, movement and direct running. He scored four of their five first half points, two of them from play and with him on the field, Raheen would have found it a lot more difficult in the second half.

As it was, Raheen were able to exert an almost understated grip on proceedings, dominating most sectors, playing composed pacey football and attacking very well. Dylan Hyland's return from Australia has helped rejuvenate Raheen football and he was in outstanding form here, scoring seven points, three from play. Hyland was man of the match and with Conor Carroll, Paddy Rigney and Brian Crombie also impressing in their attack, they won because they had the better forwards.

Chris Kenny, a son of former Offaly footballer John Kenny had brought Ballycommon back into it with a goal but a superb opportunist 44th minute goal from Paddy Rigney gave Raheen a 2-9 to 1-7 lead and they were able to get home from here. They were never comfortable as Ballycommon stayed alive until the end and Ian Scally, Stephen Conneely and Gareth Mann all got good points for them but on the day Raheen were definitely the better side and deserved to advance.

There is still no clear favourites for this championship as most teams look capable of beating each other. The nature of St Brigid's defeat against Clonbullogue means that they are now outsiders but they can't be fully ruled out and any of the other teams have realistic prospects. Clodiagh Gaels and Daingean may have topped the two groups and Shannonbridge won this competition just a short few years ago but the form of Raheen and Clonbullogue is compelling and it is shaping up to be a very competitive, interesting championship.