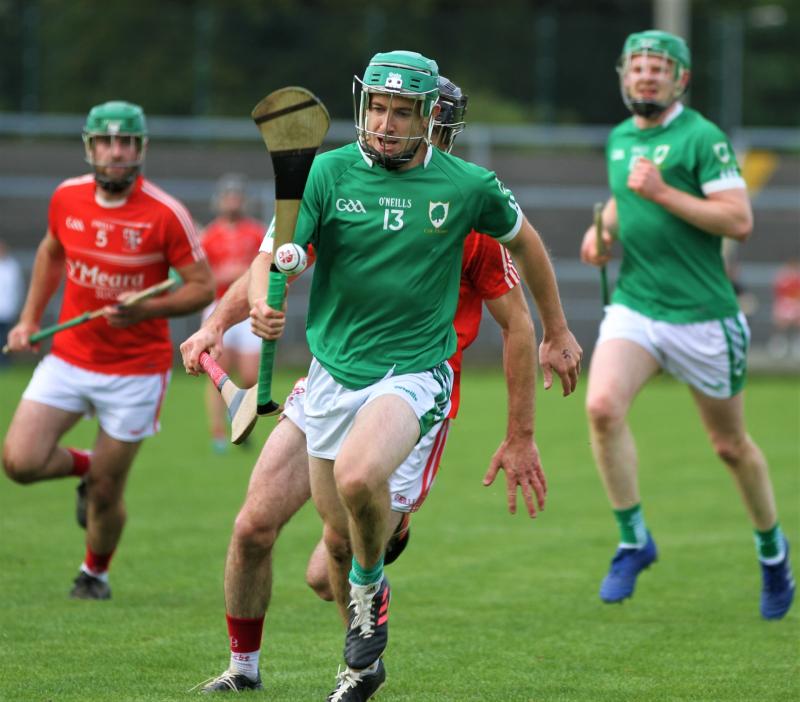 Kevin Connolly runs at the Shinrone defence for Coolderry.

THE cream has quickly risen to the top in the Offaly Senior Hurling Championship with the four pre-season favourites taking pole position in the race for the semi-finals.

With two rounds played, Kilcormac-Killoughey, Birr, Coolderry and St Rynagh's are out in front with two wins each and four points – K/K's scoring difference is +23 points, followed by Birr on +19, Coolderry on +12 and St Rynagh's on +10.

They are followed by Shinrone (+7) and Kinnitty (-2) on two points while Ballinamere (-11), Belmont (-13), Drumcullen (-16) and Seir Kieran (-28) are without a point. It is more or less what we would have expected at the start of the season with only Shinrone and Ballinamere given a realistic chance of putting one of the top four out.

Shinrone are still alive and kicking but need big performances to get through. They will really need to win their remaining three games and while they will be favourites to take Kinnitty, they will also have to beat at least one and probably both of Kilcormac-Killoughey and Birr. Kinnitty are in the same position but it will be a major surprise if they come through. They have lost to St Rynagh's and beaten Drumcullen – They have to play Belmont, Shinrone and Seir Kieran and while they might be slight favourites against struggling Seir Kieran, the odds are stacked against them.

It is a championship with a difference this year. The ten teams are in two groups of five and they play the teams in the opposing group. The four teams with the best record go into the semi-finals and this makes it really interesting.

Group 1 consists of Kilcormac-Killoughey, Birr, Coolderry, Ballinamere and Kinnitty while group 2 is St Rynagh's, Belmont, Shinrone, Seir Kieran and Drumcullen. On paper, the group 1 teams have marginally the easier run of fixtures, even if the champions and favourites, St Rynagh's are in group 2.

With three rounds left to play, almost every team can still get through but it is difficult to envisage any of the teams without a point making it into the semi-finals. The big casualties here are Ballinamere, who were very close to St Rynagh's last Sunday. They were level going into injury time before losing by 1-18 to 0-19. A famous win was within touching distance for them but the real damage was done for them as they didn't perform in their first round defeat by Shinrone. While it could have happened on Sunday, a win over St Rynagh's was always a long shot and Shinrone was a game they simply had to take.

Ballinamere will be warm favourites to beat Drumcullen in round 3 and with games to come against Belmont and Seir Kieran, they certainly have a chance of getting onto six points. The other round 3 fixtures are: Birr v Belmont, Coolderry v St Rynagh's, Kilcormac-Killoughey v Shinrone and Kinnitty v Seir Kieran.

It is possible for a team to qualify on six points but they will be relying on other results. Suffice to say that it is knockout from here on for Ballinamere, Belmont, Drumcullen and Seir Kieran and the losers of Ballinamere and Drumcullen in the next round will be gone. While Shinrone and Kinnitty have two points, this is also very close to a knockout game as the losers will have a mountain to climb – Shinrone have Kilcormac-Killoughey and Birr to come and a defeat by Kinnitty is likely to break their morale.

While there is a lot of margin for error for teams, it is a very entertaining championship. Last week's results went as expected. St Rynagh's may have been pushed to the wire by Ballinamere but they still won. Birr have shown excellent form to date and they had an impressive 0-25 to 1-13 win over Seir Kieran, with Eoghan Cahill, back from injury, scoring sixteen points. Birr, however, have their two easiest games out of the way and a lot more will be revealed about them in their closing group fixtures against Belmont, St Rynagh's and Shinrone.

Kinnitty had a 1-20 to 1-14 win over Drumcullen but it came as a price as star forward Shane Kinsella was sent off and Paddy Rigney was carried off with what looked a bad leg injury.

Kilcormac-Killoughey produced a mix bag in their 1-16 to 0-16 win over struggling Belmont. Belmont failed to score from play and they were missing Oisin Kelly who is getting a scan on a knee injury this week. K/K played well in the opening twenty minutes or so but were mediocre after this and the jury is very much out on their prospects.

Coolderry continued their promising start with a hard working 1-18 to 0-19 win over Shinrone. Coolderry are motoring well but their next game against St Rynagh's will tell a lot.

A more complete picture of the likely semi-finalists will come into focus after round three on the weekend of September 25/26 but so far, the championship is going on expected lines and the presence of K/K, Birr, Coolderry and St Rynagh's at the top of the table at this stage would have been predicted by most observers.