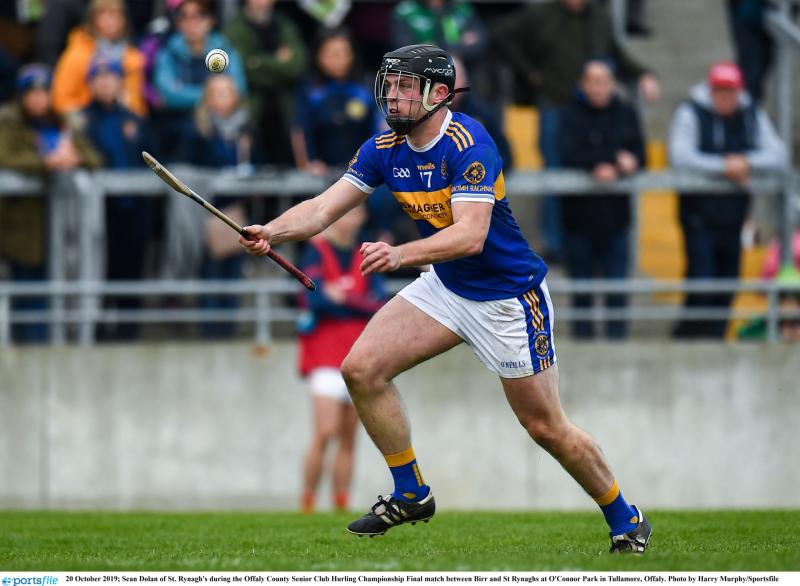 IT was almost a coming of age performance by a superbly brave Ballinamere side as they just lost out to champions St Rynagh's in a gripping Senior Hurling Championship round two thriller in Tullamore on Sunday evening.

While no one can argue with a St Rynagh's win, this was a very close run thing and it could have swung either way. Ballinamere played well enough to deserve a share of the spoils and a famous win was within touching distance for them.

It meant that they didn't quite come of age here but after a bitterly disappointing performance in their first round defeat by Shinrone, this was much, much better by Ballinamere. With four members of the Offaly senior hurling team on their squad, Ciaran Burke, Ross Ravenhill, Brian Duignan and John Murphy, they have a pool of talent that few can match. They need to start delivering now and despite the defeat, this was a significant step in the right direction for them.

The defeat stacks the odds against them claiming a semi-final place but Ballinamere can be very pleased with the way that they not only went toe to toe with the champions but sustained the pace and lasted the distance right to the end.

St Rynagh's have developed into a serious force of nature in the past couple of years. They might have been a small bit off the boil here but they were still up for this game and fought for everything. Despite scoring 1-18, their forward play was not as sharp as they would have liked. Their shot selection was questionable at times and they had plenty of wides, while Ballinamere were guilty of the same sins, especially when it came to wides – they didn't have the same volume as St Rynagh's but some of theirs were poor ones that they needed to convert.

It was a hugely entertaining game of hurling. There were some scrappy spells but it was compellingly honest with both sides emptying the tank. The individual battles were ferociously fought, there was plenty of excellent hurling, quality scores and it was a high octane encounter.

Ballinamere were level as the game went into injury time and a draw would have been a fair result but it was Rynagh's who got the crucial late points, both from the stick of Gary Conneely. Conneely had been on his game for the most part and he stroked over the two points, the second after a short puck out from Mark Troy, who was very solid in general play, missed its target and was intercepted – Ballinamere's tactic of short puckouts had a mixed result. It kept possession at times but not all of Troy's deliveries were executed as well as they could have been while other accurate ones weren't gathered by defenders and they were definitely a factor in the outcome here.

St Rynagh's won't be particularly happy with their overall performance and they will be highlighting their atacking play this week but the result was the bottom line and they remain firmly on course for a semi-final berth.

Ballinamere competed very well from the start and hit the ground running. They led by 0-3 to 0-1 after eight minutes and Conor Clancy made an excellent save to deny Mike O'Brien a goal. Rynagh's were ahead by the 15th minute and it was nip and tuck the whole way to the final whistle. Ballinamere paid a dear price for a couple of mistakes and St Rynagh's all important goal from Stephen Quirke came after one by Gerry Spollen in the 17th minute. Quirke's finish was superb and for a few minutes, Rynagh's looked like taking over.

They led by 1-7 to 0-5 after 21 minutes and should have pushed further ahead. Ballinamere rallied with great character. They almost got a goal in the 24th minute but it was called back for a free that Brian Duignan tapped over and at half time, they had it back to level terms, 1-7 to 0-10.

Ballinamere fully deserved that and they also started the second half very brightly. They got three of the first four points to lead by 0-13 to 1-8 and St Rynagh's were in trouble. Fortunes ebbed and flowed from here on. Niall Wynne came off the bench and got three great points for the winners, who had edged back in front, 1-11 to 0-13 by the 40th minute.

Ballinamere were back ahead, 0-16 to 1-12 by the 45th minute with Sean Duignan, John Murphy and Brian Duignan all finding the range. St Rynagh's got back in front with points from Aidan Treacy and Niall Wynne and the sides were level on three more occasions before those late Gary Conneely points.

It was heart warming to see such a competitive, honest game of hurling. Collectively, both sides worked so hard and there were great individual performances and battles. One highlight was the tussle with Ballinamere centre back, Ciaran Burke and Rynagh's centre forward Aidan Treacy. Both were excellent at times and it was probably honours shared, even if Treacy did do plenty of damage.

Gallant defeats are no good to Ballinamere now but they really did play well. Chris McDonald, David Magner, Ciaran Burke, the superb Ross Ravenhill, Brian Duignan, Sean Duignan and John Murphy all did very well for them and only for a few mistakes, they might have won this one.

Ben Conneely (St Rynagh's): It is a sign of a good game when there are several contenders and there were players who stood up to be counted on both sides. Chris McDonald, Ross Ravenhill and John Murphy had serious games for Ballinamere while Pat Camon, Aidan Treacy and Niall Wynne staked claims for St Rynagh's. The choice, however, is Ben Conneely. He was once again immense, inspiring all around him, winning all types of ball and clearing well. He marked Brian Duignan in the second half and came to grips with a player who had shaped up as a match winner in the first half.

The introduction of Niall Wynne at half time. Wynne had missed a lot of action because of injury and he will have been delighted to have got a good half hour plus. He also showed great sharpness and fitness, scoring three crucial points and causing a lot of problems for Ballinamere. His introduction was a pivotal moment as some of the Rynagh's attacking division were not as clinical as usual.

Noel Flynn showed his vast experience as he had an efficient afternoon. He used the advantage rule well though Ballinamere were upset that he pulled them back in the first half after the ball ended up in the net following a great Conor Clancy save from Kevin Mc Dermott– Flynn called it back for an earlier free and Brian Duignan pointed. Ballinamere's frustration was understandable but some referees are allowing advantage to run too long before giving the free. It needs to end earlier with either a free or play going on and Flynn made a snap judgement call – if the ball had been cleared, Ballinamere would have been looking for the free.

Ballinamere's performance. They have a fine array of young talent and they need to be competing now. A semi-final place may be beyond them this year but that is where Ballinamere have to be aiming for in the coming years. They have plenty of work to do but this was a big performance from them.

The O'Connor Park pitch held up very well for this second game. There is an issue, however, lately with neutral linesmen in O'Connor Park. A role normally fulfilled by official referees, a shortage means they aren't always available and some times, members of one of the competing clubs step in. That should never happen in O'Connor Park. There was annoyance among the St Rynagh's management here over an early Sam Bourke point. They argued that the ball had been out over the sideline and as manager, Ken Hogan protested, a steward, Brendan Troy came down out of the stand to do linesman. Even if official referees can't do the line – and ideally, it should be official referees wearing their gear running the line in O'Connor Park -, there should still be neutral officials and the County Board must provide them – they may have a limited number of loyal stewards but games in O'Connor Park must have every i dotted and t crossed.