Kilcormac/Killoughey hold on to beat Belmont in extraordinary game 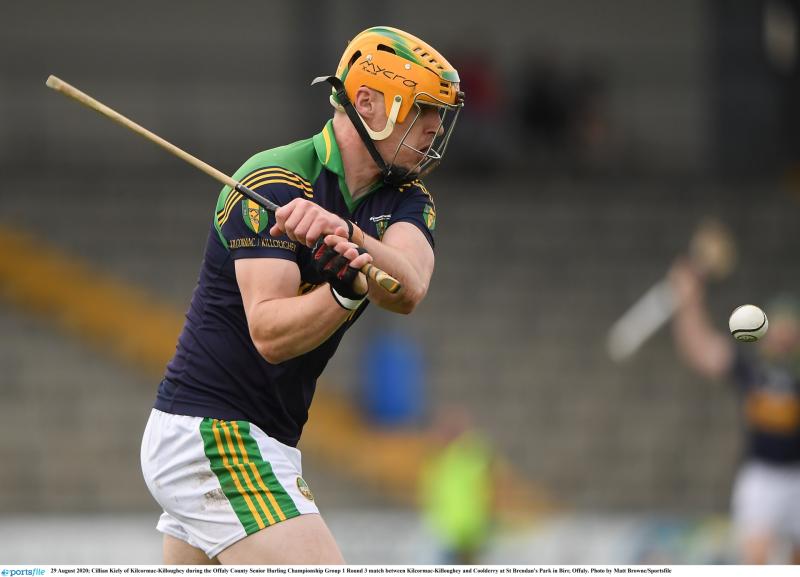 AN extraordinary game that raises way more questions than answers for both sides saw Kilcormac/Killoughey collect their second brace of points with a very hard earned win over Belmont in Tullamore on Sunday afternoon.

It keeps K/K on course for a semi-final place but this was a far from convincing display and they could very easily have been caught here. Belmont were missing the injured Oisin Kelly and failed to score a solitary point from play. That is a shocking and thought provoking statistic for them, yet K/K didn't put them away and ended up hanging on for dear life in the near 10 minutes of stoppage time that was played.

David Nally got fifteen poins, fourteen frees and one side line while Leon Fox split the posts with one long distance free as Belmont really cooked their own goose. Nally was very accurate but also had a few wides from frees while Belmont's attempts at scoring from general play left a lot to be desired. They relied very heavily on frees and when they did get clear chances, their shooting was very poor.

Yet they could have snatched a draw with Cathal Flynn almost getting through for a match saving goal right at the death. Belmont almost got qa goal as well 14 minutes into the second half when David Cox was unlucky to see his intuitive shot hit the post. K/K, however, did deserve to win. They had played the best hurling of the afternoon in the opening twenty minutes and they got a few decent scores from play.

It was a fairly disjointed performane by the winners and they won't be happy at the way they played. K/K were very good for the first twenty minutes when they really outclassed Belmont but it was a real struggle for them after this. They led by 0-4 to 0-1 after eight minutes, 0-8 to 0-2 and 0-9 to 0-3 after twenty minutes and they were full value for that lead. K/K played nearly all the hurling in that spell and Belmont looked an extremely mediocre side.

By half time, Belmont were back in it. David Nally got five frees to leave them trailing by 0-10 to 0-8 at half time and that scoreline in no way demonstrated how well K/K had played earlier in the half. Both sides had positively shocking wides in the first half, from play and frees. K/K had nine wides, Belmont 10 but K/K forwards had been the sharper of the two units.

Belmont were much better in the second half. They worked very hard, quickly closed down opponents and made life very difficult for them. K/K never really built up a head of steam. There was still two points in it, 0-12 to 0-10 when Conor Mahon blasted home a 38th minute goal after a long Conor Slevin free broke.

Belmont dug very deep after this. They were five behind, 1-14 to 0-12 as the game went into the final quarter and they did very well to get back into contention from here. They had the gap back to a point, 1-14 to 0-16 with three minutes of normal time left and K/K were living on their wits. The winners did knuckle down on this. James Kilmartin and Karl Guinan showed character to win crucial ball against the head and both led to frees that Cillian Kiely sailed over.

Lochlann Kavanagh was blocked with an easy chance for the insurance point and Belmont did threaten a late goal but a relieved K/K held on.

Best for K/K were Conor Leonard, Jordan Quinn, Damien Kimartin, Jack Screeney, Cillian Kiely, Conor Mahon, Karl Guinan and Lochlann Kavanagh. Leon Fox was immense in defence for Belmont while David Nally was a pivotal figure with his frees. Many others displayed a great work ethic with Colin Egan fighting for everything in the closing quarter but the abiding memory of this game for Belmont will be their failure to score from play.

Cillian Kiely (Kilcormac/Killoughey): Once again K/K stuck with the tactic of playing Cillian Kiely at wing forward and making sure he held his position. It worked well again. They worked a lot of ball through him and he obliged with ten points, three from play. He won all sorts of ball and used his physicality well to break tackles and set up team mates.

There is something very impressive about the way that Joey Deehan is developing as a hurling referee even if he is still a work in progress. Like any referee, he can make mistakes but he exudes confidence and this brushes off on the players. He controlled this game well and it was good to see him explain his decisions to players. He was aware of what was going on, often looking behind him when there was a possibility of something untoward going on. Another fine display by the Clara man who also spotted fouls that were not always obvious. He did take a while to make a decision after Jack Egan was upended in the 42nd minute. It was close to a shoulder and if it was a foul, it could have been a penalty but Deehan awarded a free in and booked Oisin Mahon, who protested his innocence. He did lose his way a small bit late on, throwing in three balls in a row over on the hospital sideline with too many players in close proximity and messy rucks developing. Ten minutes injury time was also a lot, though there had been a couple of stoppages and there were periods when there was very little hurling going on.

Belmont's failure to score from play.

O'Connor Park could not have been in better condition – a temporary scoreboard is still being used under the main one and while that is fine for the club season, it is something that will have to be addressed for big county games next year. On a different issue, it is unusual to see teams not perfectly attired in the modern game. Years ago, players wearing a variety of socks and togs was common place, not now but Belmont midfielder Jack Egan had a different togs than the rest of his team mates here. It isn't a big thing and there could have been a good reason for it but match presentation is important and it didn't look well.

Belmont play Birr in round 3 while Kilcormac/Killoughey have Shinrone.