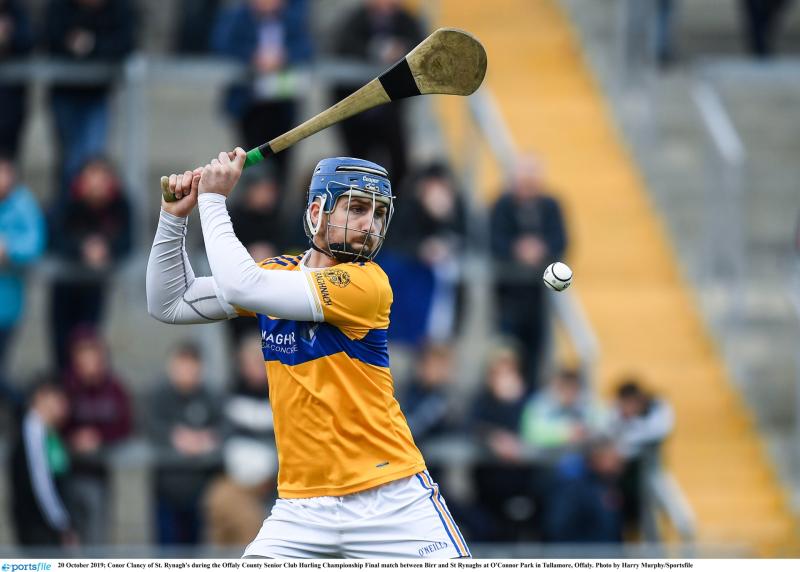 Fresh after winning the 2020 Senior Hurling Championship, St Rynagh’s powered to another impressive victory over Kinnitty in Birr on Saturday evening.

They led from pillar to post in a game which was mainly one way traffic. Kinnitty performed well at stages and did stay in touching distance for most of the first half, but St Rynagh’s were in control for the majority of the game and still looked like they had an extra couple of gears.

They have two points on the board tonight, and with the likes of Aidan Treacy and Sean Dolan to come back into the fray, they have serious firing power and based on today’s performance, they look like the team to beat already.

Conditions were perfect for hurling and it was played under a beautiful setting sun in St Brendan’s Park with the only complaints coming from both goalkeepers who had the low sun to contest with under a high ball.

Nonetheless, it still led to a decent game of hurling and it was the St Rynagh’s men who came roaring out of the blocks. They got the first four points of the game with Luke O’Connor opening the scoring from a placed ball before O’Connor, Niall Wynne and an Aaron Kenny point gave them an early advantage.

Colm Coughlan opened Kinnitty’s account for the day through a free but St Rynagh’s pushed on and got the next four on the bounce courtesy of O’Connor again, Dermot Shortt, Ben Conneely and another Kenny free had them back in control.

When Aaron Kenny put St Rynaghs’ 8th point of the day over the bar, it looked as if they would push on and pull away but Kinnitty pulled themselves back into it.

Aaron Browne latched onto a loose ball on the ‘14’ and he buried low past Conor Clancy.  Jason Armstrong added a point soon after to reduce the gap to just three points. Stephen Quirke and Colm Coughlan traded points for their sides to leave it a three-point game at the first water break.

St Rynagh’s gained the upper hand somewhat in the second quarter. Stephen Quirke and corner back Stephen Wynne pointed to increase the lead but Kinnitty restored the gap to three through two Odhran Kealey frees.

Just before half time, Aaron Kenny had the ball in the net with a neat flick past James Dempsey. However, referee Adam Kinahan raced in and upon consultation with his umpire, he awarded a free in to St Rynagh’s which Kenny took and tapped over the bar. It was a strange decision but Rynagh’s ploughed on and two more points from Quirke just before the half time whistle left it a six-point game at the half time break.

Kinnitty were still in with a shout after the half time break, but they were now on their third different free taker after injuries to Colm Couhglan and Odhran Kealey, a huge blow after losing Shane Kinsealla before throw in. It was one way traffic for much of the second half, with Luke O’Connor, Quirke and Stephen Wynne all tapping over frees at their ease as the Kinnitty storm looked to have died down considerably. The gap at the second water break was nine points, but St Rynagh’s were in complete control.

It did not get much better for Kinnitty in the fourth quarter and although they did battle right to the end, St Rynagh’s were just too strong. They had spare men all over the field and the Kinnitty legs seemed to just give way. Kenny, Simon Óg Lyons and O’Connor all pointed for the St Rynagh’s men.

Kinnitty kept plugging away and points from Eoghan Callaghan, Danny Flanagan and Jason Armstrong ensured St Rynagh’s did not run away with the game completely.

Kinnitty won a ‘21’ yard free late on and goalkeeper James Dempsey came up, but his powerful shot was well saved from the line of St Rynagh’s defenders on the line. In a way, the penalty somewhat summarised the game for Kinnitty as there was just no way past the St Rynagh’s wall. It was a decent performance for their first game back in ‘Senior A’, but a mountain to climb if they are to have any say in the Championship later on. Nonetheless, a thoroughly deserved victory for the blue and yellow as they powered home to an eight-point victory.