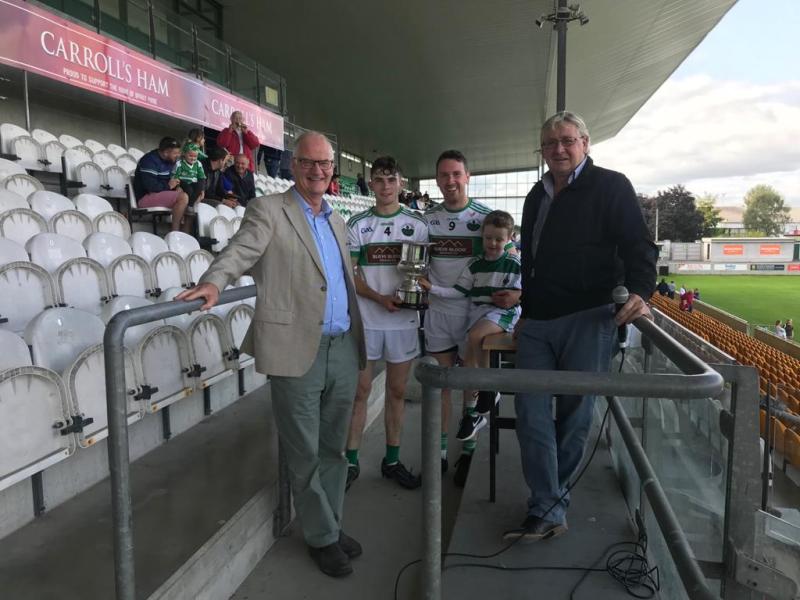 KINNITTY got on top in the second half to pull away for a fully deserved win over neighbours Drumcullen in the 2020 Offaly Senior “B” Hurling Championship final in Bord na Mona O'Connor Park on Sunday afternoon.

They were clearly the better side in the second half, getting on top in most sectors but this was not a clearcut win and they were forced to go at full tilt by a brave and battling Drumcullen.

Kinnitty did have the title in the bag from a distance out but it was only in the closing ten minutes that they really got into a comfort zone. They were 0-16 to 0-9 ahead as the game got into injury time and a point and goal from Colm Gath frees gave Drumcullen a brief chance of a late snatch and grab raid. Gath's free, blasted in from 25 metres, came over two minutes into injury time and was too late for them – though more than a minute was played after it and the door was open.

Anything other than a Kinnitty win, however, would have been an injustice and they were the better team. The sides had been level at 0-7 each at half time but Kinnitty outscored them by 0-9 to 1-3 in the second half when they had the lion's share of possession.

With both sides already assured of top flight hurling this year, any suggestion that this would lack the usual cut and thrust of a final were well wide of the mark. Both sides were full blooded in their commitment and hurling, tearing into each other and hitting hard. Drumcullen put in some heavy hits in the first half but Kinnitty were no shrinking violets and it all made for compelling viewing. It was tough and uncompromising but both also produced some very good hurling, taking some fine scores. Drumcullen could have been closer at the end – Conor Gath and Colm Gath both missed frees that they would expect to convert and they couldn't afford those wides. 1-10 was not a high enough tally and while Drumcullen's commitment and appetite for battle was commendable, there was enough here to suggest that they will find the going tough in senior hurling.

Kinnitty were a bit better than them but they are not on the short list of contenders for the Sean Robbins Cup. Once again Colm Coughlan's free taking was crucial for Kinnitty – he got ten points, nine from placed balls and had only one miss while he also made some nice passes in general play. With James Dempsey imperious in goals, Paddy Rigney, Paddy Delaney and Willie Molloy impressed in their defence. Kinnitty's win was fashioned on a work ethic with Shane Kinsella improving in the second half while Odhran Kealey also impressed in their attack.

Drumcullen can be proud of the way they performed. They weren't expected to be in the final at the start of the campaign last year but they came up on the rails and returning to senior was a big achievement for them. Staying up is their big priority this year and they won't be too down over losing this. Padraic Guinan was their best player, spraying quality ball around while Donal Guinan, Raymond Gath, John Cashin, Mark Kennedy jnr, Colm Gath, Conor Gath and sub Sean Kinsella impressed at different stages.

The teams could not have been any more evenly matched in a fiercely fought first half. Drumcullen came out of the blocks like a train and had points on the board through Colm Gath, Conor Gath (free) and Padraic Guinan before Kinnitty knew what hit them.

They led by 0-4 to 0-1 after six minutes after Odhran Kealey and Conor Gath exchanged points. Kinnitty settled down after this and three in a row from Colm Coughlan (2 frees) and Christopher Leonard had them level at 0-4 each after 11 minutes.

Scorers were harder to come by after this and both only managed three apiece in the next 21 minutes.

They were level on three more occasions with Coughlan's fifth free making it 0-7 each at the break and that interval score was a fair reflection of the way the first half scoring went.

Kinnitty began to play better in the second half, enjoying more possession and pushing forward. They hit the ground running with two Colm Coughlan frees and a super Aodhan Kealey point from play for a 0-10 to 0-7 lead after 40 minutes. Impressive sub Sean Kinsella got Drumcullen's first second half point in the 40th minute and Conor Gath's score pushed Kinnitty 0-11 to 0-8 ahead at the water break.

Drumcullen did miss some chances with Conor Gath off target with two frees while their cause was not helped with a couple of wides in open play. Kinnitty pushed on after this, getting five of the next six points and it meant that Drumcullen's late goal and a point didn't change the outcome.

James Demsey (Kinnitty): Once again Colm Coughlan's scores were pivotal to a Kinnitty win but there was something very impressive about the way James Dempsey performed in the goals. He made one excellent first half save from Colm Gath but it was not saves that got the eye. Instead, it was the way he controlled his area, read the ball, came out for it and nearly always found his man, setting attacks up from deep.

Colm Coughlan's 50th minute free put Kinnitty four points clear, 0-13 to 0-9 and the confidence to drive on for the win.

Both teams played a physical brand of hurling and they kept Brian Gavin on his toes throughout. Drumcullen in particular dished out some hefty challenges in the first half but Gavin quickly brandished yellow cards and they soon knew where the line was. As usual, Gavin got most of his decisions spot on.

While the 2020 U-20 championships have still to be completed, this was the last of the outstanding adult competitions. Hopefully, normality will continue to return and Covid-19 doesn't rear its ugly head again, resulting in more lockdowns.

Both sides had lively, passionate support at this game and they created a good atmosphere. It was great to see young people sporting the Drumcullen and Kinnitty jerseys with this particularly noticeable among the Drumcullen support. The O'Connor Park pitch was in excellent condition.

That concludes the 2020 senior “B” championship and both clubs look forward to the senior next weekend now.