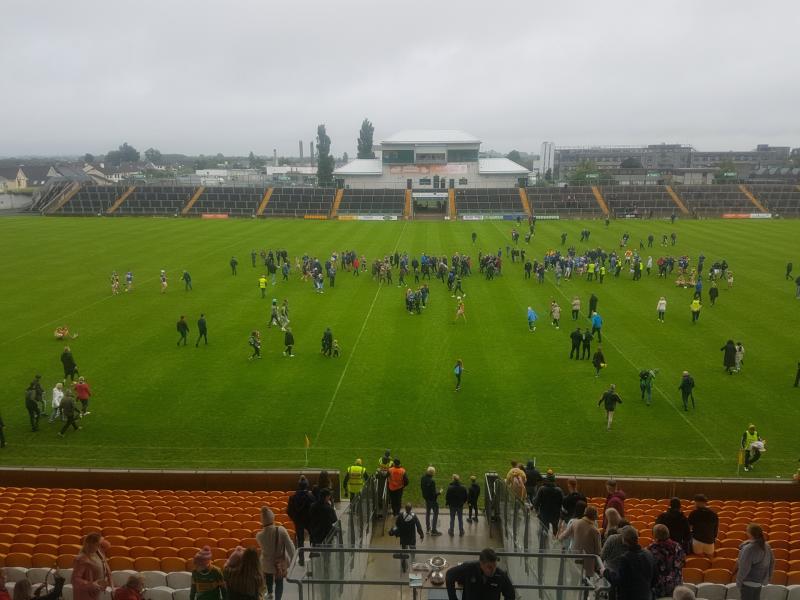 The scene in O'Connor Park after St Rynagh's beat K/K.

THERE was absolutely no disputing the superiority of St Rynagh's, the merit of their six point win as they outfought and outplayed Kilcormac/Killoughey in the 2020 Senior Hurling Championship final in Bord na Mona O'Connor Park this evening.

It was a final with a difference, a good nine months plus after it would usually be played but it was the usual story for St Rynagh's who gave a very accomplished performance on the day. They controlled most sectors, they had players standing up to be counted all over the field and they could have won by more than six points.

K/K tried hard but they didn't perform on the day and they had no hard luck story. They might complain at some of the punishment meted out to midfielder Cillian Kiely who was on the receiving end of a couple of hefty tackles but this was a peripheral issue and wasn't really a factor in the result – though it would have been tighter had St Rynagh's been reduced to fourteen men.

St Rynagh's were very tough on the day, they obviously were not shy in ruffling Kiely's feathers and as a unit, they fought tenaciously for everything and hit K/K with everything they had. It is a measure of St Rynagh's superiority that they never looked like losing this game for one minute, K/K never looked like winning it. Anything can happen in hurling but anything other than a Rynagh's win would have been a travesty.

While a late summer setting was ideal for a senior hurling final, the fact that this was a different type of final was evident in the sharpness on display. Both sides were fit and fully committed but didn't have the usual intense games in the build up and this was particularly obvious for K/K who were disjointed on the day, weren't clinical and sharp and never really built up a head of steam.

Over the course of the campaign, St Rynagh's have definitely been the best side in Offaly hurling in 2020 and they were very worthy champions.

K/K were always hanging on and it was clear that they were unlikely to win from a long way out. A Lochlann Kavanagh goal gave K/K a 1-1 to 0-2 lead after ten minutes but that was the high point of the evening for them. St Rynagh's had the wind in the first half and their dominance grew as it wore on.

K/K encountered free taking difficulties in the first half with Cillian Kiely missing two, Dylan Murray one and this prompted an earlier than planned introduction of Ciaran Slevin. St Rynagh's were on level terms, 0-4 to 1-1 by the 13th minute. Aidan Treacy's sideline edged them in front in the 17th minute and they really turned the screw after this. They played all the hurling and were 0-10 to 1-1 clear in the 25th minute.

By this stage Ciaran Slevin was on the field and he found the range with two frees as K/K cut the gap to 1-4 to 0-11 at half time.

The door was still open for them but they never looked like charging through it in the second half. K/K got four of the opening six points in the second half but St Rynagh's were keeping the scroeboard ticking over and they got their crucial goal in the 43rd minute. Aidan Treacy won the ball in the middle, Luke O'Connor raced forward and Aaron Kenny applied the finish after missing his first effort.

That gave St Rynagh's a very handsome 1-13 to 1-8 lead and they really should have killed it off in the next few minutes. Twice Luke O'Connor had the goals at his mercy, firing over the bar with the first opening in the 45th minute and then passing to Aaron Kenny when he should have took it on himself a minute later as the chance was lost.

Slevin (free) and Dylan Murray cut it to four points as K/K hung on grimly but Rynagh's battened down the hatches all over the field. Aidan Treacy and Slevin swopped frees and then three points on the trot from Treacy, one free, and a neat O'Connor score put St Rynagh's seven clear with time almost up. K/K got the final score from a Slevin free but in truth, they were a well beaten team.

It was a very competent display by St Rynagh's with a great work ethic and some outstanding individual performances. They will also have been delighted with the toughness they showed on the day and the fact that they won the physical battle. Aidan Treacy was brilliant for them, finding the range with his frees, getting one from play and working his socks off. He displayed real physicality, putting in a serious shift and some heavy hits. On a day when the hurling was not free flowing because of both the long delay and the wet conditions, his display was crucial.

Pat Camon had a great first half for St Rynagh's while Ben Conneely and Dermot Shortt both did everything that was required of them in a tight defence with Conneely oozing class and composure. Treacy was magnificent at midfield while he continued to work hard when moved to centre half forward and Joe O'Connor livened up proceedings with some of his first half runs.

Luke O'Connor had a fine game in the Rynagh's attack. He should have got a goal but he was lively, skilful, accurate and tormented the K/K defence. Gary Conneely had an excellent first half while Ronan Hughes also had good moments.

It is clear that K/K need to shake things up if they are going to get back on top of the Offaly tree. They had four subs introduced by the 47th minute, two of them the veteran Ciaran Slevin and Ger Healion and they didn't have many players reaching the mark set by St Rynagh's best players.

Damien Kilmartin was immense at times in their defence while Tom Spain did some very good things. Dylan Murray played well in spells at midfield and Cillian Kiely worked very hard, really trying to drive his side on in the closing quarter, though he will have been disappointed at his long range free taking in the first half. K/K were in trouble up front. With the vastly experienced Conor Mahon and James Gorman not getting into it and the Geraghty twins Peter and Thomas not finding top gear, it was young Lochlann Kavanagh who was their best player. He scored 1-3 and really troubled the Rynagh's defence while Ciaran Slevin and Ger Healion made a difference when introduced but the K/K attack did not play well enough as a unit.

Aidan Treacy (St Rynagh's): Aidan Treacy was a worthy winner of the man of the match award. He got seven points, one from play, but it was his work rate and physicality that really caught the eye. He did have a second half spell where he gave a few sloppy passes but he had a huge hour for them.

Aaron Kenny's goal thirteen minutes into the second half gave St Rynagh's a 1-13 to 1-8 lead at a crucial stage and also knocked the heart out of K/K who were still alive and kicking at that stage.

It was a big game for Adam Kinahan and he handled it well. Steady rain meant that underfoot conditions were tricky and there was a few frees not given. Cillian Kiely in particular got a couple of hefty belts that were not punished with cards and K/K will complain at that. Kinahan tried to let the play run and there were always going to be some talking points in these conditions but overall he handled it well.

The fact that the 2020 final was going ahead in August 2021 shows the extraordinary times we are living in. Both teams, however, were very well prepared and it was no less competitive than it would have been in a normal year. However, sharpness was an issue, particularly for K/K as the teams did not have the usual intense games they would have in the build up to a final.

Considering there was a fair bit of rain this week, the O'Connor Park pitch was in remarkable condition and the County Board hosted the final to perfection.

Both sides now focus on the start of the 2021 championship in two week's time.