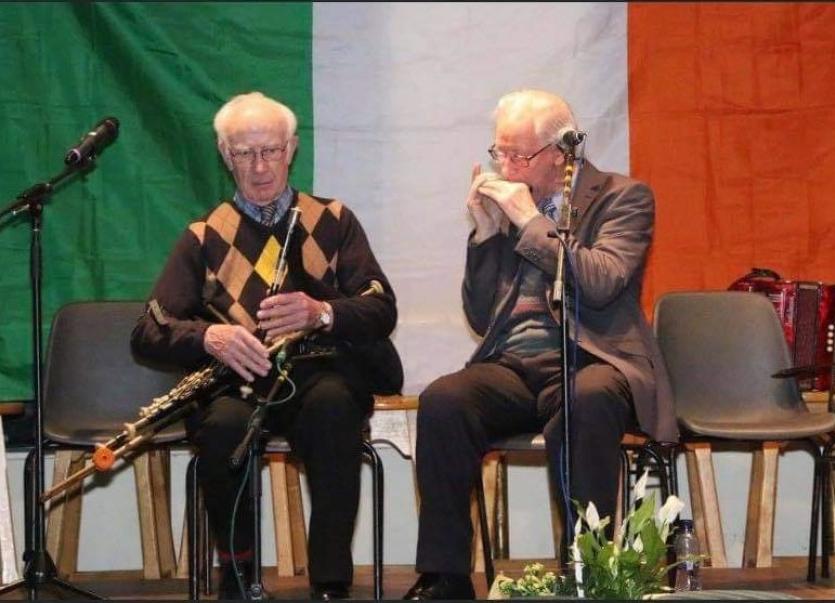 THE death has taken place of one of Tullamore's most loved citizens, a hugely familiar character who endeared himself to all with his quiet, personable and friendly demeanour. 91 years of age, Billy Dowling was the last surviving male member of one of Tullamore's most cherished families – he is survived by two sisters in addition to his own children, whom are all hugely respected individuals in Tullamore and environs.

He was a life president of Tullamore GAA Club and his presence on the streets of Tullamore was a familiar sight until a few weeks ago until the sad news emerged that his health had declined. Club activity in Tullamore has been suspended as a mark of respect to the deceased.

For a man of his advanced years, he was remarkably sprightly and alert, and he loved meeting people as he engaged in daily walks from his Chapel Street home around town and into shops. He remained active until very recently.

A brother of the late president of the GAA, John Dowling, Billy was a giant of life in Tullamore for several decades. A former employee of Salts (he later worked as a porter with a bank), he was a founder member of Tullamore Harriers Athletics Club in 1953 and he was a president of the Tullamore branch of Comhaltas.

Apart from his family, whom he was completely devoted to, his big passion in life was the GAA and Tullamore GAA Club in particular. He gave a lifetime of service to his club, as a player, mentor and adminstrator and his love for gaelic games was infectious.

He was a talented footballer and an excellent traditional musician. A long time member of Tullamore Comhlatas, he played the harmonica and won an All-Ireland medal when the Fleadh Cheoil was in Tullamore some years ago. He travelled all over the country for sessions and festivals and music was a hugely important part of his life.

The Dowling family grew up in the long gone East View Terrace, on the Arden side of town not far from O'Connor Park and Billy's own home was only a short walk from that in Chapel Street. He was a quintessential Tullamore man and he had a deep, abiding love for his town and everything associated with it.

Born in 1929, he was not long in gravitating towards Tullamore GAA Club and he featured on successful underage sides in the 1940s. He was corner back on the Tullamore team that defeated Ferbane in the 1948 minor football final – it was played in 1949. It was not long before he was making adult teams in the club and he was wing back on the side that defeated Erin Rovers in the 1949 Junior Football Championship final .

His job in Salts plus his marriage to Kilcavan woman Daisy O'Brien ensured that he didn't follow the emigration route pursued by many of his family and friends at that time. Indeed, three of his brothers, Mick, Joe and Christy Dowling went to the USA and they donated the Dowling Cup as the prize for the Offaly Senior Football Championship.

The early 1950s was a tumultous period for Tullamore GAA Club with several of their best players transferring to Durrow after a row with their club, apparently over shower facilities in O'Connor Park. They inspired Durrow to a Senior Football Championship title i n 1952 but Billy stayed loyal to his home club.

He won a Senior Football Championship medal with Tullamore in 1954, playing at centre half back and it was a particularly poignant occasion for Billy as it was the first time the Dowling Cup was presented – the Tullamore captain was the late Noel McGee. That was a hugely important success for Tullamore, coming just a couple of years after the split had rivited the club.

While they have remained one of the county's great dual clubs and one of its strongest football clubs, Tullamore were not able to recapture their earlier dominance from the 1950s on. However, they did pick up occasional senior football titles. Billy won a second medal in 1956, now playing at midfield but a new generation had emerged and Billy was gone by the time they won their next senior football title in 1963.

Billy and his siblings had inherited their GAA passion from their father Bill, who was a tremendous Tullamore GAA worker for a number of decades – he stepped down as president in 1965, a role Billy later filled with great pride.

John Dowling was the most famous member of the family – he was Tullamore GAA secretary, Offaly GAA secretary for many years, Leinster Council chairman and then GAA president for three years from 1988. Billy was very proud of John's achievements but they often disagreed on GAA matters. John was a staunch GAA official and the rule book was king for him at all times whereas Billy believed that some rules were meant to be bent – and they had a number of interesting discussions over various issues over the years.

After his retirement, he served the club in a variety of capacities. He was on committee and he was a mentor on several championship winning teams. He had a quiet, gentle manner and he was very fair in his approach and dealings with players.

Considering his love for the GAA and the associaion of the Dowling family with the games, it is ironic to note that both John and Billy Dowling were founder members of Tullamore Harriers Athletics Club in 1953. John was the first Tullamore Harriers chairman and retained that role until 1959 when he stepped down because of his growing GAA commitments – he was also an All-Ireland final referee.

Billy was a founding member of Tullamore Harriers because of his friendship with their famous secretary Paddy Larkin. Paddy Larkin also played football and hurling with Tullamore, before falling out with them after athletes from the Harriers were denied permission to train in O'Connor Park – they had been allowed train there for some time after their formation.

The two worked in Salts. Salts was a huge employer of almost 900 people at that time and one of the mainstays of life in Tullamore for decades. There was a thriving athletics club in Salts at that time, led by Paddy Larkin and others and a young Billy participated in some of their races and events. Prior to the formation of Tullamore Harriers, an athletics club called Columban had been in existence but they had a small membership and by the time that they ended, they seem to have been more focused on social events than athletics ones.

It was in this environment that a group of young men took the brave step of setting up a rival athletics club and Billy Dowling was at that fateful meeting on November 13 1953 in Clarke's Hairdressers on William Street – a subsequent long time chairman Noel Gowran was employed there at the time and they were invited inside to the warmth by Oliver Clarke as they gathered outside in William |Street.

Billy and Paddy Larkin were best friends in those years. The late Paddy was a motor cyclist enthusiast and they travelled all over the country with Billy as a pillion passenger. He retained great memories of one trip to Kerry with Paddy and another famous Tullamore GAA stalwart, Alo Kelly, throughout his life.

They were keen dancers and in an era when showbands were huge and carnivals took place all over the country, they had a very active social life. Him and Paddy took dance lessons and went to regular dances in St Mary's Hall and the Grand Central Ballroom (where Fergie's pub is located now in the Market Square). Their friendship was so close that Paddy Larkin was the best man at his wedding to Daisy O'Brien in 1957 – he had a deep love, affection and commitment to his wife and was devastated at her death a few years ago.

While football was always his priority, he enjoyed running and he remained involved in Tullamore Harriers for a few years after their formation but after getting married in 1957, he drifted away – as him and Daisy settled into married life and began to have a family, he couldn't have too many irons in the fire and GAA was always going to win out as his sporting outlet, as it did a couple of years later with John.

Tullamore Harriers was to develop into a powerful force and they staged huge concerts in those early years with bands such as Clipper Carlton performing in front of up to 2,000 people. Billy helped out at those – the club later ran a hugely successful carnival that was an essential part of Tullamore life throughout the 1960s and he also assisted at that.

Billy Dowling was extremely pleasant and easy company. He was obliging and he just had a very impressive way about him. He exuded decency and lived his life very well.

His contribution to Tullamore GAA Club was profound. He was such a familiar figure there and loved attending games and training. He provided a very reasoned voice at AGMs and meetings – he didn't try to dominate or force his views but when he expressed an opinion, it was always well thought out and as such it held considerable value. He really was a “true Blue”.

He leaves a treasure trove of great memories and will be particularly missed by his children and grandchildren. He will be buried in Tullamore on Saturday after 11.15am Mass in the Church of the Assumption, located just a few metres across the road from his house. May he rest in peace.